Devil in a Blue Dress at Goodreads 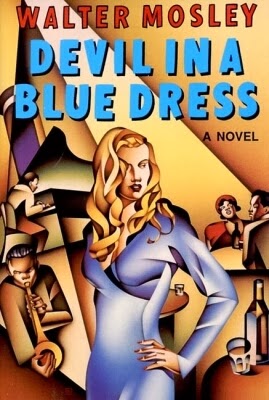 Devil in a Blue Dress at IBList

Lauded for strong characterization and solid writing for a first novel, I have no observations to contradict the popular opinion the novel received on its initial release. What makes this quick read so intriguing is not the mystery plot, but our narrator Ezekial "Easy" Rawlins. His post-war instability, genuine smarts and his admission to mistakes in dealing with the investigation of the titular "devil," crystallize the narrative and transcends it beyond plot. The novel has attracted attention not only because it is well written, but because it is an important work in African American fiction, and also due to the interesting elements of his post-war stability and a "voice" that speaks to him at moments of overwhelming stress, also likely a consequence of post-war trauma.

As a mystery I found it unremarkable and at times even frustrating. Rawlins is well ahead of the reader in his thought process, which appears contradictory since narrator and reader are close and comfortable. We lose out on deliberation and the detailed process of putting the pieces together. Instead Rawlins can blurt out, in relating a conversation, "So-and-so was behind this-and-that!" Rather than generating surprise, shock and the expected response, "It was So-and-so!" I wanted instead to roll my eyes. This complaint is, however, a minor point, since there is nothing deceiving in the presentation of the plot. The mystery even becomes secondary as I found myself more interested in Easy's war-time experiences and many of his reminiscences of 1948 Los Angeles that I at times lost interest in the murder. I was hoping his instability would complicate his investigations but he manages to keep sanity in check. The presence of the truly unstable and immoral Mouse help to balance Rawlins's own mental issues, and keep him grounded and alert.

Though cardboard, characters are well portrayed and I like their diversity, especially since they are for the most part despicable. I like Rawlins mostly because of his flaws, but I do wonder how he manages to compose such a clear narrative of events. Must be that soothing yard and home that triggers his involvement in all this. I might even read the novel's follow-up, A Red Death. 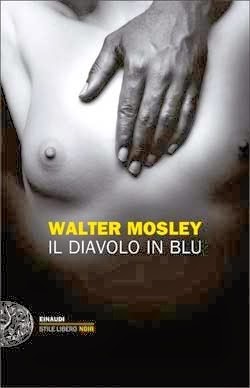 And here is the cover of the Italian translation. Quite a different approach from the English language copies I've seen. While those emphasize jazz, blue dresses and black men, this one displays passion and race.
Posted by Casual Debris at 11:30 PM

I recently read my first Mosley novel, and it's a much later one. I found that it often seemed like it had more style than substance. I've been curious if the earlier novels had less of this problem, but it sounds like you had some issues with it. I haven't quite made up my mind about him.