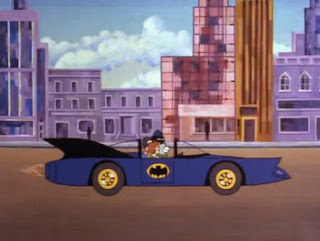 
Information on DC superheroes abounds online by more knowledgeable sources than I, and rather than discuss backs-story or even criticize interpretations of our heroes, I am reviewing these episodes as though they act as stand-alone superhero fare, and with the belief that readers have enough background information for it all to make sense.

The 1973 incarnation of Super Friends, the first televised interpretation of members of the Justice League of America, was, like all Saturday morning cartoons, aimed at children. The successful production team of Hanna-Barbera (The Flintstones, Scooby Doo, Where Are You?, The Fantastic Four and countless other animated series), managed to borrow from the JLA enough to produce a kid-friendly show. Super Friends and its various spin-offs like Challenge of the Super Friends were highly popular, and yet most were limited run series. Though the show features on four of the vast number of JLA members, it nonetheless maintains many similarities with the early comic, written by Gardner Fox and illustrated by Mike Sekowsky. 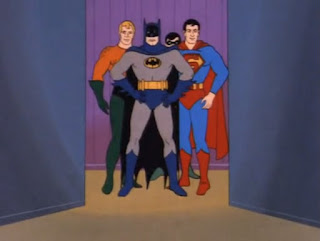 The early JLA comics featured the (annoying) teenager Snapper Carr to help bring young readers closer to the our adult heroes, while Super Friends used a similar tact in creating the Wonder Twins: Wendy and Marvin, along with Wonder Dog. Wendy at least had some investigative sense, while Marvin and Wonder Dog acted like a Shaggy and Scooby pair in an attempt to draw laughs from a more serious adventure cartoon. I like the bright and round-eyed Wendy, but I could do without Marvin and his canine sidekick. There are too many Scooby antics featured in the series that detract from the main plot. The antics were part of the Super Friends formula, and each episode seemed to have been allotted a specific antic time-frame.

(Incidentally, I would be interested in knowing why Aquaman was selected as part of the quad over the likes of other original JLA members Green Lantern and The Flash. Perhaps easier animation or opportunities for environmental messages? I liked Aquaman as a kid in the 1980s, but as an adult I recognize his limitations. I preferred the Aquaman interpretation 2001 Justice League series.)

Other similarities with the early JLA comics include aspects of both artwork and writing. The show features poor humour amid high levels of action, constant collaboration between the heroes (hence a good idea to limit the characters to four), often exaggerated alien enemies, and constantly shifting physical proportions in the characters, who at times have thighs wider than hips or suddenly appear to age. 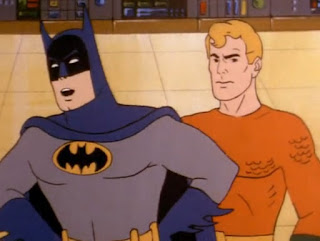 Episode one features a blatant message to young viewers: using your brain can be more important than using your muscles. Batman: "Don't forget, not everyone has super strength but everyone has a brain. You can do super things with your brain." (Is it just me or is the way Batman/Olan Soule enunciate "brain" sound terribly odd, as though his was impending speech? Not to mention the way he says: "Wonder Woman! She's in trouble!") Wonder Woman: "The only thing that can surpasssuper strength is the power of the brain." Aquaman: "We've depended on using our muscles when we should'be been using our brains. The importance of smarts is emphasized by strengthless Wendy who proves to be brighter than super detective Batman.

Aside from messages about using our brains, the 1973 episode features environmental concerns over energy consumption. At the opening of a nuclear power plant, the speaker informs his audience that the plant is a "solution to our ever-increasing energy needs." The plot features an alien named Anthro from the planet Traum who is stealing Earth's energy in order to re-supply that of his own race, who have squandered their energy sources. The episode teaches its young viewers that while we cannot stop sing energy, we should us it wisely. The message was and still is an important one, and the montage featuring Marvin and Wonder Dog clearing home of electronic equipment and then instead better using the equipment is a good visual aid. 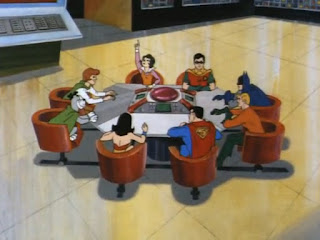 It was the clumsiness of it all that kept it from being great, though I certainly would still take it in fairly frequently at the time. While there was an adult audience for the source comics (and always has been), the default assumption was that the stories in the comics were aimed at kids as well...which didn't mean they, too, couldn't be instructive and Gritty (as both DC and Marvel strove to prove in 1973, to varying degrees of success).