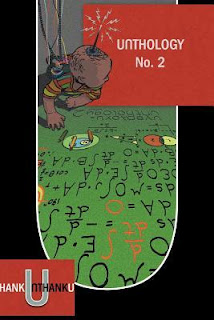 Unhology 2 at Goodreads
My review of Unthology No. 1 is over here.

This edition of Friday's Forgotten Books has something recent released under the mainstream radar.

It took me some time to get through volume two of the Unthology anthology published annually by Unthank Books. There's something about the dense print and the odd minimal spacing between paragraphs that I just don't like. If we're trying to reduce space and page numbers we can eliminate the individual story title pages which aren't necessary, otherwise I don't see the purpose of such compressed print. My vision is 20/20 and I don't expect something along the lines of the Magnum Easy Eye Books, but something a little more aesthetically appealing and, since I do read a fair amount, less straining to the eye.

Content-wise (which is also important) Unthology No. 2 is on par with its predecessor. While there are some fine and varied stories, many do fall a little flat. The problem with trying to be different and offering less of the same is that not every story will appeal to every reader. While no story is strictly bad, there are just some that I simply, within the boundaries of my own eclectic tastes, did not care for. Variety is the winning force, something the Unthology has so far proven to contain more than other periodicals, and variety forces the brain to work a little harder. My favourite stories include the non-experimental opening story by Sarah Evans and the surreal "Siramina" by M. Pinchuk. Other strong entries are those by Melissa Mann, co-editor Ashley Stokes, and the closing story by Joshua Allen.

At the end of his bachelor outing in Prague, Simon is stranded for an additional day due to severe weather conditions. Tensions with his bride-to-be and panic over being trapped in matrimony send the thirty-or-so year-old to wonder about a possible last fling with a pretty girl he's just met.

There is nothing terribly original about "Stuck," and nothing experimental in terms of what the editors seem to be seeking, but it is nonetheless a very well written piece and a great opening story to any anthology. The title works on several levels. Simon is stuck in Prague as well as in a relationship with Selina. He is stuck in a unvarying profession and life routine of weekend drinking bouts that marriage threatens to eliminate, only to replace it with another routine to keep Simon stuck. Most integral to the story is that he is stuck in a moral quandary, not in his pursuit of matrimonial bliss but in how far can he go with this new woman without crossing any obvious boundaries. These considerations are complicated by Simon's all-around averageness, his inability and unwillingness to seriously consider the dilemma, and even drinks a half a glass of wine in order to not have to think too seriously about it. He cannot make a decision and wants something to happen, possibly in order to "save" him from this impending union he doesn't seem to really want.

The story itself doesn't plow into the philosophical considerations of Simon's thoughts, but follows him as he forges ahead, simultaneously with purpose but lacking direction. The story offers no answers and acts more as a kind of character sketch; there are no wrenches and no surprises, just the numbness of someone who has, in an array of ways, become stuck.


Differences in Lifts by Lander Hawes. 6/10

In a paranoid totalitarian society, where citizens are ruled by police and regional councils, notions of responsibility and friendship are challenged. I like the story for its approach to theme. Skewed notions of responsibility are presented in a society where citizens are made responsible for their actions to the extent that the fire department has been dismantled and people must walk around at all times carrying a bucket of water. The story also features a strong revelation of the narrator which implies this society is the result of human nature, that as a race we lack the ability to be responsible even for those around us. My problem with the story is that it is in need of a desperate re-write.

When I first started the story I had to put it down before finishing the first page. I was frustrated with the awkward wording and sloppy sentences, and wanting to give the story a fair chance, I put the book down for a few days. I returned to the story prepared for the flaws, and managed to get through and enjoy it.

Let's look at some sentences.

Opening sentence: "In the office where I work there are two lifts, positioned next to each other at the rear of the lobby." Aside from the unnecessary comma that acts as a misplaced speed bump, there are far too many needless words. "In the office where I work," first of all, sounds like a literally translated sentence, whereas "positioned next to each other" is not specific enough, and my brain placed them at one point side by side and at another facing each other. Overall the sentence begins with the information that we are at an office, then mentions the two lifts, only to return to location with the insert of that lobby. Using the author's own vocabulary I would recommend: "At my office lobby there are two lifts positioned side by side." Of course we can play around with this, attempting something like, "Side by side at my office lobby are two identical lifts" ("identical" I borrow from the next sentence to add an element of mystery).

The story is filled with many unfortunate word and phrase errors, so that the narrative, like an old rickety elevator, is a bit of a bumpy ride. Yet I will commend the author for that great side-swiping sentence introducing buckets, and would suggest it or a slight variation as the story's opening line: "It was around this time that the county council changed the health and safety regulations, and we all had to start carrying buckets of water." Precious.

Ian works at a help line, struggling with calls as he has his own tragedies to deal with, tragedies that come to the fore when a woman named Anne calls. A good story, though I am confused with the last paragraph and can't quite get the tone. I blame myself here and promise a re-read.

During his stay at a sanitarium, an alcoholic listens to the tribulations of other addicts, from sex addicts to those with obsessive compulsive disorder, and has even taken up knitting to bide his time and keep his hands busy. Both serious and amusing, "Gottle O' Geer" is a well written cynical sketch on our sense of self and a societal system that has little to offer in helping us deal with our real problems.

The view from Adrian's apartment window looks into the window of the unusual man known as the "Swan King." The Swan King is normally seated behind the glass, staring directly into Adrian's room, upsetting girlfriend Zara, who is convinced the odd neighbour is responsible for the disappearance of university student Elaine Preece. Well written and well developed, I feel it should nonetheless be shorter, hence losing some of its middle monotony, and perhaps eliminating that opening that reads like a prologue but adds little; the closing paragraphs did not require the opening scene. A few other moments I felt didn't grab me, either a paragraph or a series of thoughts, but overall it is a strong, thinking story, with tight prose and some nice play on expectations.

Stokes wrote the good "A Short Story about a Short Film," which appears in the first Unthology, reviewed here.

Narrator tells of a buddy's experience in a small town in southern Poland, when the friend was lured away from nine hundred and something dollars. Things do come around. While I like listening to such tales, I didn't feel this one added much to the travelogue, and I found the writing a little too self-conscious, unnecessarily attracting attention to itself and away from the narrative.

A satire on poetry and art. I gave up early on this one, unable to get into it, primarily as the humour is not to my taste. The story quickly reminded me of that terrible Aldous Huxley novel Antic Hay which I barely remember so perhaps the relationship between the two is tenuous.

An overnight encounter, an urban tale of birth, renewal and second changes. Some nice moments but overall a little flat. I prefer West's story "Paralax" from Unthology No. 1.

A westerner living in a commune in a homophobic Sultanate searches for a fling while trying to evade those who wish to entrap him. Solid prose, but like the previous story a little flat.

Another short piece, but this is more than a sketch, involving a retired English professor, an obscure (fictional) poet and the mysterious death of the professor's brother. Mysterious, subtle and quite good, with some nice plays on time and tense. Like the opening story, the title of this one encompasses various instances of recovery, such as recovering a manuscript, the past and the truth concerning an old tragedy. The opening is great, with the professor seeing the world without his glasses, telling of the uncertainty of the universe and the unreliability of detail, as it stares us straight in the face, yet we nonetheless can't always see it clearly. The professor, the inspector investigating the brother's death, and the poet all search for detail, while the reader wonders whether there is such a thing as clarity.

A gentle and surreal piece of a tourist visiting an unmapped island by the name of Siramina, in search of its only hotel. The story is haunting and engaging, and manages to present us with a potential horror that becomes somehow welcoming. The stranger wandering through a maze-like town is reminiscent of Kafka and other, lesser-known Eastern European contemporaries, and can be a metaphor for so many things.

A short and amusing sketch of seven people living at Number Seventeen, whose harmony is about to collapse due to a simple act of human nature.

The paranoid journal of an Aryan idealist, intelligent yet mentally unstable, who spends much time at the library ruminating over various permutations of hierarchy among men. Disturbing in its seriousness, yet nonetheless comical in its exaggeration. While we cannot sympathise with the modern Nazi narrator, we can be amused because he is such a caricature of paranoia and angst. A character I would certainly have followed for a longer narrative, and a solid finish to the unthology.