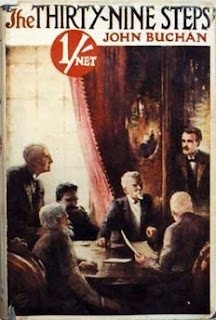 The Thiry-Nine Steps at Goodreads.


John Buchan's short novel, written while he was laid up, suffering from something called a duodenal ulcer, is an improbable spy thriller chase story. At times comical with the occasional moment of suspense, the spy thriller genre has advanced to all lengths of complexity that The Thirty-Nine Steps feels incredibly tame and occasionally silly. Thankfully it is short. What saves the novel from being more than a pulpy joke is the solid writing and the charming narrator. My favourite sequence is the opening, where our Scottish hero Richard Hannay (Buchan too was a Scot) is describing his incredible boredom. He sees a homeless man yawning and gives him some change in an act of pure empathy. 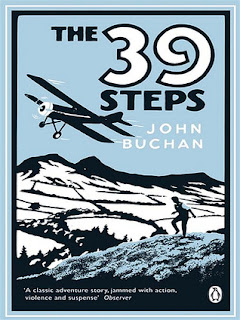 The amount of coincidence and luck that the story relies on is, by modern standards, not just unbelievable but, sadly, a little irritating. Hiding in the moorlands Hannay happens to meet someone he knows. He happens to stumble upon the hooded owl's lair, happens to find explosives when convenient, happens to walk into a Sir Walter's house in time to see one of the bad guys in disguise, and so on and so forth. Nearly every plot element relies heavily in such unlikely fortunes, that a modern reader will soon grow weary of the tale and wary of its author. Despite these shortcomings, and if you can manage to swallow the coincidences, as a quick, charming read, it manages to be good fun.
Posted by Casual Debris at 9:55 AM