Tales from the Darkside Season 3: Episodes 17 through 22 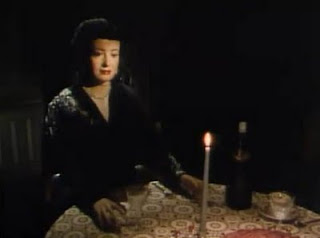 "Should've been just another Thursday."

Divorced man Roberts spends his evenings at the local watering hole. One night he goes home with drinking buddy Curtis who has hijacked a display mannequin from work. An evening of hilarity between two drunk and lonely men brings out some odd emotions, and at the end of the night, while Curtis dances with the mannequin, Roberts feels oddly jealous and a bit of a third wheel. Yet what was supposed to be a silly night of fun turns truly weird when Curtis ends up moving in with the dame, and confides to Roberts that she does not let him do anything. Based on a more recent short story by the great Robert Bloch; it is the second of three stories adapted for Darkside. Interestingly, the three adapted stories are from varying points of his career: "Beetles" (Weird Tales, December 1938), "A Case of the Stubborns" (Magazine of Fantasy and Science Fiction, October 1976), and "Everybody Needs a Little Love," which was still fresh at the time, originally published in the first installment of Jerry Williamson's successful anthology series Masques in 1984.

Using elements of film noir, from the interrogation framing, liberal use of smoke (mostly from cigarettes), delivery of lines, jazzy music and shadows, "Everybody" is an excellent episode with strong performances by busy character actors Jerry Orbach as narrator Roberts, and Richard Portnow as Curtis, as well as good use of the mannequin, with some nice shading and good editing that help give it the semblance of life. Indeed, with his thirteen years as Detective Lennie Briscoe on Law & Order, we easily forget what a talented actor Orbach was. Director & writer John Harrison, the man behind the terrible "The Satanic Piano," including its awful music, does a great job with the script, and does well in keeping many of Robert Bloch's own words which translate well onto screen and into Orbach's mouth.

Two witches from Salem, Massachusetts, meet every year or so to exchange the precious amulet that gives the wearer great success. Not much happens here, just some dialogue that paints a portrait of eighteenth century Salem as though Arthur Miller's The Crucible were the most reliable historical document for the period. Even character names are appropriated, and I couldn't tell if it were for fun, an attempt at cleverness, or if this appropriation was an honest form of research. All in all a poor episode, with some lukewarm attempts at humour, though the pair of unfamiliar actresses do well in their respective roles.

Apprentice shoemaker Rob dreams about making a fortune and living the life of the social elite. He stumbles upon a pair of shoes that, thanks to the (unexplained) magical touch of his employer, offers him a route to this dream. Meanwhile his doting fiancée Gail is saving up for their life together, while his employer reassures him that he is living the life he is destined for. We must live the lives we are destined to live, this little story is saying, as though life and destiny were simple matters. Thematically obvious as well as thematically flawed: it negates the idea that we should make the best of our lives and attempt to achieve something of importance, but we should instead squander our time within the meagre boundaries we were born into. The magic is too broad, in the sense that the writers feel they can get away with anything they want simply because it is magical, while viewers like me groan and quickly lose interest.

The magic involves some special little nails hammered into the appropriate shoes, which give its wearer the ability to achieve fortune. When Rob puts the shoes on his entire dress is suddenly transformed, and even his hair is different, so that the shoe is not destined for a specific individual, but works its magical wonders on whoever happens to be wearing them. Yet [spoiler] when Rob wears the shoes that are destined for a specific individual, and we learn that the specific shoe-owning individual has died, Rob too dies. This twist makes no sense; it has nothing to do with anything. Essentially it indicates that the wearer affects the shoes, yet what does the nail pounded into the shoe have anything to do with the person who has ordered those shoes? If you ask me to review your story and I do so with my magical keyboard, but a third party sneaks in and changes the review to his story, so that when you die he also ends up dying... How idiotic; this nonsense is truly headache-inducing.

"You don't want to be an ugly old frog all your life, do you?" 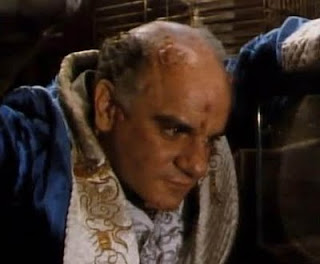 The first of two Darkside collaborations between John Drury (the only thing he seems to have directed) and writer Richard Benner is a good effort; a common though neat idea that has many problems in its rendering. In the Louisiana bayou, be-warted son of a witch Bubba (successful stage actor Charles Ludlam, who passed away three weeks after the episode first aired) is searching for the missing ingredient to a potion that would transfer his soul to a more attractive, and younger, body. His beautiful wife Annabelle (Maria Manuche) has married him for his money (his departed mother had "found" oil in the bayou swamp), but in accordance to their marriage contract must suffer her ugly husband's lustful desires night after night or forfeit the inheritance. And of course she would rather be bedding studly handyman Claude Altoose (James Wlcek). Meanwhile, the Louisiana sanctity of marriage, as well their own contract with its many clauses, are overseen by Judge Jean Baptiste (Timothy Jenkins). All of these details are clearly rendered, and it appears to be a good, methodical script that manages to maintain a smoothly flowing plot as it divulges the complexities of this triangle (or square, if you include the judge). However, the episode suffers from being painfully slow, with the final denouement running for too many minutes, that despite some suspense at the half-way point, we end up figuring out far too early what is really going on, leaving the latter part plainly uninteresting.

The set and direction are good, though Claude's own room is just silly and a little too colourful; clearly not a room his character would have lived in. The play opens up with a shot of Bubba's mother, nicely framed, and soon reveals glassed-in bullfrog, and the camera pans over to a pretty little caged cockatoo. We listen to Bubba's voice-over, and when we see his warty hand we immediately link him to the bullfrog wishing to be a cockatoo. Nicely done indeed. There are a number of good visuals and other allusions to this effect, such as Annabelle calling Bubba a "bull" and the thin and blonde Annabelle's own likeness to a cockatoo (her name, in essence, is "the beautiful Anna"). The Louisiana accents are too much and at times uneven, while the sound is of poor quality, with Bubba's voice drowned out during the opening scenes. Too bad since this could have been a really good one.

Drunk in the honeymoon suite following the reunion of his high school class of 1958, Harry Carson suffers a heart attack and dies. It seems a straightforward act, yet there is some confusion between the minions of heaven and of hell as to which realm he must now ascend, or descend. Hilarity ensues. Well, not really, but that's probably what the directions in the sad little teleplay called for. Director John Lewis tries his best, with a few nice mirror shots (notice early on the warped figures of Carson and the bellboy to the right of the screen), but there is so little to work with that the episode is an embarrassing mess. While David Groh as the angel and Earl Hindman as Carson (Mr. Wilson from Home Improvement) are fine in their roles, successful broadway star Jane Summerhays is at times painful to watch. Overall among the worst of the Darksides.


"The Enormous Radio." (First aired 17 May 1987) Directed by Bill Travis. Written by Guy Gallo from the short story by John Cheever. Starring Christine Estabrook, John Rothman and an enormous radio. 7/10 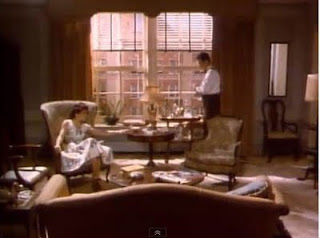 With their brand new, top of the line, enormous radio, Jim and Irene can listen in on their neighbours' apartments. What begins as a little fun becomes for Irene an obsession, as she begins to see that people all over do little else than suffer. Based on the often anthologised short story by popular American writer John Cheever, this teleplay once again proves that Darkside produces better episodes when adapting short stories. There is nothing shocking plot-wise, yet this is among the most horrific episodes in that it's philosophy reveals that humans are destined to treat one another poorly; we are prone to gossip, to cheating and stealing, and becoming aware of the vices of others is an act of becoming aware of our own. People are alike all over, and our similarities are seen through our selfishness, lack of self-control, and our base treatment of those around us. The final shot is terrific, with the arguing voices of Irene and Jim playing ironically alongside the lovely music of the "Ode to Joy."

The set is well constructed. The home is tastefully decorated with every detail eliciting the 1950s, from the rotary telephone to the issue of Life Magazine that sits on the coffee table. There are also some fine establishing shots that open the play, from the smiling faces of contented Irene and Jim as they listen to Schubert, to the mixing of drinks, neat little radio and everything else that points to a comfortable home. Actress Christine Estabrook is excellent (and attractive) as Irene, while character actor John Rothman is a little uneven as Jim (Rothman had a small part in season one's "The Tear Collector"). There is also a brief cameo by successful Irish stage actress Kate O'Toole.