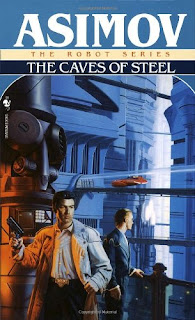 A review of The Caves of Steel contradicts the Casual Debris Three Laws of Reviewing:

Yet there is one additional Law that over-rides all other Laws: This is my site & I will review whatever I wish to review.

Having made that clear, I will add that my approach here will not be generic: I don't plan on discussing whether The Caves of Steel is a better science fiction novel or mystery novel (I vote sci-fi), nor will I speculate on the science or sociology since Mr. Asimov is a better scientist than I, and I just don't feel like discussing the sociology. The work was first published in 1953 and set some millennia in the future, so if we wish to discuss the (in)accuracies of either, we can place the novel through contemporary filters and criticize it for not including any descendants of cell phones, or for the silliness in the boy's speech ("Gosh golly gee!"). It was that dark age of 1953, after all, and we can therefore forgive details such as ALL the cops are men, while women appear best suited for dietetics and gossip, and everyone in New York City seems to be white. But I digress.

What I would like to do is simple enough: liken The Caves of Steel with another popular work of fiction: William Shakespeare's Hamlet, Prince of Denmark.


"He was living in an unreal world, a cruel, topsy-turvy world."

Just like the great Dane himself. Like Prince Hamlet, Asimov's protagonist Elijah Baley unexpectedly finds himself in a world turned upside down. In Shakespeare, Hamlet awakens to a kingdom that is ruled by his once-uncle-now-father, as his father's ambitious brother Claudius ascends to the throne and becomes kings, and ascends Hamlet's mother Queen Gertrude to become Hamlet's new father. A horrible existential crisis ensues.

With Asimov we find a New York City cop awakening to the reality that his new partner is a dreaded robot, his job is close to being jeopardized, and his wife is part of a revolutionary group. While robots are as clearly discernible from humans as any visual interpretation made in the early 1950s, Baley's new partner, R. Daneel Olivaw, is an accurate replica of the human form, essentially confronting Baley with a notion not easily conceivable to humans at the time. Like Hamlet, Baley spends the first part of the story being completely ineffective, trying to grasp the idea that the world has transformed almost overnight, that the relationship between the hated Spacers (humans who have long since colonized nearby planets) and the desperate Earth dwellers has moved to a whole new plateau, and in order for civilization to survive, there must be collaboration between two parties that have done their best to exist independently from each other. Elsinore, the Danish royal castle, is its own isolated community, similar to the cave of steel that is NYC, and while Spacers and Earthmen are heading toward a kind of union between separate states, with Prince Fortibras ascending the throne at the play's end, Norway and Denmark unite. 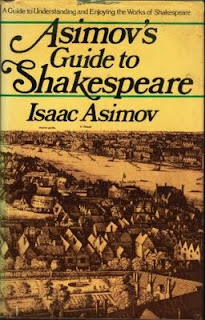 Asimov was well read and familiar with the works of Shakespeare; so familiar he devoted some fine research on the playwright in the form of Asimov's Guide to Shakespeare, volumes one and two, offering over eight hundred hardcover pages of synopses and interpretations. The work, originally published by Doubleday in 1970, went largely unnoticed (what serious academic would read a work on the greatest literary figure written by, of all things, a science fiction writer?), and while Asimov was never considered the greatest authority on the Bard, many have since admitted that there is value in this tome. Now, I'm not suggesting that Asimov intentionally wanted to write a futuristic version of Hamlet, but being familiar with the story and its details surely helped form The Caves of Steel.

And finally there is the writing. Compare these two statements on the state of the world: "There is something rotten in the state of Denmark" (Hamlet, Act 1, Scene IV), and "He was living in an unreal world, a cruel, topsy-turvy world" (The Caves of Steel, Chapter 13). These are shockingly interchangeable: "There is something rotten in the cave of New York;" "Hamlet was living in an unreal kingdom, a cruel, topsy-turvy kingdom." In fact, I would not be surprised to learn that the Bard coined that topsy-turvy term.

Posted by Casual Debris at 8:38 PM

Email ThisBlogThis!Share to TwitterShare to FacebookShare to Pinterest
Casual Labels: Asimov Isaac, Caves of Steel the