Tales from the Darkside Season Four: Episodes 8 through 13

(The title reminded me of a popular joke from The Simpsons.)

On a windy, wintry night, the Strands are at home arguing: father Henry, baseball card collector, is ashamed of studious son Seymour, who likes to knit, while mother Ellen tries to keep the peace. Well, there is a knock at the door and in barge Ambassador Chia Fung and his assistant Madame Wu claiming that Seymour is the next Llama of Lo Pu. Within minutes Seymour is no longer the shy and studious son, but, after finally getting, uhhh... rolled in the hay (off camera and implied only, of course), he immediately seizes the newly-offered power and uses the opportunity to get back at dad. From the same pair that brought us season four's sixth episode, "The Grave Robber," this one is also an almost okay comedic script with passable performances. Divine is dragless and David Gale is amusing in that knitted sweater. 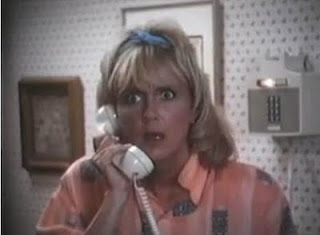 This is the second of two Darkside stories involving Stephen King. The first was an adaptation of his short story "Word Processor of the Gods" (Season One, episode eight), while "Sorry, Right Number" is an original teleplay, and by far the superior of the two. Like many King stories, this one deals with a family in the midst of crisis, in which father is a writer and the loving couple have three children. Unlike most of these stories, the protagonist here is the mother. Katie Wiederman is on the phone with her sister Lois when the other line rings and there is a woman sobbing at the other end, yet after a few phrase snippets, the caller hangs up. Katie is certain the call was intended for her, and that it came from a distraught family member. She takes it upon herself, and her husband Bill, to figure out who tried to make that call.

Genuinely suspenseful, the script is tight and fluid, and Deborah Harmon offers a great performance as Katie, while Arthur Taxier looks a little like King (only taller) as über successful horror author Bill Wiederman. (Long-time TV actor Taxier played Skelly on the movie pilot of the 1985 Alfred Hitchcock Presents, in the segment remake of Henry Slesar's "Incident in a Small Jail.") Strong chemistry between the leads makes it easy to believe they have been together a long time, and good interaction with the children adds to the effect. Sure we can figure out the ending before the great reveal, but not as early as in most Darksides; in fact, I didn't catch on until near the end, though many will be quicker than me. (This delay on my part is testament of how absorbed I was while watching.) Despite the somewhat predictability, King did an excellent job with this one, enhanced by the strong direction of John Harrison, the man behind a mixed batch of Darkside episodes, not to mention some terrible music. The music in this one sounds almost as though it were trying to be playful, which is quite effective.

Interestingly, the movie Bill Wiederman is taping for his son, the one based on his first novel, Spider's Kiss, is actually George A. Romero's own excellent Dawn of the Dead. Remember, Romero was the producer of this series. Also, the voice on the phone was performed by Catherine Battistone, who appeared in several Darkside episodes, though doing primarily phone work.

Ambitious New York City telephone bill collection agent Jeanette Simpson receives an odd call on her private line, coming from one Rita Vasquez. A quick search in her impressive 1987 PC reveals that this Rita person is deceased. Arriving with a package is Michael Nelson, who bears a cheque from... I'll give you three guesses... no, not the Expository Devil, but from the infamous Rita V. Creeped out and maybe a little lonely, our heroine Jeanette convinces Michael to stay for dinner so that she can feel safe, and so we can have some characterization without poor Jeanette having to talk soliloquize. Character development offers up an obviously bland and overt morality lesson. This piece of nonsense fantasy is saved by a good performance from unknown Maura Swanson as Jeanette, whose character actually travels through a variety of emotions in only about twenty-two minutes. The rest is painfully ridiculous.

"Betsy, you were the prettiest girl in our class." 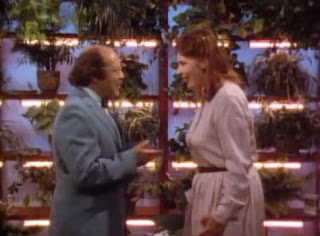 Overweight and lonely, Betsy Cowland has tried just about everything to lose weight, and just when her old high school flame Elmo Shroud is in town wanting to visit, she receives a call from Your Weight Is Over with a sure-fire weight-loss opportunity. The method is simple: with the help of a specially designed hearing aid and later some nifty eyeglasses, our dear Betsy can hear and see her food as though they were alive. Imagine trying to eat a friendly banana.

Another of Darkside's odder tales, "Love Hungry" is extremely enjoyable, with excellent performances by by Sharon Madden as Betsy and Larry Gelman as Elmo. The episode has some great touches. Betsy Cowland--the name Betsy is common for cows, like Spot for a dog, and Cowland is self-explanatory. Betsy is surrounded by plants that she talks to and clearly cares about, so she is immediately a great candidate for this weight-loss system. Even while watching the Romero-inspired Night of the Eating Dead, she is munching on a turkey drumstick, undeterred by the onscreen gore. Betsy works as a telemarketer for Special Editions Books, an unforgiving job that has non-customers speaking rudely and hanging up on her, surely doing little for Betsy's already beaten down self-esteem. The phone call she received from Weight-Away, distributor of Your Weight Is Over products, is genuinely creepy, mimicking Betsy's own telemarketing script, yet with Weight-Away the transaction is already made: "We'll deliver this afternoon," says the non-descript male voice. And of course there is the screaming enchiladas and tacos in a hilarious orgiastic feast that must be seen. There's a great deal more, and will encourage a view. 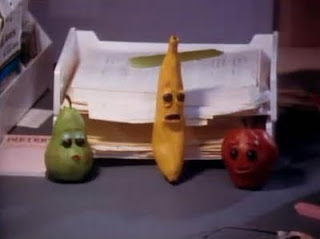 The finest aspect of the episode is that Elmo, the man Betsy is trying to impress, is a short, balding funny-looking guy who is already completely enamoured of her. His crush on Betsy is genuine, a torch he's been carrying a long time, yet Betsy's self-esteem is so beaten down by being overweight that she is unable to realise this, and hence the terribly tragedy. A tragendy greater than that, even, is poor, kind, unprejudiced Elmo's final loss of her, after so many years. Imagine what he must have gone through to finally gain the courage to even pursue Betsy. A tragedy for two, indeed.

"Scripts aren't written, they're re-written." This philosophy should have been applied to "The Deal." Desperate and ambitious screenwriter Tom Dash has been collecting rejection slips for his scripts, until friendly neighbour Donald passes one along to some people he knows, because really, it's not about the work but about who you know. Dash receives not only a contract, but a cheque for $20,000; "I'll be damned!" he cries. "Yes, you will be," says Donald. Turns out the friendly neighbour is the devil, and Dash sells his soul in order to be in charge. The episode is not too original, and not too funny, but Allen Garfield is fun to watch in three different roles. Robert Costanzo is also amusing as producer Vincent Dessari (I though at first it was Jon Polito, likely with the excellent Barton Fink in mind), and Bradley Whitford is fine as Tom Dash.

"Behold the great city has fallen, and has become the habitation of devils and the hold of every foul spirit, and a cage for every unclean and hateful bird of prey." Perhaps exaggerated, but a powerful way to describe the sacrilegious age of 1986. 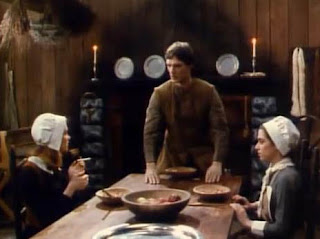 College Sophomore Sarah McBride accepts a job at a colonial village tourist trap, despite the particular demands of employer Thomas Branford. Well, it turns out that Branford is still living in colonial times, 1692 Salem, to be precise, and takes poor Sarah back in time with him. There Sarah meets meek Jane Branford, daughter of Thomas, and, not aware this she is nearly three years in the past, tries to get Jane to stand up to bully husband to be Peter. It doesn't take long for modern Sarah to stir the crucible and raise the ire of the men, so that Thomas, seeing her strike fire at her fingertips (with the help of drugstore lighter), accuses her of being a witch, and sentencing her to death. What will happen to our Sarah? And how will poor innocent Jane fare amid the tyranny of these colonial men? An entertaining episode indeed, and I love the idea that Salem witches were women from the mid-1980s. I don't really understand why Thomas was so intent on wanting to preserve the puritan past after having caught a glimpse of 1986--it wasn't that bad of a year.

Directed by a woman, written by another woman, the episode contains nice touches of basic feminism, old-time "romance" in a kind of historical Harlequin satire, in which the rugged farmer doesn't get the innocent virgin girl. It's a lot of fun to watch, and yet it's also about changing times and wanting to preserve the innocence of the past. I would have liked a little more detail about Sarah, as much that could have been added to the short episode, and I didn't believe for a second that Haviland Morris could be a college sophomore. Research indicates that she was almost thirty when the episode was filmed. Casting against age is often problematic (just look at Kenneth Branagh as Hamlet, and Derek Jacobi as (grand)stepfather Claudius!) Or perhaps Goody Sarah was a reel slowe lerner. Otherwise she suited the part, while Texan Wayne Tippit was great as crusty Thomas Branford.

Great read. Thanks for taking the time

I'm just pleased that my taking the time resulted in a "great read." Thank you.