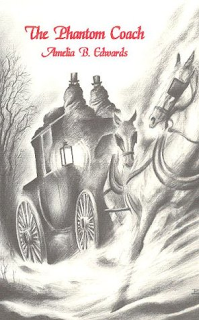 Amelia B. Edwards was among the writer acquaintances of Mr. Charles Dickens, and her short prose has appeared in both of Dickens's periodicals: Household Words and All the Year Round. While known primarily as a novelist and non-fiction author, this story is not Edwards's only supernatural tale, but it is her most popular. It was published in the annual Christmas volume of All the Year Round, and has been reprinted continuously since in various anthologies.
The story is narrated by the unnamed protagonist twenty years after the fact. Recently married and visiting the north of England with his wife, our young and confident man is caught out late on the English moors while hunting for grouse. It begins to snow and the temperature falls considerably, so that our narrator speculates on his demise. As luck would have it, he encounters a crotchety man and stubbornly follows him to his house, where our narrator meets an eccentric hermit. This hermit, appalled at the intrusion, grudgingly allows our narrator to stay the night, and eventually warms up to his surprise guest. After dinner he gives the young man a brief account of his life, impressing the narrator by expounding fluidly on numerous topics. He is a man of both science and philosophy, as he defines himself. Once a scientist in the city, he was ridiculed by colleagues for his belief in the supernatural, specifically in apparitions, and resentful of the closed-mindedness of his contemporaries, he decided to isolate himself from society. In this cabin he is able to dedicate himself to work. Our narrator learns of a late mail coach that is expected that night five miles from the house, and hurries to meet it. In so doing, he finds his own  strict rational beliefs challenged, and is essentially converted to the hermit's viewpoint on apparitions.
"The Phantom Coach" holds up well a century and half after its initial publication, yet simultaneously remains embedded in Victorian ghost story conventions (though it does stand out from other standard fare of the time). The narrator is presented as a rational man, confident and resourceful. Off the bat he informs his listener that he is revealing an experience he has shared with only one person, and adamantly states that it happened and that no one can convince him otherwise. He is presented as  trustworthy, and his vivid re-telling of the events of that afternoon imply clarity and sobriety.
The story is broken into three distinct sections: the introductory portion when our narrator finds himself lost, and during which we learn of his character; the second section when we meet the hermit and discover the main idea behind the story, that science and the supernatural can co-exist in our world, and are not mutually exclusive, and finally the third portion, when the narrator heads out on the old mail road and encounters the supernatural.
The narrator's encounter with the hermit is perhaps the most compelling portion of the story. It helps to back up the narrator's claim of ghosts in an ingenious way. Our nameless hermit makes it clear that his successful career was ruined because he was outspoken on his belief in apparitions; he essentially lost everything as a result of being open with his beliefs. We know the narrator is young, just married and prepared to make the best of his new life. Following his experience later that night, he heeds the hermit's cautionary tale and decides to save his future by keeping the experience a secret--he even admits to not having told his wife, not willing to damage his marriage to the woman he loves. As he states in the opening line: "The circumstances I am about to relate to you have truth to recommend them." From his point of view he is not being arrogant, but instead indicates that truth is not just his word, but also his motive, since sharing truth on such experiences is risky.
Interestingly, this is the premise to Dickens's Christmas ghost story "To Be Taken with a Grain of Salt," published in the following year's Christmas edition of All the Year Around. Dickens's narrator begins his tale with these words: "I have always noticed a prevalent want of courage, even among persons of superior intelligence and culture, as to imparting their own psychological experiences when those have been of a strange sort." It is likely Dickens, who edited the journal, was directly influenced by "The Phantom Coach."
Of the incident itself, I won't write much. It is expected, but nonetheless well presented. If we assume the tale is being narrated in 1864, then the events occurred in 1844. The incident, we learn from the crotchety old man, occurred nine years before, therefore if we were to keep up the timeline established above, the incident could have occurred in 1835.
For more of this week's Wednesday short stories, please visit Patti Abbott's blog.
Posted by Casual Debris at 3:16 PM