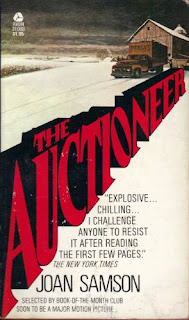 Well received critically and commercially upon its initial release, The Auctioneer has since fallen into semi-obscurity. This unfortunate fate is partly due to the author's death shortly after the novels's publication, and the absence of a second book. I understand that Joan Samson was working on a second novel when she sadly succumbed to cancer shortly before the age of forty. While some novels persist in part because they are the author's only published work, such as John Kennedy Toole's A Confederacy of Dunces (1980) and, most notably, Harper Lee's To Kill a Mockingbird (1960; for many years at least, prior to the publication of Go Set a Watchman in 2015), there was no mystique around this author, nor an attached Pulitzer, to help keep this first and only novel in the literary consciousness. Regardless, the novel is still respected by those who have read it, and its near-cult status will ensure that it will continue to be read.

The novel focuses primarily on a family living in the fictional rural town of Harlowe, New Hampshire, comprising of John Moore, his wife Miriam ("Mim"), their four year-old daughter Hildie, and "Ma," John's elderly mother. Having lived their entire lives in that community, amid the hardships of rural farming, Samson explores the affects of a charismatic auctioneer, a contrasting outsider, who moves into the community and progressively takes over. By holding regular auctions to raise funds for the benefit of the town, Perly Dunsmore is able to manipulate those funds and the people they are meant to serve. Professing the values of the "old ways" in a town built on tradition, Dunsmore is in fact quite modern and progressive, albeit amoral, in a business sense, as the reader discovers in the latter parts of the novel.

The Auctioneer blends many elements into its narrative. It acts as mystery, thriller, horror and even family drama. The scenes of basic survival, as the family members struggle to maintain their livelihood when they have been stripped of most of their belongings, is for me the most vivid. With family dynamics at the fore of the drama, Dunsmore appears seldom in the novel, which is to the story's benefit. Dunsmore unleashes the tensions, but most of the drama is located within the family and within the community, only highlighted and elevated by the presence of this daemon-like figure, who at the end proves all-too human. The real daemon is that aspect of humanity that can allow such usurpation, and it appears Dunsmore's downfall is a result of the members of the community finding themselves in the same building facing that man, as only then do individuals find the courage to fight back.

The ending comes across as a little too convenient, and reveals an odd flaw in Dunsmore's otherwise perceptive understanding of human nature. Yet the novel is not about the ending, and it does not detract from the challenges Samson has set for her characters. These characters are well delineated, strong despite the predicaments in which they find themselves, and it is this strength and drive for survival that renders the situation so bleak, since they are unable to oppose the auctioneer. In particular it is the women in the novel who are both driven enough to fight back, while being rational enough to hold back, as they must defend the family unit. The men are driven more by vengeance, or frozen by the apathy of frustration and hopelessness.

Though the novel enacts a specific period with well-defined characters, it can nonetheless act as allegory. The auctioneer himself is the state rendering its citizens dependent on its continued presence, replacing a mild form of government with a kind of modern, capitalist totalitarianism. The pretense of communal ownership is false, and glaringly fails as its members are robbed of what is essentially theirs.

Also prevalent is the threat of urban sprawl, as large cities, in this case Boston, are overgrowing and becoming stifling to humans who long to connect with the peace of a past, uncomplicated life. Or at least what is envisioned by the urban mass to be an idyllic return to nature, ignoring the hardships that Harlowe's inhabitants have been struggling with for generations. The idea of urban sprawl threatening these communities and this way of life is splattered throughout the novel, as we learn more of Dunsmore's ultimate plan, not just for Harlowe but for the surrounding communities as well.

However one would wish to interpret the novel, it is a powerful work that is deserving of a read, and a later re-read. The weight of these ideas packed into a suspenseful novel adds to the tragedy that Joan Samson was not given the opportunity for a follow-up. Regardless, we should be grateful she has left us with such a profound work.

Posted by Casual Debris at 9:52 PM

Valancourt, which has taken up the task that NYRB Press had begun and then some (of bringing back into print literate horror and fantasy fiction which has been neglected and putting it in editions marketed to the readers who usually try to ignore fantasy and horror packaged as such) has a new edition out now.