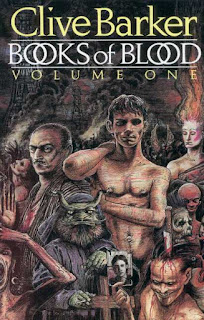 
This book not only introduced Clive Barker to the world, but also established his reputation in the realms of horror fiction--a feat for a first book publication. Stephen King's oft-quoted "the future of horror" blurb was in relation to this little book.

The first in a series of six Books of Blood, the volume includes two lightly humourous tales intermingling with three darker stories, and by far the more effective works are the ones abstaining from humour, which includes in its ranks the introductory framing piece that attempts to unite all these tales of blood.

Compared to most generic horror novels of the eighties and nineties, Barker's stories are infused with detail pertinent not only to plot but to the overarching ideas that propel the stories. The theatrical "Sex, Death and Starshine" is infused with references to Shakespeare, whereas the more complex "Pig Blood Blues" intertwines the identities of its characters with that of the detention centre in which it is set. Barker certainly placed effort in the literary aspects of the stories, and his work, at least here, is more effective than most mainstream stories that aim only to scare. The stories are accomplished and there is little surprise that he this book had an impact with professional writers of the genre. I own all six books and will certainly complete the series.


The Book of Blood     8/10
In this opening framing narrative, the dead have come to a crossroads where they can communicate with the living through the vessel of a young man. The young man, however, is a hoax, and the one with any communion with the dead is the woman scientist who believes so much in the boy.

As a framing narrative this one serves a dual purpose: it works very well also as a standalone piece. Most framing narratives come across as artificial attempts to bring disparate fictions together. Barker conceives a great concept and delivers a strong story with, despite its limited length, strong characters. The only issue with the framing narrative is that, with its grisly tone it seems to exclude the comedic stories, as they don't quite fit the mold of the book of blood as conceived in this introductory narrative. 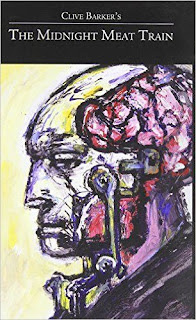 The Midnight Meat Train     7/10
Among the more recognizable of Barker's shorter works, this story deals with a series of disappearances in the New York City subway system. The narrative of an out-of-state and alienated office clerk, disillusioned with the dream of NYC, is contrasted with that of an aging killer. The narrative flows well and the build-up is appropriately handled. The story's gritty and dark urban landscape helps to drive this story that essentially portrays life as the cogs of a major urban centre. While the characters themselves are straightforward and familiar, the story is not about these people but more about the landscape and the place of the individual within a vast urban beast of a city.

A far superior telling than the flat movie version, which alters the characters in such a way that much of the point of the original story is swept away. The cover to the left is from the limited special edition, including additional material and colour paintings by Barker, released by Dark Regions Press in 2014.


The Yattering and Jack     5/10
Like its Tales from the Darkside rendering, I didn't care too much for this one. As a disclaimer I very rarely enjoy comedy as a horror subgenre, and this one is overstated and weak. After having been duped by a woman, the devil sends a minor demon to claim the soul of the woman's excessively passive son over the Christmas holidays. The daemon must act within a set of prescribed rules in order to achieve this end, a task he is pressured to accomplish by the scarier upper echelons of hell. This story might have been more effective with a grittier tone, and the idea that perhaps Jack was less passive and more of the devilish manipulator would thereby maintain a darker aspect. Unfortunately the lightness of the piece just makes me not care enough either way.


Pig Blood Blues     7/10
This lesser-known Barker story might, aside from the introductory segment, be my preferred piece of this collection. Former police officer Neil Redman begins his new job as an instructor at Tetherdowne, a juvenile detention centre. He has left the force to make a difference in running the centre's workshop, but quickly experiences alienation from both the uptight staff and the uninterested residents. As with "The Midnight Meat Train," our protagonist is the outsider who is consumed by his new environment.

The current problem at the centre is that the residents are treating a recent runaway by the name of Henessey as a kind of saviour, and believe he is now embodied by a large pig that lives at a nearby farm. The spirit of Henessey is also believed to be persecuting the mate he had initially escaped with. Their belief that this pig is a kind of incarnation of the runaway leads to a strange kind of worship, and determines behaviour at the centre. Moreover, the kid who had originally run off with Henessey, Lacey, is marked for sacrifice, and Redman seeks to save him.

Spoilers herein. The story is essentially a bit of psychological horror rather than supernatural, and is deftly handled. We discover that the awful smell emanating from the farm belongs to the rotting corpse of the runaway that is hanging inside the sty. This bit of reveal is essentially informing us that the pig is an ordinary, albeit a large, animal, and not the incarnation of a boy who escaped the centre by taking his own life. The worship of this pig is dangerously and disturbingly misplaced, and it appears that all hope laid onto this boy, who represents a form of escape for residents and the adult staff alike, is transferred over to the first available form. Neither residents nor staff of the centre have much hope of any kind for a proper future, and the worship of this over-sized, grotesque pig is all these people have to indicate that a life away from the desolation of Tetherdowne is a possibility. In fact, an appropriate dichotomic title would be Tetherhope.

Barker employs some interesting plays with wording. The most obvious is that a policeman is a "pig" while staff and residents are respecting a literal pig. The centre is called Tetherdowne, which of course means to tie an animal down using a restraint of some kind ("tether"). We are deliberately informed that the centre is a Remand Centre for Adolescent Offenders, whereas the former police officer's name is Redman, clearly a shuffle of "remand" as the "d" is nabbed from the back and plunked into the centre... Just as Redman is plunked in to the juvenile centre.


Sex, Death and Starshine     4/10
I first encountered this story in the John Joseph Adams 2008 anthology The Living Dead (Night Shade Books), and immediately did not enjoy it. The anthology itself, though it had some fine stories, was overall underwhelming, and I thought perhaps it was the overall disappointment in the anthology that marred the story for me. However, while I was more involved at the beginning with this re-read, my interest plummeted half-way through and did not recover.

In this zombie tale, former theatrical performers usurp a stage production of William Shakespeare's Twelfth Night, casting a once great, but now dead, stage star to counter the awfulness of the soap opera actress who was set to perform. Little happens in this predictable story, and though Barker infuses his text with references to the bard and his other works, it is not clever enough to make the reading enjoyable. My second reading of this piece will likely be my last, despite its appearance in a handful of zombie anthologies. 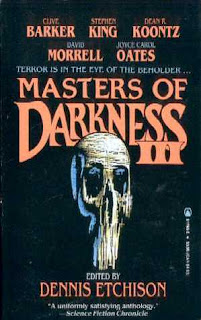 A couple driving through a neglected rural part of Eastern Europe encounter the product of an odd ritual: the inhabitants of two villages strap themselves together to form two anthropomorphic colossi. I first encountered this one in the enjoyable Dennis Etchison anthology Masters of Darkness III (Tor, 1991), part of a trilogy collecting stories selected by their authors, each choosing a personal favourite. I was impressed with Barker's piece then though many of the details of the story have been overshadowed by the mesmerizing colossus itself; I enjoyed revisiting those details in this re-read.

The strains of the relationship are countered by the physical strains these village inhabitants must undergo as part of this incredible ritual. The couple experiences a routine of fighting and sex, and fall of a colossus can be the reflection of the turmoil the men experience. The fact that the couple is a pair of men does not detract from the story at all, and to me appeared incidental, though I presume Barker had reasons for creating a homosexual couple for this piece, perhaps simply to mirror the make-appearing colossi.

An odd and highly original story that was later included, appropriately, in the Ann and Jeff VanderMeer anthology The New Weird (Tachyon, 2008), which I own but have not yet had the pleasure of reading.

Posted by Casual Debris at 5:07 PM