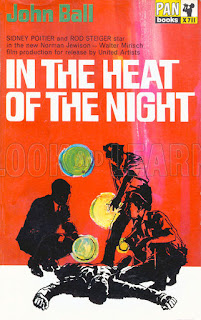 
In the Heat of the Night is best known in that it helped generate a remarkable and memorable film. It's been years since I've seen the film, and having now read the novel I am inspired to re-watch it, but not before writing this review since I want to focus only on the book. Incidentally, the novel received the 1966 Edgar Award for Best First Novel, whereas the film received the Academy Award for Best Movie.

The small South Carolina town of Wells is faced with handling the murder of white Italian musician Maestro Mantoli, who was instrumental (pun intended) in organizing a large-scale music festival in the hopes of generating a tourist economy for the suffering region. The conductor's body is discover by deputy Sam Wood in the middle of the night, and in search of suspicious characters he picks up a well-dressed black man at a train station, who turns out to be Pasadena violent crimes investigator Virgil Tibbs. Tibbs is brought in on the case as a potential fall-guy so that the city council can save face over such a high profile investigation, should anything go wrong. Essentially, blame the unsolved crime on the incompetent black guy. Tibbs, however, proves to be highly intelligent and an excellent investigator.

Racial discrimination is certainly a major focus, as Tibbs, in the few days he spends on the investigation, faces various forms of racism. Some are extreme and stem from plain ignorance, while more complex forms of racism are explored via Sam Wood, a relatively positive character. Unlike the other inhabitants of Wells, with the exception of the northern and progressive Italians, Wood recognizes and quickly admires not only Tibbs's intelligence and training, but also his respectful demeanor. Throughout the investigation, the emotional and at times hard-headed Wood finds that his views on race are being challenged, that he has been conditioned to view certain people, black or Italian, through the society in which he was raised, rather by reason, and finds himself by the end of the novel not only admiring Tibbs, but in love with an Italian woman.

Another focus is an interesting situation with the Wells head of police, Chief Gillespie. It is made clear that Gillespie is incompetent and has been hired because of his inexperience. The town council can in this way control the police force and pressure the chief to do their bidding, since his post is not too secure, and since he does not have the respect of the rest of the force. Plot-wise this allows Tibbs to handle the investigation as he sees fit, since Gillespie's involvement becomes minimal. An intelligent and conscientious officer would have taken on the investigation rather than be impressed by an outsider, black or white.The adverse effect of this element, however, is unfortunate. As intelligently as Tibbs is presented, the fact that the law enforcement of Wells, particularly its chief, is less than average, undermines Tibbs's own efforts. Simply put, Tibbs would be truly extraodinary had he managed to solve a murder that baffled a competent police force. 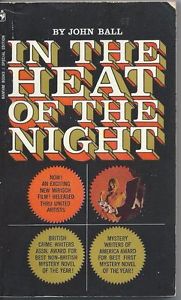 The novel is written through a problematic point of view. The third person is limited to three characters for the most part, Tibbs, Gillespie and Wood, with minor awkward interference from others. Most of the point of view rests with the white men, however, so that Tibbs, the character we should be following, is relegated to the role of outsider. Since he is the outsider in the town, it is as though the readers should be identifying themselves with the racist locals rather than the progressive Californian. Of course Ball was focusing not only on a standard who-dun-it plot, so that point of view had to be stretched out. Wood's point of view in particular is required in illustrating how ridiculous it is to judge a person by their skin colour, and his coming to terms with his own prejudice is important to the novel and the genre. Moreover, by relegating Tibbs's investigation to second-tier focus, Ball is able to withhold evidence that Tibbs uncovers early on, and springing it at the reader at specific points in the text. On one end this gives the novel an artificial feel, while on another it increases drama and allows the mystery to maintain its weight against the book's important and inherent social commentary.

Though the investigation itself is quite interesting, the resolution is a little anti-climactic. Not because it is predictable (that it certainly isn't), but because it is so unremarkable. I was piecing together a council conspiracy which, admittedly, would have been an obvious suspect.

The love story sub-plot is unbelievable and poorly delivered. Aside from allowing Wood to fall in love with an Italian, it serves little purpose. Moreover, though author Ball does well in presenting non-white characters, he unfortunately fails in delivering positive, or even realistic female characters.

Interestingly, the N-word is used quite liberally in the novel, yet only in full by the less than likable councilmen, including the mayor, Gillespie's boss. Other, more positive characters, have the word on the tips of their tongues, such as deputy Sam Morton, who occasionally mutter the word's first syllable, as Ball, wanting these characters to be likable despite their views on race, prevents them from saying the despised word while still portraying them as locals of a deep-rooted racist community.

Email ThisBlogThis!Share to TwitterShare to FacebookShare to Pinterest
Casual Labels: Ball John, In the Heat of the Night