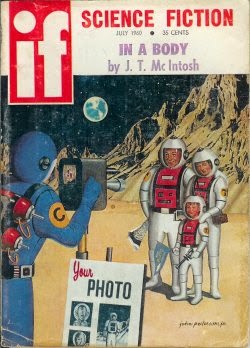 
"It is perhaps a pity that nothing is known of Andrew Benson's parents."

The publication of The Baen Big Book of Monsters a few months back, a new anthology featuring reprints along with a couple of new stories (including one from editor Hank Davis), brought Robert Bloch's highly entertaining short story "Talent" back into print after a quarter century absence from the anthology scene. (The Mammoth anthologies had covered the monster genre with its 2007 anthology The Mammoth Book of Monsters, though it contained more original pieces and ignored Bloch entirely, while only digging as far back as 1973 for its reprints.) This is the second time the short story has appeared in a monster-themed anthology, having been included in the Bill Pronzini and Barry N. Malzberg edited work Bug-Eyed Monsters from 1979.

Yet the story can easily be included in a number of different theme-related groups, such as genre comedy, sci-fi/horror, movies, orphans, psychopaths and oddball characters (which it has been). among its many strengths, "Talent" encompasses a variety of aspects of genre fiction, including its approach.

The story deals with orphan Andrew Benson, a reclusive boy who awakens from a perpetual daze only when he performs mimicry. He is in fact so good at mimicry that people watching him perform are convinced he even looks exactly like the individual he is aping. When Benson discovers Hollywood movies, his penchant for imitation proves boundless. aside from his mimicry and dramatics, Benson has absolutely no interest in any other aspect of life, and his motivation becomes the story's final, surprising reveal.

"Talent" is structured like an informal investigative report. A hack journalism tries to piece together the life of Andrew Benson through little information and lot of hearsay, clipping together portions of interviews and the few facts surrounding Benson's life. Such a structure creates a specific character in the narrator: an unimaginative and strikingly unaware investigative reporter; an oxymoron in itself. This character is necessary to help build up to the ending otherwise the piece would would begin with the final line. The technique also allows Bloch to employ his gift of ironic storytelling.

Bloch's irony is present throughout the text, and his playfulness shines through the irony as he touches upon the various deaths surrounding Benson, all linked to some recent movie or movie trend ("you've probably seen something just like it in the movies a dozen times"). Centering his humour around the irony is what makes "Talent" such an enjoyable read. Bloch is charming, playful and very aware of the genre in which he is working.

Of course this brings us to the overwhelming fault in the story, which is unavoidable in Bloch's approach. (I will not spoil the story and hence risk being vague with this point.) The narrator is blindly unaware of Benson's nature to the point that it doesn't even cross his mind to speculate on connections between Benson and the deaths surrounding him which are more than obvious to the reader. In fact, the narrator rejects the theories brought up by one of the victims even though he is fully aware of Benson's eventual transformation. In fact, it is that transformation that leads the narrator to attempt to piece the details, fact and hearsay, of Benson's life into some king of chronological biography. THat opening line (quoted above) taken into consideration along with the various theories of Benson's identity that are discussed is alone indicative, related to the ending, that those theories should not be so carelessly rejected.

Of course the story is meant for pure entertainment, so the flaw is forgivable and in no way detracts from the story itself. Like much of Bloch's short work, it's worth a read.

On a side note, there is a reference to Jack the Ripper as related to a murder in conjunction with the Ripper-related film Man in the Attic. Bloch was interested in various serial killers and wrote several pieces dealing with the nineteenth century murderer, including "Your Truly, Jack the Ripper" (1943), "A Most Unusual Murder" (1976), and the Star Trek script "Wolf in the Fold" (1967). Bloch's association with the killer is so evident that any mention of the Ripper is welcome.

I'm a big fan of Robert Bloch. I'm going to have to read "Talent" this weekend. I have Hank Davis' latest BAEN anthology, AS TIME GOES BY.

Any fan of Bloch is welcome! I'd love to know what you think of "Talent" (& hope you have a copy).

Davis seems to be the current resident reprint anthologist at Baen. He's got another coming out this fall, Future Wars & Other Punchlines. As Time Goes By features only one new story & the selection is quite varied. I should get my hands on a copy (even though Bloch is absent from the table of contents).