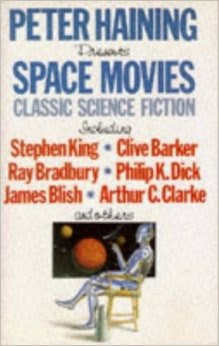 Of the two titles the anthology has appeared under, Space Movies is by far the most appropriate. Haining's focus in both the selections and the introductory material is on film, more specifically on special effects, and not on the related literature. While the anthology collects a few short stories that have been adapted to the big screen, it also contains some "fictionalizations" of scripts for both film and television, as well as a script treatment. There is an introduction by Haining, "The Fiction of Possibilities," that discusses the early evolution of special effects, and each story has its own mini intro, focusing primarily on the film the selection is highlighting. The introductions are interesting though not revolutionary.

Unfortunately what the book gains in its unconventional material and interest it loses in overall sloppyness. There are far too many typos throughout the book, including character names (Parkette in "The Lawnmower Man" is at one point Parkett, whereas Bierce in "The Unreal McCoy" is also Beirce).

Three of the stories here are re-reads for me and all three hold up well: Clark's "The Sentinel," Dick's "We Can Remember it for You Wholesale" and King's "The Lawnmower Man." My favourite new reads are Barker's "The Forgotten" and Moore's "The Lot," and along with Dick these make up my preferred three stories in an interesting though far from fully achieved anthology.

Like many famous science fiction films, the book had a sequel, as Space Movies was followed a year later by Space Movies II. The two anthologies were combined by Carroll & Graf in 1999 under the title Vintage Science Fiction.

This extract from Heinlein's novel does not stand on its own. The older leader appears unnecessarily bitter toward his youthful comrades, though I haven't read the novel and am taking it in context of what I am being given. The 1940s vision of the moon is laughable, but more amusing than irritating. The movie Destination Moon was a big achievement for its time and a cinematic event, and that and the use of Heinlein's name are likely the main reasons the excerpt was selected for inclusion in the anthology. The film, incidentally, was only co-scripted by Heinlein, along with Alford Van Ronkel and James O'Hanlon.


The Meteor by Ray Bradbury     5/10
It Came from Outer Space directed by Jack Arnold, Produced by William Alland

According to Haining, this piece is a treatment of the script by Ray Bradbury, but it reads like a straightforward novelization (or story-ization) of the movie, perhaps for this anthology, perhaps even ghosted by some unknown (Haining?). While I enjoyed the movie, this treatment does not read well; it is dry and completely removed from any of the film's spirit. It is a serviceable play-by-play, with less independent inventiveness than the James Blish adaptation of Star Trek's "The Real McCoy," which will be discussed later.

Like Sir (or Saint) Thomas More's Utopia, Braun's work is a pretend story that is merely framing views on a utopia-like society. Though the narrative begins with a fair amount of suspense, all elements of tension are removed early. Story-line is replaced by a primarily descriptive narrative of an advanced society that has lost its sense of adventure and need for exploration, presented as an antithesis to the youthful human race, whose desire for exploration is venturing into the new, exciting (and possible) realm of space travel. The Mars of 1955 is replete with life, technology and scientific intelligence, though despite Braun's attempt at thoroughness in depicting this society in such a brief space, the reader is left to wonder about a few things, such as where they get their materials for all that infrastructure, or even for their clothing. I am not familiar with the film, but this print version is, with its lack of story, nonetheless interesting. 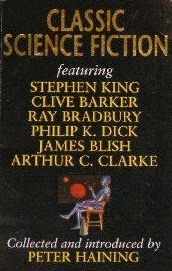 Lot by Ward Moore     7/10
First published in the Magazine of Fantasy and Science Fiction, May 1953
Panic in the Year Zero! (1962) directed by Ray Milland, produced by Arnold Houghland and Lou Rusoff

I am not familiar with the movie, directed by actor Ray Milland who I quite like (that performance is Dial M for Murder truly elevates the film), and Haining's comments on Milland's drive to deliver a dark apocalyptic film for the early 1950s has certainly peaked my interest. Moore's short story is very effective. Well written with fine characterization and diologue, the entire piece takes place at the very beginning of a family's departure from home during a post-apocalyptic crisis, and though we don't travel too far (though we really want to), the entire future plight of that family--and humanity--is so expertly suggested by the appropriate twist at the end (or the beginning). Definitely worth a second read.

Clarke's short story "The Sentinel" is best remembered as the originator of Kubrik's far more famous film. Yet the short story, first published seventeen years before the movie's first screening, was decently anthologized prior to being immortalized, so it would likely not have remained unforgotten in the new millennium. The story re-appeared in the popular British science fiction anthology series edited by Kingsley Amis & Robert Conquest, Spectrum III (Gollancz), as well as Damon Knight's future-themed anthology Worlds to Come (Harper & Row, 1967). Originally published by major science fiction editor Donald A. Wollheim in Story Fantasy 10 (Spring 1951), it was reprinted in the influential magazine New Worlds Science Fiction 22 (April 1954, edited by John Carnell), and in three of Clarke's own collections: Expedition to Earth (Ballantine Books, 1953), Across the Sea of Stars (Harcourt, Brace & Company, 1959) and The Nine Billion Names of God (Harcourt, Brace & World 1967). (For as complete a bibliography as is available, visit the story's ISFdb page.)

"The Sentinel" works better as an idea than a short story--it is a concept disguised as a story, with a pretend plot and character that culminate in Clarke's speculating of an advanced alien race waiting centuries for humans to evolve enough to be worthy of contact. The aliens planted a machine in a hard-to-find place on the moon as a kind of test, is absolutely fascinating, and Clarke furthers his speculation by wondering how lonely such advanced space-travelling beings must feel in the vastness of space where intelligence is a bona fide rarity.

And of course there's that incredible film.

I skipped this extract of Logan's World, partly because I often skip extracts, and partly because I didn't much care for the novel Logan's Run (1967) by William F. Nolan and frequent Twilight Zone contributor George Clayton Johnson, though I did enjoy the somewhat silly movie. Logan's World was published a year after the movie's release, and possibly written in a rush at the success of the film. There was a third book in 1980, Logan's Search, which quickly fell out of print.

Note that Logan's Run co-author George Clayton Johnson also wrote "The Man-Trap," the first aired episode of Star Trek, which was later adapted by James Blish as "The Unreal McCoy," and included as the following story in this anthology.

This is Blish's novelization of the first aired Star Trek episode "The Man Trap," tele-scripted by George Clayton Johnson. Blish was novelizing the original Star Trek series from 1967 until his death in 1975, and produced twelve volumes for Bantam. This rendition is fun and nostalgic to read, and unlike the other adaptations in the anthology, its author takes small liberties in adding to the story-line, such as internal character responses and interpretations of emotion.


We Can Remember it for You Wholesale by Philip K. Dick     8/10
First published in  the Magazine of Fantasy and Science Fiction, April 1966
Total Recall directed by Paul Verhoeven, produced by Ronald Shusett and Buzz Feitshans (1990)

Dick's story of a man's desire to visit Mars to the point of having memory implants installed in his brain holds up well nearing its half-century anniversary, and also as a re-read. The blatant coincidences are so absurdist that they are hilarious, and if you stop to think about, quite revealing on a more serious level. For one thing, humanity is eventually doomed for there is only so long you can keep a man from dying, a man whose actual life is preventing Earth's destruction. Dick's ongoing interest in the idea that one's life is not the life they have in reality lead does not grow tiresome, particularly in the vast and varied ways it can be approached.


"The Lawnmower Man" is zany and fun, and I still recall the first time I read it as a pre-teen, struck by its originality (as I was with much of Night Shift). The story holds up and remains fun, the character details are good in the depiction of Parkette, though the devil references are not necessary, and without them the story might even work better. Comical devil references are reminiscent in the work of earlier twentieth century genre writers like John Collier (best known for "The Chaser"), and like those lighter stories the potential dark overtones are wholly removed. Without explanation, the lawnmower bloke might have been just a little more sinister.

King makes an unfortunate oversight in the story. Parkette tells the lawnmower dude that the mowing should be quick and straightforward since the backyard has no obstructions, yet we later learn there's a birdbath in the centre of the yard. Was the grass so high it kept it hidden?

It's amusing that the anthology ties the movie to the short story since Stephen King successfully sued to have his name removed from the credits of a movie that was clearly trying to cash in on his name at the height of his career. Even without the lawsuit it is evident that the connection is fabricated; a wonder King didn't sue Haining and Severn House to boot.

A white photographer visits the slums to capture the unusual array of graffiti covering much of the foreground, and soon becomes enthralled by both landscape and the gossip of killings that, despite their severe and violent nature, have been completely ignored by media. She investigates, and as you can imagine enters not only the foreign neighbourhood of the slums, but the surreal landscape of Barker's darker notions. Very well written, it is both social commentary and mild satire, featuring dis-likeable characters, good dialogue and a strong setting. I am not familiar with the movie that displaces the story from the UK to the US, which is not necessarily an issue since sadly such a story could be effectively told through much of the western world.

Posted by Casual Debris at 7:32 AM

Well, as you know, treatments are simply broken-out prose presentations of what a script is supposed to be about. I can see a RB treatment being of more historical than esthetic interest...nice breakdown!

Haining describes the selection as being based on Bradbury's treatment, so the historical document is reconstructed into something a little more legible than what a treatment can often be (I understand his treatment was a lengthy manuscript). I suspect the version here is not RB's own first-hand work, & likely ghosted for this anthology. Unless the story is RB's pre-treatment overview or descriptor.