[NOTE. This blog entry was flagged for its content, specifically for containing malware. I believe it was the link to the Bête Noire website which appears to have been corrupted. I have removed the links and hopefully all is now well. January 2023] 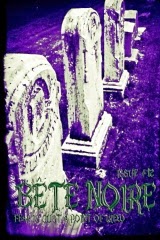 Small press magazine Bête Noire features diverse artforms to showcase different genres, though its primary focus is on horror, as implied by its tagline: "Fear is just a point of view." A short magazine and an annual anthology are offered at a low subscription price, and though works are not of the highest quality, they feature good ideas and are for the most part well enough edited.

As usual I am reviewing only the prose. The seven stories are quite short, including one flash piece. The good ideas are unfortunately not brought to their pinnacle of exploration, and tend to the generic in plot and character, which is unfortunate. My favourite pieces were the first two: Rhonda Parrish's "Feederes" and Enna Limb's "Plague Radio."

There is artwork in the form of "Face the Demons" by R.J. Smuin, which I do not care for, and a photograph titled "Walk Through Skeletal Trees" by Elanore Lennor Bennett, which is passable. The poetry features in issue 12 is made up of "Rough" by Florence Grey, "Death in Summer" by Marge Simon, "Down at the Bottom of the Garden" by J.S. Watts, "Living on the Leys" by Bruce Boston, "The Invasion" by John Grey (which I thought pretty neat) and "Sunset Sonnet" by Amberle L. Husbands.


Feeders by Rhonda Parrish     6/10
A zombie apocalypse as seen through the point of view of an unusually smart cat. A short piece that plays nicely on the notion of "feeders," the term the cat places on his/her owners. An appropriate term since all the members of this new zombie-plagued society are made up of feeders. Cats search new creatures to feed them since their human masters have abandoned them, zombies feed on humans, and human survivors, with few resources, look upon cats and other animals as a source of food. The ending brings everything full circle, and this new society has abandoned all forms of culture and is maintained only by feeders.


Plague Radio by Enna Limb     6/10
Camille purchases a radio at a garage sale, something she refers oddly (and even incorrectly) as a "postmodern" radio, and soon discovers that the instrument broadcasts what appears to be an alien conversation. Inexplicably she is able to translate a few words, and discovers that the conversation has something to do with a human plague. The buzzing voices ring in her head so that she appears infected by both sound and meaning. A loose-ended story, it is suspenseful for the most part, though I would have liked, if not complete resolution, at least a narrower scope of possibility. The story can be interpreted as aliens are infecting humans via electronic one-way communication devices, driving them mad one by one, to Camille being insane and simply hallucinating the impending disaster.


Overtaken by Rish Outfield     5/10
New to the neighbourhood, a young couple learn that the town of Traysi, Arizona, has a unique feature: on every October 13th random community members are taken over by some inexplicable entity, possibly extraterrestrial. Coincidentally and conveniently they discover this odd truth on that particular date, and immediately learn what being taken over means. Somewhat reminiscent in idea only of Robert Silverberg's Nebula-winning and Hugo short-listed short story "Passengers" (Orbit 4, 1968), though not as complex (nor as good)--the beings are even referred to, at one point, as "passengers." Interesting enough, but the plot structure is generic.


Morrigan by Suanne Schafer    5/10
First person narrative told through the point of view of a dead horse, he is the most poetically inclined narrator in the zine. He tells of his continuous rise from sleep as his master searches for a victim. I figured out the ending early on since I was somehow reminded of a famous classic animation. I won't reveal more.


Patterns by Michael Lizarraga     3/10
Latino sexaholic security guard sees figures, mostly faces, in random patterns on tables, walls and such. Worse yet, these figures seem to be speaking to him. Moreover, he's heartbroken after a two-month relationship. There is a lot I did not like about this story. First of all I cannot sympathize or in any way care for a narrator who rapes as part of his need for sex, an experience that leaves him feeling good (and yet inexplicably attends sexaholics anonymous), is temperamental and an obsessive stalker, nor has any other redeeming quality. I cannot buy into his exaggerated grief after a two-month relationship, particularly when the only reason for the grief appears to be that he is Latino and Latinos are emotional people. Finally, it is unclear why he wants to kill his ex-lover. Or I just missed it, having rushed through the latter half. Even the proofreaders and/or editors seemed to rush through it, since there are so many elementary grammatical errors that slipped onto the printed paper. While there are a number of errors throughout the magazine, this story is particularly victimized. "In his lap laid a medium-sized notebook," (47) "...seeing nothing accept the dining table...," (53) and the double-whammy: "Nothing else was outside, accept cricket`s chirps." (53) There are also missing articles and much awkwardness.


Nightmare in Black by Robert Laughlin     5/10
Flash about a mis-heard middle of the night phone conversation. With such an untrustworthy half-asleep narrator, I wonder what part was fiction, a dream fragment, or even if there was an actual phone call.


Separate Ways by Daniel C. Smith     3/10
More thought and about half the text went into the back-story about separated (formerly united) states. In this new backdrop is a man wanting to hop state lines to see his ex wife, and his dad who is around for expository conversation, and for son to say things along the lines of, "How do you do that dad?" when father makes a poignant and obvious point. This story about a country and a man named Ray reminded me of the Pearls Before Swine cartoon from 2007 I've taken the liberty to include here. 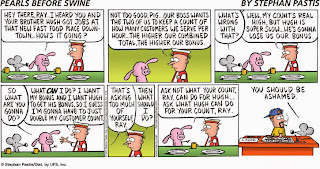