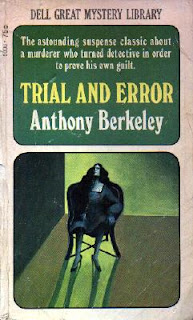 Its excellent premise is what attracted me to Anthony Berkeley's original, innovative and highly entertaining Trial and Error. Mild-mannered Lawrence Butterfield Todhunter learns that due to an aggressive aneurism he doesn't have much time left on this earth. Wanting to commit a great, humanitarian act before he goes, he throws a dinner party and tosses out a hypothetical, which leads nearly everyone to declare that great can be achieved through murder, so long as the victim is deserving of death. Hence Todhunter decides that before his impending doom he must seek out an appropriate victim and commit this terrible act.

Anthony Berkeley's novel has been out of print for some time, since the late 1960s it appears, with the exception of a small print run in 2001 by House of Stratus. This is a terrible shame because Trial and Error is an excellent read, a unique mystery that reads almost like an epic novel as it spans various significant episodes, each one a small book on its own, from Todhunter's seeking the perfect victim to the murder itself and its eventual trial. The book is split into five parts, each part dealing with a substantial leg in Todhunter's journey. There are a number of twists and I won't reveal anything more about the central plot.

The novel also boasts great characters, dialogue and attention to detail that is simply riveting. The world Berkeley manages to create is very real, and the geography of the various UK locations are clear; we always know where we are and where the settings lie in relation to one another. Moreover, the novel is filled with a good deal of humour despite its premise and its incessant focus on death. Yet what elevates Trial and Error from a good British mystery to a great novel is its notions of absurdity. Throughout the novel is a pervasive sense that despite the high dramatic aspects of life, both selfish and altruistic actions are governed by nothing more than chance; no matter how we strive for control the idea that we can influence destiny, our own or someone else's, is ridiculous. It is clear that the universe has its plans and the minutest element can thrust and thwart our plans in any seemingly random direction. And in the final scene even these ideas are challenged, as Berkeley twists the entire story into something altogether different. 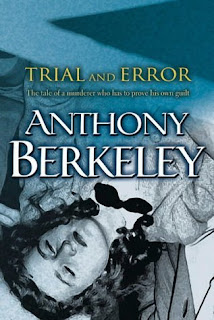 Trial and Error is additionally a success due to its innocuous protagonist. Lawrence Todhunter is barely a character, a simple man with simple ideas, impressionable and easily influenced, harmless in every dimension of his being. While it initially appears that such a character would undoubtedly fail in maintaining interest in any kind of novel, Todhunter succeeds in growing on the reader, not necessarily through his altruism, but through his determination and particularly because he does indeed transform. Not static at all, this Todhunter. Berkeley also risks creating an over-sentimental character, particularly as he is nearing death, and yet does a wonderful job in being direct with his story and avoiding overblown sentimentality.

The novel's only weak point is at the early stage of the trial, when Berkeley feels the need to restate details which the reader is already familiar with. This portion of the work suffers a little in its pacing, but once the cross-examination begins, the writing, particularly the dialogue, is so riveting that we nearly forget the slow progress of the previous thirty or so pages.

Anthony Berkeley's Trial and Error is a rare find that is absolutely worth seeking out.

Posted by Casual Debris at 9:18 PM

Great post - I hadn't realised that this book had gone out of print, though now that I think about tit I think my edition is probably a good 20 to 25 years old ... You've really made me want to dig it out again - let's hope I can find it!

Thanks Sergio. If you do find your copy please pass on the edition details; I'll add them to the short biblio list.