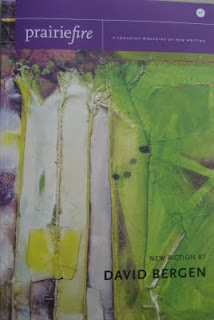 Over the past couple of years my standard response to most literary journals is that while the overall quality of the writing is quite good, only two stories (commonly the first two) are really worth reading. The problem is not only in the stories themselves, but in that there is usually a tiring sameness to the stories collected in any given journal, so that a story that might be more appealing amid a wider ranging collection, can never gain any form of autonomy amid its kin. Imagine painting a blue tree on a blue wall: the shades might be different but the overall effect is not terribly distinct. This particular issue of Prairie Fire is an exception to the trend, and while the first two stories were clearly the strongest of the bunch, others proved more enjoyable than I'd anticipated.

There are similarities between some of the stories: two feature decapitations, two have young narrators, two have doctors, two have chickens... Truth be told there is more diversity in content than is usual, and this was refreshing. I have many partially-completed journals, both literary & genre, lying about my study & bedroom, so that completing any one feels like a rare accomplishment. Sure there were the standard thematic elements, but the idea is to produce common ideas (for what ideas are truly original?) in less than common form of expression, whether an interesting story-line, creative structure, good humour or interesting characters. This issue was a breeze to read; there was only one story I didn't care for and couldn't finish in a single sitting.

As with many of these journals, the binding and cover are quite attractive and these slim books look quite attractive on a bookshelf. I felt terrible when I knocked some water onto my desk which led to the crinkling of a few back pages; I normally take such good care of my books (all my things, really) that it almost hurts to feel the wrinkled pages between my fingers.

As per usual I will review the fiction only, though I will make mention of a poem I quite enjoyed: "This Poem Permanently Removes Hunger" by Jesse Patrick Ferguson.

"Søren and Regine" by David Bergen. As a teenager I was awed by Søren Kierkegaard's 1843 work Either/Or, and from his work I became curious about the man. David Bergen paints a vivid portrait of Kierkegaard in light of his love for Regine Olsen. Tremendously absorbing in all respects, the narrative itself is vivid and smooth, yet what works particularly well is the interwoven notion that Kierkegaard believed you can accurately speculate about a person's inner state by examining their exterior appearance, and climaxing the piece with a brief description of a portrait of Regine and a photograph of Søren which essentially debunk the philosopher's idea. Here Kierkegaard appears at once charming and destructively obsessive, and the portrait is apt. This is my first work by Manitoba author Bergen, whose 2005 novel The Time in Between was shortlisted for the prestigious IMPAC Dublin Literary Award. 8/10

"Mazing Grace" by Michael Van Rooy. "Dad robbed banks." As implied by this opening line and the unusual title, "Mazing Grace" is a fun read. It's the story of a teenager's impressions of his father, old family tensions and the solid framework of a family that leads to a small sacrifice in order to gain something of utmost importance. A short piece with good, brief sequencing and a well-rounded storyline. Michael Van Rooy received the 2008 John Hircsh Award for most promising Manitoba writer, and also serves on the Prairie Fire Board of Directors. 7/10

"Locusts and Honey" by Billie Livingston. A young woman tells of the decline of her less than stable uncle. The repetition of their similarities can reveal much about the narrator, evoke a kind of threat, but doesn't really. Ultimately the story has less and less to do with the narrator, a direct result of the plot taking over from character three quarters of the way through, and assaulting the reader with plenty of hard-edged scenes. Overall well written, but it fell apart for me after the mid-way point. 6/10

"The Persistence" by D.W. Wilson. A man returns to his home town and finds construction work with an old friend who was once his employee. He is still getting over his divorce to a painter who has recently remarried. Well written but too long and too dull. 4/10

"Lake Vostok" by Mary Thaler. Judy arrives at Lake Vostok in Antarctica to supervise some deep ice drilling, but really she is there in search of an old friend who has disappeared. Thaler's bio claims she is at Université Laval, "where she studies the biology of microscopic plankton in the Arctic Ocean." I liked the fluid writing and the science, but didn't care for the characters. In fact, I was surprised the scientists in the story are such good writers, at least the missing one who had left all those notes and recordings behind; the scientific dissertations at Laval U must be among the most poetic. 6/10

"Alice" by Lucie Moeller. In the bed of a city hospital lies Alice, a young heroin addict. Alice is being treated by young Dr. Henry Nolan, who at some point will have his notion of the Hippocratic oath challenged. This story kind of snuck up on me. The first two pages were agony, and my brain was heatedly crying out, "Why do I read these damn things!" The characters were flat and I just couldn't fall into the trite mesh of sympathy the story was begging for. Feel for me! it called, Feel for US! And before I knew it my interested was triggered, and then, of all things, I was enjoying the story, until finally I was caught blatantly sympathizing. Damn it! I was tricked; even that final sentence pricked some fibre in my heart muscles. Nicely done, Ms. Moeller. I applaud your work. But did you have to name her Alice? Alice's Adventures Through the Looking Glass and Alice in Wonderland, along with Jefferson Starship and Go Ask Alice. I get it! I might have sympathized a tad more if her name were, say, Bella. Or even Lucie. 6/10

"Just Pretending" by Lisa Wilson. A tragic coming-of-age story alternating between two scenarios: the seven year-old farm girl who witnesses the red rooster's head being lopped off, and the fourteen year-old girl who strikes up a romantic relationship with Joe Jackson, the university student she meets online. Overall a good story, though I didn't feel that all its separate components were properly melded together, that the notion of pretense was more a side-bar than an integrated thematic point, and the fact that the title is linked to a theme rather than a more concrete story component only strengthens this impression. The tone seems at times to shift, and I can't figure the age of the narrator and how distant she is from the experiences she is relating. Aside from these points the writing is smooth, the characters well realised and the story generally well written with some nice touches of humour. 6/10

"Shelterbelt" by Amber Hayward. A boy runs along along the shelterbelt beside the family farm, instances of his short life flashing by him in second person. A believable boy written by a woman (or a man named Amber) in familiar situations, everything from lacking friends, moving house, sibling relationships and first kisses. Despite the familiarity I enjoyed this short bit of fiction (not quite a story); it is well written and I found myself capturing each detail clearly in my mind's eye. This ability, of course, is not of my keen sense of visualization, but rather of the author's ability to detail scenes so that they become vivid in and of themselves. Moreover, I love that word "shelterbelt" and think I'll order a shot of it at the bar tonight. 7/10

[I must admit I did not care for the killing of the kittens, and the fact that they were decapitated struck me as odd. So odd I tried to picture it, and seeing the fluffy things stretched out on the chopping block was too much for me. And then I wondered why we have back-to-back animal decapitation stories, which of course reminded me of Horacio Quiroga and "The Decapitated Chicken," and from there my thoughts just deteriorated.]

"Bush Country" by Niall Fink. [Spoiler: No heads are lopped off in the course of this story.] Two Alberta field pipeline workers drive deep into desolation seeking a possible goldmine. At one point Mack wields a chainsaw and I thought for an instant that his partner's head would roll along the ice. My imagination wasn't deterred by the fact that the partner is the narrator telling the story after the fact. Though no heads roll some characters do, in a sense, lose their heads, and rather than a wealth of treasure, Mack finds little more than a reflection of himself. While the story wasn't bad and I found the setting both intriguing and well realised, I wanted something more than what I would expect from a story of this kind, and it offered nothing beyond my expectations. 6/10

Posted by Casual Debris at 7:19 PM