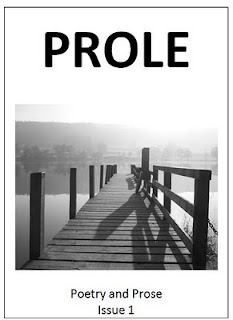 
I can't recall how I first came across Prole, but I noticed it just after the publication of its inaugural issue. Wishing to support I quickly purchased it, and watched it sitting languidly on my shelf until last week when I nabbed it, startling it from its bookish reveries, and quickly devoured the first story.

Prole is based in the UK, with an address in Abergele, which is in Northern Wales and not too far south from Liverpool. I know nothing about the publication nor about the editors who seem to prefer the shadows over the limelight, but I like their writers' guidelines, the attitude displayed, and the very attractive issues they have thus far produced (we are up to issue three now, so I'm being a little dated here, but I suppose that has become my trend).

The stories in the first issue are nicely varied and include both originals with some recent reprints. The first half is much stronger than the latter, and while I am pleased the editors have brought "Flower as Big as the Sky" to a wider audience, I am surprised with their choice to reprint "Stone and Wind."

"Shoes" by Dave Barrett. A busboy tells the story of El Sombrero regular drinker Gus Meyerson and his foot fetish. When Gus comes into some money (loads of it, the other patrons suspect) he begins to purchase shoes for Sombrero's staff members. This is a story not about greed but about what we see in those around us, or more specifically, what we choose to see. In the eyes of his entourage Gus never becomes more than a pathetic old man with a fetish and an inheritance, telling more about the viewer than the viewed. 6/10

"Flower as Big as the Sky" by Matt Dennison. (Previously published in GUD, issue 3, Autumn 2008) A boy and his parents wonder what Mr. Jones next door is building in his backyard. Why he dug that hole and what that odd contraption is that he's erecting beside it. A truly wonderful story about the magic of youth, the power of one's imagination, of trust and of pride. The heights of pre-pubescent emotions rage out of control, with some steady, straightforward writing. There is nothing grand about the prose, and the characters we've seen before, yet they are so well delineated and so pleasurable to read that it makes us welcome them into our mind's eye. 8/10

"Book Covers" by Rebecca Hotchen. This is a sketch rather than a story, and not the only one printed (or re-printed) in this issue. Here we find ourselves visiting a dusty bookshop owned and operated by a misanthropic Mister Evans, and learn about those around him who are judgemental toward his ill nature while dismissive of their own. The piece relies almost wholly on description to display its theme, that of the "covers" we wear in polite and civilized society to hide the true uncaring beasts that we naturally are. The story is well written, using a number of literary tropes, including pathetic fallacy, allusion, alliteration, contrast, and so on. There are so many devices that the story could replace a senior high school English textbook. And really, this is where the problem lies, for its technique weakens its theme.

Here be spoilers: The personification of fire and wind removes weight from the idea that the bystanders are responsible for Mister Evans's perishing. The bystander, just as the reader, is inundated with images of two great "beasts" battling amid the destruction of the book shop: "The howl of the wind merged in symphony with the low roar of the fire." (37) These two creatures, personified elements, are surely phenomenal foes, and no human can even think of silencing such a symphony. Yes, the bystanders could have and should have called for help, but these beasts cannot be tamed and the force of shock in the midst of such a spectacle is understandable. To a certain extent this exonerates the bystanders, and hence puts a dent into the intended thematic thump. Aside from this, nonetheless an enjoyable read. 6/10

"Clocks without Hands" by Stephen Ross. An old man's anecdote in the form of a letter. This is prose that implies rather than states, and it works because of its direct implications built into solid, concrete descriptions of the people the man encounters daily on the bus. I don't wish to discuss this at length for fear of sullying anyone's own impressions; the thing is, this is a great story and I was glued to the page from the start. It's best to know as little as possible and let the story affect you on its own. 7/10

"Stone and Wind" by Carl T. Abt. (Previously published in The Denny Stall, May 2008)
A woman is sculpting a "child of stone" that she has named Crazy Horse. The weakest of the stories in the issue, I did not like prose: it was dull and trying hard to impress. The narrator was not terribly interesting and I just did not care. 4/10

"He Had to Go" by Bruce J. Berger. A man searches for solace following the death of his wife. Fairly well written and at times touching, I must admit I was bored through the mid-sections. I tried to re-read it a few days later, thinking it was just my mood at the first reading, but couldn't do it. I did like the dream sequence (it contains a hilarious line that I won't give away) and the ending too was good. 5/10

"Scarred" by Kevin Brown. (Previously published in Conclave, Issue 1, 2008) The final story is essentially a piece of flash fiction. Well written, but... 5/10

The non-fiction selected is cosmopolitan in setting, but each deals with an aspect of human nature's response to some form of duress. Less like essays and more like anecdotal memoirs, they read easily, but while they each leave an impression, they do not give much food for thought.

"Fanfare for a Soldier" by Randy Lowen (previously published online at Unlikely Stories) is a letter from a veteran to the son of a veteran friend. Told in a visual, story-like style, it is more than a character sketch as it deals with the consequences of first-hand battle. "Baghdad, Tuesday Morning" by Stephen Williams is a powerful sketch of a seemingly random shooting. "Rage Against the Machines" by Mary Whitsell is a humorous yet even scary look at the trappings of modern teaching conveniences, while her "Double Standard" is another amusing tale of a teacher's woes, and while it reads well, it ends too suddenly. It also borders a little too closely to ranting; just as the teacher has woes which the students are unaware of, I'm sure the students' have their own trouble.

The poetry I leave to reviewing hands more capable than mine.

Posted by Casual Debris at 8:02 PM