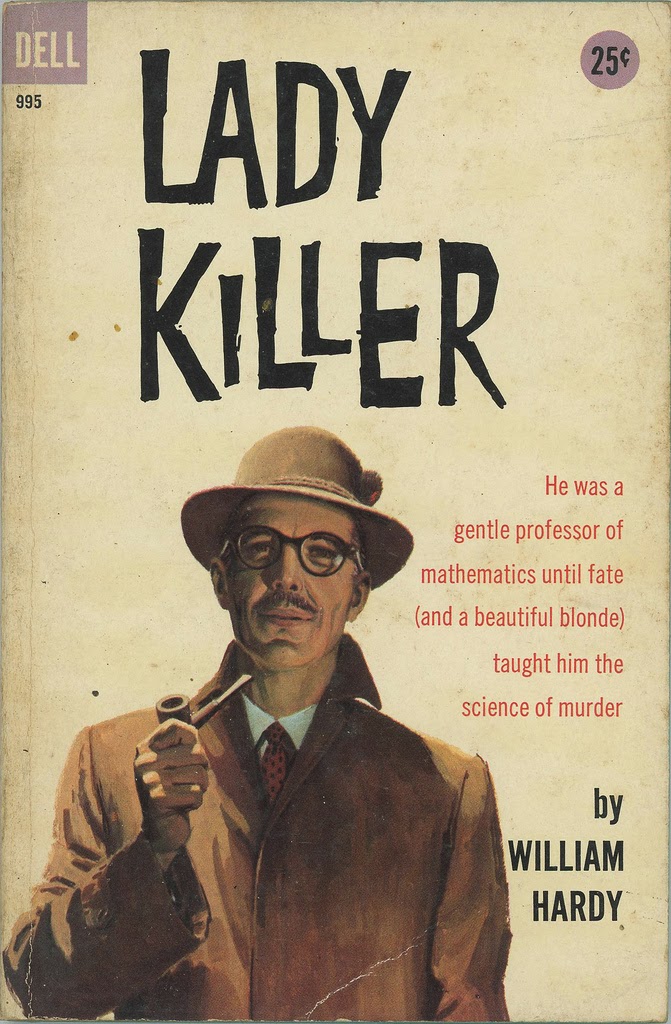 The 22 November 1957 edition of The Spectator blurbs that Lady Killer is a "readable" crime novel featuring "yet another mild-mannered man" in a work that adds "little to what Mr. Iles did, once and for all, in Malice Aforethought." I'm not familiar with Francis Iles's novel, though it appears to hold up well, while William Hardy's Lady Killer seems to have been immortalized in lukewarm a Spectator review blurb. In fact, I had to manually add the novel to Goodreads where it did not yet exist, though a small number of little-read Hardy works do (intermingling, incidentally, with other books written by other William Hardies).

In Lady Killer, mild-mannered Earl Borstleman decides, on his fortieth birthday to kill his wife. As a mathematician he feels he can, via the supreme logic afforded by his intellect, produce a perfect crime. With some pondering, both patient and impatient, he settles on a plan to confuse the crime amid others, to essentially kill five unrelated women in his college town, and insert wife into victim slot number three. Conveniently, a bright student, a recent returnee from the Korean War, would fit in nicely to take the fall for the crimes, and Prof. Borstleman could live happily in his little OCD world.

The flaws in the novel are numerous, yet as the reviewer of The Spectator pointed out over half a century ago, it is readable. Quick, somewhat enjoyable, somewhat interesting. Utterly flawed.

"It was a beautiful day, and the fear and ugliness back there had nothing to do with her or with Bob or with the world they lived in." (49) Korean War vet Bob Adams is haunted by his experiences in battle and harbours much anger toward the world. Evidently he witnessed the killing of a superior standing beside him, and is having difficulty coping. (Though he performs well in class and manages to date a pretty young classmate.) Unfortunately for him ugliness exists even in a small American college town (and this could have been a nice sidelong theme throughout the work), as he is soon to become the prime suspect in a series of killings. With the avowed logician Borstleman acting less than logical, you'd think Bob would have little to worry about, but author Hardy weaves the plot in such a way that the ugliness of this world is one made up of coincidence.

The problem with Borstleman's logic is plentiful. Though it is understood eventually that the killing is driving him loopy, his careful planning of the first murder is less than careful. He tells himself he mustn't do anything out of the ordinary, yet the night of the murder he invites two students to his home for coffee, which he hasn't done in many years. He tells himself to select five unrelated women to be his victims, and then chooses the department's secretary Emily Joyner as victim number one; though perhaps Joyner hasn't actually met Sarah Borstleman, the two are immediately linked to Earl himself. He tells himself to space out the murders, to commit one a month, and then kills landlady Nancy Miller a mere two weeks following the killing of Joyner, and then is impatient to do away with wife Sarah.

The greatest flaw, however, is believing that a man as obsessive compulsive, as neat and clean, as orderly as Borstleman would ever marry a woman such as Sarah. She smokes, is untidy, wears appalling house dresses, and overall grates on Earl for countless reasons. This topic is never approached.

And yet the novel does manage to be readable and somewhat enjoyable. The locale is well constructed and the scenes are quite visual. There is even some suspense in various parts. The novel begins well enough as we follow Borstleman planning and committing the first murder. Then the point of view shifts from a limited third person to complete omniscience, which is jarring just as we were made comfortable in Borstelman's skin. Moreover, with the shifts in point of view we experience shifts in tone, and Hardy includes some humour with the bumbling local police, which does not work one bit.

Readable, but there are enough readable works out there that I would not recommend it, and allow Lady Killer to live in two obscure reviews: The Spectator and at Casual Debris.