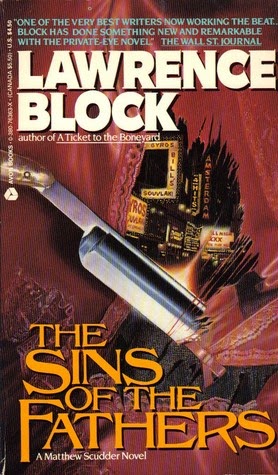 For this week's Friday's Forgotten Books, please visit In Reference to Murder.

An integral element in the private investigator novel is the urban world in which he exists. With Matthew Scudder the reader is immediately immersed in the gritty urban landscape, one shaped not only by the violent and chaotic society that upholds it, but by Scudder's own broken perception of the world around him. Whether New York or the outlying farmlands, wherever Scudder chooses to live that world, through his eyes, would become broken and damned.
Like many readers I was quickly immersed in the dark and gritty world of Matthew Scudder, excited that there are many more to follow. Before even half-way through Lawrence Block's first Scudder novel I was convinced I'd finally come across a character I wanted very much to pursue. Having now completed The Sins of the Fathers, I know I will read In the Midst of Death soon.

The novel contains two story-lines; the murder investigation of prostitute Wendy Hanniford and her roommate Richard Vanderpoel, and the daily existence of former cop Matthew Scudder. Most interesting was Scudder's world, his attitude toward the complex urban society he lives in, from its horrid crimes, corrupt police and the regular people who attempt to eke out an existence amid the chaos. I certainly enjoyed the mystery and the straightforward interrogative and investigative approach, yet the circumstances around the crime were enhanced by the world in which it occurred. Figuring out what really happened is not difficult, yet the reasons behind the crimes and the punitive act of revelation overshadows the reveal. It is not a who-dun-it, but focuses more on the tragic aspects of the crime, to the point that for once in such a novel I was extremely sympathetic toward the victims and understood the tragedies of the death not simply because death in the form of murder is tragic.

Though published in 1976, the novel is set in 1973: Wendy Hanniford signed a lease in 1970, which according to Scudder was three years ago. (p. 40) I'm not sure of the relevance of 1973, of setting it in the near past upon publication, as it seems to be a minor detail in the book. What is important is that the story is set in the 1970s, and not for any social reference. For one thing, the murder of Hanniford would today be solved quickly due to DNA testing. For another, there are small incidents that are dated, though these have no impact on today's reader.

First there is a visit to the bank. "It was my first visit since the first of the year, so they entered some interest in my passbook. A computer figured it all out in the wink of an eye." This is no longer impressive. The only thing that hasn't improved about baking since 1973 or 1976 is the amount of interest rewarded for allowing them to invest your money.

DNA testing and outdated bank computing is irrelevant since the poignancy of the novel is Scudder's world, the gritty, corrupt and utterly unsympathetic New York. Yet in this damaged world, our broken hero manages to exude sympathy, both while delivering sensitive information and while delivering painful punishment. Among the straongest scenes in the novel is when a young, inexperienced thief tries to mug Scudder, and though it has nothing to do with the novel's mystery plot, it has everything to do with Scudder and with Lawrence Block's New York.

Email ThisBlogThis!Share to TwitterShare to FacebookShare to Pinterest
Casual Labels: Block Lawrence, Sins of the Fathers The