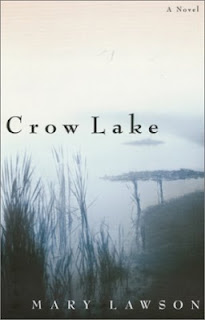 
Not all tragedies are at the caliber of Oedipus Rex. Some are quiet and personal and play out in a land less opulent and recognizable than Ancient Greece. Crow Lake is the story of four siblings growing up in the harsh, farming landscape of the fictional Crow Lake, and their setting is amid the vast landscape of Northern Ontario.

Told through the point of view of adult child Kate Morrison, once the third child of the orphan quad and now a well educated graduate researcher. Since leaving home Kate has been lugging the guilt of having been the one to leave the farm to earn a modern education and an urban career. Originally it was eldest Luke who was destined to go to teachers' college, then brainy second son Matt, but it is Kate alone who has managed to make the leap from Northern Ontario small town to big city education.

Though education is portrayed as the single stepping stone toward success, life on the land, along with its hardships and drama, is not entirely frowned upon. This is Canada, after all, and in Canadian literature it is often our ties to the land that help define a great part of who we are as individuals. The geography of the novel is well delineated, as are the characters, and these two and their relationships are what make Crow Lake such a good read, more than the actual events of the story. The plot is made up primarily of smaller events and struggles: in the past it is the family and the community's attempt at keeping our orphans together in the family home, whereas in the novel it is Kate's inability to bind the life of her childhood with that of her academic present, and of the man she loves. Melodramatic sounding, but quite interesting and very real.

There is an inconsistency between past and present, and I found myself far more interested in child Kate over the adult version. Boyfriend Daniel is too good, and exists primarily as a deus ex machina, being the outsider who finally brings Kate to accept that the tragedy of the past is not the real tragedy of her relationship with brother Matt. The childhood sequences, on the other hand, are vivid and compelling, and I would not have minded a greater detailed buildingsroman, as in the days of the Victorian and Edwardian eras.

But of course what I wouldn't mind is not necessarily the author's intention, and in Crow Lake Lawson's intentions are clear. Though there is little subtlety in her approach, she succeeds with the end result.

Posted by Casual Debris at 5:48 PM

I really enjoyed this at the time. I read it right after another first novel with Red in the title. Can't remember it now but they really stood out.

It is a good book & I'm a little surprised not more people have read it; it was very well received by critics. Her follow-ups didn't have much impact.