The recent announcement that this year's Pulitzer Prize fiction committee has declined to grant a winner this year left me feeling quite angered. In an era when the arts are being threatened by cuts, and when serious fiction seems to be ignored in favour of trends, people need to be motivated to read, and the Pulitzer, among other popular prizes, normally helps generate excitement in literature. This act sends a number of uninspiring messages to the public, most prominently that 2012 has given us plenty of material for future articles on "forgotten books." I was infinitely pleased to see Ann Patchett's article in The New York Times, "And the Winner Isn't...", which I found not only thoughtful but quite impassioned, and her article made me more excited about this past year's American fiction than the entire industry known as Pulitzer.

Thoughts lead to thoughts lead to thoughts, and among the many thoughts blaring noisily in my head is the idea that perhaps there might have been a year more deserving of not having a prize presented. Every year every single award bestowed can lure appropriate criticism for or against the selection, and while I disagree with many (most) award choices, the winners themselves are not generally utterly undeserving. My favourite example is the awarding of the Man Booker Prize to Ian McEwan for his satire Amsterdam. I admire McEwan's work, but there were far better books that year, and McEwan himself wrote FAR better books, including Black Dogs, Enduring Love and Atonement. It doesn't make the book undeserving, however, and there is certainly a large divergence between the tastes of prize judges and the reasons they select any particular book. Prizes are notorious also in that winners are frequently the result of a compromise between judges. Three judges have each their single favourite, but since their own tastes and selection logic differ vastly from one another, they agree to go with the fourth book, which, while nobody's favourite, is a safe bet, and at least this way they can all stop bickering and go home to their families.

My vote for the year the Pulitzer board should have declared no award is 1975. The award recipient that has always boggled my senses is Michael Shaara'a The Killer Angels. I understand that the novel represents much of the Pulitzer's mandate (yet doesn't David Foster Wallace's The Pale King in its own right?), and I also understand the novel has led historians to re-examine the roles of certain players in the Battle of Gettysburg. This is wonderful for historians and Civil War enthusiasts, but not necessarily for literature. The selection committee was likely influenced by the fact that there was a resurgence in interest in the American Civil War in the early 1970s, not too long after the event's centennial, and likely the Pulitzer board has been waiting a long time for the next Red Badge of Courage. 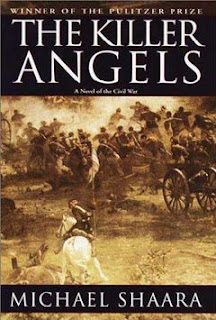 The Killer Angels was written by a struggling pulp writer after visiting the historic Gettysburg site. The novel is somewhat passionate, yet it is written as though it were for a small-time pulp rag of the 1960s. The author's sentiments are clear, without any objectivity toward character and events, except perhaps for the detailed military stratagem. Much of the novel is detailed fighting, which got tired early on. The novel lacks proper pacing, developed characters (regardless that its peopled by historical figures alongside the fictional) and most importantly it lacks good writing.


Let me know what year you think the Pulitzer, or any other major fiction award, should have abstained from selecting a winner.

For a list of other books forgotten this week by Pulitzer, and most others, do yourself a favour and visit Patti Abbot's site.

[Edit: someone reminded me that Richard Adams is British, and hence Shardik is not a "notable American fiction." Thanks for the note.]

Some very good points here Zybahn - I certainly thought the same when AMSTERDAM won, a book which strill strikes me as being amongst McEwan's least successful efforts actually. It was quite telling I though that the decision of the non Pulitzer Awards was instantly met with frustration about the poyential for lost sales rather than the message it was sending out about the current state of literatture!

Shardik was British so therefore not eligible for a Pulitzer. And I would not consider Jaws anywhere near worthy of a Pulitzer-Actually a much better film than book.
I do love Dog Soldiers and The Dispossessed tho.

Well, it doesn't say much about literature, so much as the Pulitzer process.

I think you're too hard on Shaara, to be sure...much as there were no pulps, essentially, to write for in the '60s. I haven't read THE KILLER ANGELS yet, however. Shaara has written some impressive sf and sports fiction...I've been meaning to get around to his career-maker (and cottage industry for his son) for years, of course...

And I should write, Had written.

Thanks for the typo catch.

I probably am too hard on the book, but reading it a couple of years ago left me awfully disappointed. I must admit I do get influenced by major award-winning novels, expecting too much. I've long since been disillusioned though.

(It didn't help that I read it for a graduate course on Civil War literature, where it truly pales in comparison.)

I certainly agree with you. There are dozens that qualify for the Pulitzer this year, and it was thus back when THE KILLER ANGELS won.

If you're thinking about reading a classic Civil War novel, skip THE KILLER ANGELS and read Alden Carter's BRIGHT STARRY BANNER. It was published in 2004 but I didn't stumble on to it until 2010.

It sticks to history but the writing is grand, scenes that might have come out of BLOOD MERIDIAN. Not a sentimental novel, but as hard as history itself==think of Shelby Foote's THE STARS IN THEIR COURSES.

Carter seems to have been a one-hit wonder, unfortunately.

Thanks Richard for the tip; I've added Carter's book to my "to read" shelf on Goodreads.

A very belated thanks for your comments Steve. I just came across your note in my blogger spam folder. I've since requested e-notifications of all comments so hopefully no others will get lost.