Crying Just Like Anybody: Stories from The Fiction Desk 4 (2012) 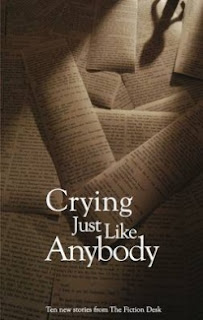 
It took me a little longer getting around to the fourth release by the good people over at The Fiction Desk (where they've recently updated their site). Volume four reads much like three in that while there are no truly stand-out stories, they are all good. Unfortunately the last two stories were a bit of a let down for me, though not bad stories by any means. My favourite story here is "Crying Just Like Anybody," followed by "Just Kids."

I recommend a subscription to The Fiction Desk, my favourite fiction journal of 2012 (no I haven't read them all), particularly now that they are offering a deal.

Depression-era New York and an almost nineteen year-old Anna tells of when her boyfriend Johnny (really Gianni) found a Martian. Amusing and even touching, "Crying Just Like Anybody" has a simple theme clearly implied by its title, and contains some nice detail to elevate its ideas.

And its the details that make this story so engaging. Like Mars's moons, Phoebus and Demos, no one in Manhattan goes by their actual names. Not only are we all alike, we are also not truly ourselves. Notions of individuality are set aside as we are told that Manhattan is a cosmopolitan place where, regardless where you are from, Ireland or Germany or Italy or even Mars, we are alike.

Incidentally, being Hungarian (as I am in part) transforms the story since, though I didn't catch on to the phonetics right away, I quickly realized what our Martian was wanting. Of course I won't give it away.

There is also an interesting background story by author Richard Smyth posted on the TFD blog.


I'm the One by Miha Mazzini. Translated by Maja Visenjak. 7/10

A voice message from a Slovenian mid-level government clerk to an estranged child who had fled to America. Not as much about the paternal-child relationship as I originally expected, and more about accepting responsibility on a humanistic scale. Some solid bureaucratic absurdity reminiscent of nineteenth and early twentieth century Eastern European fiction.

Frank is fed up with the young teens who loiter on the street below his third-floor window, and when his more forgiving wife leaves town for a while, he takes it upon himself to start a little war, only to then fear for his safety.

This one surprised me, for though the intent was obvious early on, the direction was not. Another story to hover the line of amusing and effective, it touches upon a variety of themes ranging from prejudice (ageism), media influence and how we can be driven by anxiety despite reason being so close at hand.

For some back-story, visit the TFD blog.


Wonders of the Universe by Colin Corrigan. 7/10

Kevin and Edel are having marital problems and their counsellor recommends they watch Wonders of the Universe, a BBC series, which oddly brings them closer. Yet while Edel becomes curiously attracted to the show's host Brian Cox, Kevin begins to notice tenant Angela and her overt sexual flirtations. Told through Kevin's point of view, the story is highly entertaining. It reveals to us that the most insignificant thins can be the most important, and proves it with the story's touching conclusion.

Corrigan's second TFD story after "The Romantic" in issue two, All These Little Words, "Wonders of the Universe" is easily the superior story of the two.


Across the Kinderhook by Matthew Licht. 6/10

A childless couple visit a successful old friend, only to discover that the facade of perfection is marred by the fact that their beautiful little girl is non-responsive. Until she inexplicably responds to the visiting woman. A good story but unfortunately the narrator is a little too unlikeable and the scene where he wanders the woods a little too uninteresting, partly because he is not terribly likeable while the more interesting characters in the story were left behind in the house.

"The scariest thing I've ever seen was my granddad's phantom." This story of a bullied little girl and her collector of oddities grandfather took me by surprise. I anticipated the ending, and yet it was effective nonetheless. The two stories, girl and grandfather and girl bullied at school, are narrated in separate sections, not interwoven except when the anticipated revenge comes about. The story closes with a strong image.

A rare second person story tells of the doomed relationship between a young Londoner teaching in Brazil and the beautiful woman he falls for and takes home. There is nothing extraordinary about the story but the prose is solid and the emotions well delivered on paper.

For background story by the author you can check out this blog page.


Can We Have You All Sitting Down, Please? by William Thirsk-Gaskill. 6/10

This sketch features a professor who recounts some important points on current social behaviour via the achievements of computer science pioneer Alan Turing. The narrative, told through the point of view of the single attentive student, is less story and more lecture, and yet the lecture is a fascinating one, placing the technologies we are constantly hooked to in a thought-provoking context. As a non-fiction piece I would rate it higher than as a short story, per se. Good, smart stuff.

Having lost his job and not wishing to upset his wife by telling her, our narrator takes on the career of robot busking, painting himself silver and impressing passers-by with his combination of statuesque stillness and slow robot whirring motions. Amusing, entertaining, but not too memorable. I like the title and its play on Isaac Asimov's popular collection I, Robot.

A troubled man hosts an unusual dinner party, during which he serves the barely edible while humiliating his guests. A good enough story but I was anticipating a more satisfying finish. Plass wrote "The Maginot Line" for TFD 3: The Maginot Line, a far superior story.

Posted by Casual Debris at 3:19 AM

Email ThisBlogThis!Share to TwitterShare to FacebookShare to Pinterest
Casual Labels: Crying Just Like Anybody, Fiction Desk the, journals