Behind the Scarlet Door at Goodreads
For more Friday's Forgotten Books, this week please visit Davy Crockett's Almanack.
[Edit] Just realized that TomCat reviewed this title just as positively on his blog. 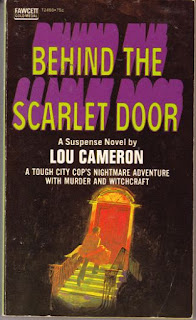 Due to his knowledge of Cymraeg, a Welsh cop is recruited to help investigate an unusual case involving the occult. The autopsy of a recent corpse belonging to a dancer reveals it to be at least two weeks old, and yet police interviewed her only two days before. Later the body of a local witch is discovered, dead for well over a month, though our hero himself had just interviewed her. This is the nifty premise of this highly entertaining piece of pulp.

Lou Cameron was a prolific genre writer of primarily westerns. With Behind the Scarlet Door, however, he manages to weave a plot involving zombies, witches and warlocks, invisible cats, black roses, hallucinogenics, voodoo, Welsh folk tales, Moravian customs and the hint of time travel. Not to mention a love plot involving our Welsh hero and a small-town German widow.

The plot complication is far busier than the plots of your average pulp mystery, with various characters, locations and a mountain of unusual events. Our cops are pretty certain the occult is cultish fantasy and a ruse, and that there are rational explanations for all the odd events, and their investigative drive leads the reader to concur. It is clear early on that this is not a supernatural novel, but an unusual mystery.

The writing is pulpy but in a good way. It is energetic, at times humourous, and despite the repetition and stereotypes, it never wanes. The publication date of 1971 is evident throughout, displaying bellbottoms and afros, but dated primarily from a self-conscious awareness of race and gender. Black people are constantly referred to by their race ("The black detective said"), but not in a repressed racist ilk: black detective Pete Custis is the smartest of the cops, a Columbia-educated and entirely indefatigable investigator. He is far superior in every conceivable way over our often clueless protagonist Morgan. Women are also well educated, and there is no struggle to create a feminist world-view, no awkward "living in a man's world" comments as Michael Crichton drowned us with in The Terminal Man (1972).

The glaring exception to the easy social awareness is, perhaps, with Cameron's allusions to homosexuality. There are no openly gay characters in the novel, and yet there are several mentions of homosexuality, usually derogatory though primarily as an attempt at humour. Cameron himself was not necessarily homophobic; instead the era, beginning to accept blacks and women as equal to white males, was still feeling insecure around gay men.

The novel's complication is, well, complicated, and don't expect to try to piece everything together. The ending is unexpected though not shocking, and many of the puzzle pieces are semi-red herrings, leading perhaps to one piece of clue, but not always to the outcome.

This entertaining bit of silliness from Fawcett Gold Medal books is highly recommended.

Posted by Casual Debris at 1:34 AM