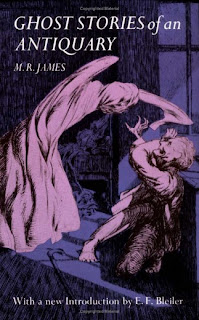 For an overview of James's early fiction, please visit this article.

Many of the tales in this collection are oft anthologized, selected over the decades by many established editors, such as Groff Conklin, Peter Haining, Mary Danby, Isaac Asimov, Joan Kahn, Bill Pronzini, Stefan Dziemianowicz and of course, over and over, by that great recycler Martin Harry Greenberg, and others.

"One remark is universally made by those to whom I have shown the picture: 'It was drawn from the life.'"

A Cambridge collector of ancient volumes named Dennistoun visits an old church in St Bertrand de Comminges, a "decayed town" near Toulouse, where he encounters the oddly-behaving verger. The older man, witnessing Dennistoun's interest in the church's minutest details, invites him to his home to look at an ancient scrapbook. The skeptical Englishman obliges the old man, only to discover that this ancient tome is not only an exquisite rarity, but that the horrible depiction of a hairy demon laying siege on Solomon and his men is more than just a drawing.

A story of demonology linked to Christianity, and of an ancient medieval text, elements which were plentiful in the early creepy tale. Religion was often linked to early supernatural of stories, sometimes simply in order to explain the supernatural element. In this case the monster, or "ghost," is a demon, a minion from hell, and an ancient book along with a curse is tossed in for good measure. Early supernatural stories often contained one of the three elements: a religious or pagan curse, a demon-like monster or an ancient text; here James combines them. Many elements indeed, yet there are no actual ghosts in this antiquarian "ghost" tale. It is, nonetheless, an effective story, obvious for our age yet nonetheless engaging.

Unlike its predecessor, "Lost Hearts" is a story concerning black magic and a wealthy man's desire to gain immortality. When Stephen Elliott is orphaned shortly before his twelfth birthday, he is taken in by his much older cousin Mr. Abney. Though his reputation is that of a miserly recluse, his servant Mrs. Bunch tells Stephen of the two previous orphans Abney had taken in. Oddly though,both those orphans soon disappeared without trace. Runaways, the good Mrs. Bunch assumes. It's clear to the reader that Abney is involved in some malicious scheme, and that young Stephen is in terrible danger.

There is some fine character delineation, particularly of Mrs. Bunch and the butler Mr. Parkes, though Stephen seems in steady shape for an eleven year-old who just his parents. But I suppose child psychology was not yet advanced by 1895. As with most his tales, there is a truly creepy moment with some real ghosts this time, a moment I don't wish to spoil for anyone. The ending itself is just a little too sudden for the excellent build-up, and I will say it again, "nonetheless engaging."

Another of James's most anthologized pieces, this little tale concerns a Mr. Williams who has the responsibility of purchasing works for the Canterbury College museum's "already unsurpassed collection of English topographical drawings and etchings." He receives Mr. Britnell's latest catalogue, who turns his attention to a particular mezzotint, for which he is charging an unusually extravagant price. Having faith in Britnell's knowledge, Williams orders it, only to be utterly disappointed by the amateurish take on a very plain setting: a house and its front lawn. Yet over time the artistry becomes inexplicably evident as the scene begins to change, and a grotesque figure appears on the lawn. Stranger still is the fact that, looked upon at intervals, the figure is clearly getting closer and closer to the house.

One of James's greatest works. The familiar tone and humour at the expense of golf is not as well-placed as it is in "'Oh Whistle, and I Will Come to You, My Lad,'" James manages nonetheless to maintain a high level of suspense amid the creepy premise. This story differs from many of its companions as there is no immediate threat, but instead a ghostly mystery to solve, which is all nicely explained at the end. Moreover, the ghostly apparition is not a climactic or singular moment, but is spread throughout most of the tale.

The Cambridge buyer Dennistoun from "Canon Alberic's Scrap-Book" makes a minor appearance, which adds to the fabrication that these tales are factual, and helps to add some consistency amid the stories.

"It will be long, I think, before we arrive at a just estimate of the amount of solid reason--if there was any -- which lay at the root of the universal fear of witches in old times."

The unfortunate Mrs. Mothersole, despite many coming to her defense, is condemned as a witch and hanged in public. The main culprit in accusing her is Deputy-Sheriff Sir Matthew Fell, proprietor of Castringham Hall, who witnessed a creature in white up in his ash-tree. Running out he spotted a white rabbit scurry the ground and head toward Mrs. Mothersole's, and was convinced she is a shape-shifting witch. (He would have been luckier falling down a hole and sitting in on a tea-party.)

The story's a little more plodding as family and generational details need to be filled in, and I suppose James chooses to skip a generation to lengthen the time-span. Other details are clearly rendered for convenience, such as the poor cat who disappears down the ash-tree at the opportune time, so that the guests gathered can be conveniently lead to the story's conclusion. Despite minor bumps and obvious construction, in the end the read it is nonetheless quite effective, particularly since the ending is awfully creepy. The story is somewhat similar to Horacio Quiroga's 1907 short story "The Feather Pillow." It's likely that Quiroga read James's story, though "The Ash-Tree" is far superior. Quiroga's attempt at realism by adding a factual note actually takes away from the story, while James's knack at tale-telling alone heightens the story's fear factor.

Mr. Anderson visits the Danish town of Viborg in his pursuit of research concerning Denmark's church history. He is mildly curious about the local habit of avoiding the number thirteen, and even his hotel does not have a thirteenth room, so that Anderson is residing in Number 14. Yet late one night Anderson is returning to his room, and is convinced he passes by room Number 13, but when he looks for it in the morning the room is not there. Other strange things occur, highlighted by the fact that, looking out his window at the shadows of the hotel occupants against the facing wall, Anderson sees a shadow of someone to his left, exactly where the non-existent room would be.

I found "Number 13" to be particularly creepy, a ghostly situation that would freak me out if I were witnessing it. Like his other stories our protagonist is helped by some friendly locals, here being the landlord and the lawyer from Number 12.

The narrator tells of a set of manuscripts left behind by a Mr. Wraxall, who seems to have been putting together a book of travels. This particular set of events took place on a visit to Stockholm, where Wraxall became interested in an old church and the mausoleum containing the coffin of one Count Magnus. This incredibly ugly man is believed to have gone on the "black pilgrimage," from which he returned with something or someone. Ghastly things ensued.

Of the stories in this collection, "Count Magnus" was the least affecting. Its back-story is not as interesting and its moment of creepiness not as creepy as those in most of the other stories.

"Who is this who is coming?"

College Professor Parkins is on a golfing holiday in Burnstow, staying at the Globe Inn. A colleague from Cambridge recommended he visit a nearby long-buried site which once housed the medieval Knights Templar. After a decisive victory over his fiery opponent Colonel Wilson, Parkings decides to poke around at the site, where he accidentally stumbles upon an ancient object: a whistle blocked up with dirt and clay. Back in his room he cleans the instrument and gives it a few good blows, not realizing that the act has summoned a spirit from somewhere off...

Among James's most exceptional stories, "Whistle" not only contains a wonderfully frightful ghost, it also boasts a great little character study. Slightly longer than the other early stories, James allows himself the space to focus on some light humour which is amusing and doesn't distract from the story, while giving us greater detail concerning his haunted protagonist. Parkins is not only the requisite Jamesian academic, but he is a staunch and open disbeliever of the supernatural. Among the company he keeps, from his colleagues at Cambridge to the golfing Colonel, Parkins is solitary in his disbelief. The ghost stirs up a frightfully delicious ruckus in Parkins's room (I won't divulge details), and eventually, as is expected, Parking is cured of his skepticism.

The additional characterization adds an extra dimension to the story, and unlike "Count Magnus" the narrative never slows. Parkins is a more interesting man than Wraxall, so even when he's merely playing golf we glide alongside him, swept away by the tight narrative.

The best constructed and tightest story of the group, and my favourite alongside "Number 13."

Mr. Somerton pays a visit to the Abbey Church at Steinfeld to investigate the painted windows that, according to some ancient documents, are key to buried treasure. Shortly thereafter, friend and Rector of Parsbury Mr. Gregory, receives a panicked letter from Somerton's valet William Brown beseeching him to come to Steinfeld. Gregory makes haste, and arrives in the little town to find Somerton and Brown all a-tremble, locked up in their inn lodgings. Once Gregory has performed a favour by replacing some stones, Somerton rewards him by revealing an investigative and frightful tale of treasure hunt.

This story is similar to the earlier, convention-mocking Edgar Allen Poe story "The Gold-Bug," reviewed here. It follows the convention of a rational man receiving a distress call from an anxious-ridden friend, who follows his friend's instructions to meet him on some unusual journey. Both works also featured a cryptogram, and yet from there the similarities end. Like Poe's more standard stories, there is a greater element of the ghastly, which "The Gold-Bug" was absent of.

The ghost and requisite fright appears not in the middle of the tale as with most of James's early work, but near the end, and much of the story is played up to anticipate this ghost, the guardian of the ancient treasure. James has no shame in withholding evidence: "What is was I shall not yet divulge," for of course he is writing this tale for effect. With his casual tone he gets away with such technique, whereas any modern author attempting the same would be shamed and ridiculed to no end.

The fright is a good one but nowhere near James's best, and "The Treasure of Abbot Thomas" ends up a good though not excellent story.

Posted by Casual Debris at 9:12 AM

Today, I'm handling the links, but next week Patti will be gathering again...in the running for one of the least forgotten of today's selections, but welcome nonetheless!

On a discussion board at Goodreads I was recently surprised to learn how many readers of supernatural fiction have not experienced M.R. James.

Thanks for the note; I've updated the link to your site.