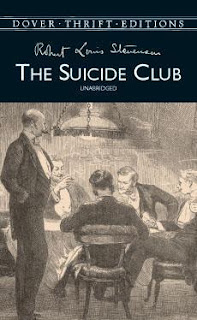 FB, I've known of these stories for decades, and never have gotten around to reading them...and we can hardly fault RLS for defaulting to adventure mode, given his career, even if the stories might be better if more sinister.

Thanks for the pointers!

Agreed Todd. Stevenson lives in the shadows of his contemporary latter Victorian giants, though I've always admired his writing. I highly recommend these; the opening to The Hansom Cab alone is worth the read even for non fans.

Thanks for this intro, I'm not really very familiar with Stevenson's work - except of course for TREASURE ISLAND which we read in school and some of his poetry - but this sounds like the sort of thing I'd enjoy reading. I love the title too, very intriguing.

Hi Yvette, I tend to prefer his shorter works over his novels. Of course there's Strange Case of Dr Jekyll & Mr Hyde, but the entire Arabian Nights & the rest of the shorts are strong reads. Suicide Club can be found in larger collections, including Arabian Nights.

I wasn't really too impressed with this collection as I thought it to be filled with an enormous amount of contradictions, unanswered questions, and unexplained circumstances. In a nutshell, way too many loose ends. I do however, love Stevenson's work and highly recommend both "Kidnapped" and "The Ebb Tide" to all who love good adventure stories.