Lovecraft, H. P. "The Shadow Over Innsmouth." Visionary Press, April 1936.
This article is part of my attempt to read all the 155 stories currently (as of 1 November 2022) on the ISFdb's Top Short Fiction list. Please see the introduction and list of stories here. I am encouraging readers to rate the stories and books they have read on the ISFdb.
ISFdb Rating:   9.3/10
My Rating:        9/10 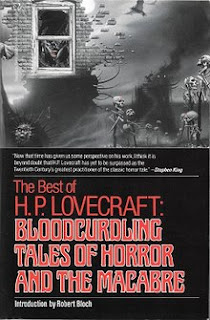 "During the winter of 1927-28 officials of the Federal government made a strange and secret investigation of certain conditions in the ancient Massachusetts seaport of Innsmouth."
H. P. Lovecraft's longest published work, "The Shadow Over Innsmouth," was first printed as a standalone book. This is not what Lovecraft wanted; he was actually unable to place it in a magazine, as the story was too long, and no editor wanted to serialize the novella. The problem, they argued, is that there is no clear break with which to split the work into two or three installments. The work has thrived, however, and has since become among his most beloved stories, and is included in many of his better collections, including The Best of H.P Lovecraft, from where I have read it.
Our youthful narrator is taking a budget trip in New England, where he is hoping to learn of the region's antiquity. He comes across some oddly-shaped jewelry which leads him to the fishing town of Innsmouth. A once-thriving community of seafarers that boasted a successful gold refinery, there is little left of the port town, as a plague appears to have killed off much of the town years before, and most neighbouring towns want nothing to do with Innsmouth. Because of this, our nameless narrator finds it challenging to enter the town.
Finally in the heart of Innsmouth, he learns of the town's extraordinary history by speaking with the chain grocery store's attendant, an outsider, and the town drunk. His nosiness is not taken well by the locals, and a chase through the dark streets of Innsmouth ensues.
Lovecraft's investment in building the town is excellent, as the story's geography is clear, and the town's details can be visualized almost down to the last brick. This detail adds to the creepiness of the story, the narrator's isolation and the vividness of the flight sequence in the latter part of the tale.
There is some inconsistency as the story wavers a little following the narrator's escape from the hotel. This is when the story can feel a little overlong, as he hears some pursuers and walks down a road, cowers in one doorway, looks at his map, hears more pursuers, wanders down another street... I am exaggerating a little, but there were a few paragraphs I rushed through at this point. However, the ending pays off nicely, as I was taken by surprise with the twist. I feel I shouldn't have been as the clues were all there, but I guess I was too busy brick-gazing to take notice.
The postscript, or post-twist, does leave a bit of a hole. The story is essentially the narrator's telling of his strange and frightening experiences. However, with the realization he, and the reader, make, and as he makes his motivation clear, it begs to question why he bothers to leave the record of events when he intends to leave the mortal world. My paragraph is vague as I don't wish to be more detailed for fear of spoilers, but I am making a point here.
Minor qualms of course, for a major work. This was my first time reading the novella, and I was surprised at how good it actually is.
Posted by Casual Debris at 11:41 PM

I might have more patience with HPL these days than I did as a youth, given his fustian and (still, to me) often clumsy prose, and some of the expressed attitudes don't help (I continue to wonder to what degree he would've fully shaken his early incdoctrination, given that his wife and post-divorce friend, and his chiefest young acolyte among the Lovecraf Circle of corresponding writer friends were both Jewish) (Robert Bloch was not observant, but nonetheless, young HPL was apparently a frothing bigot in several directions).
However, among the writers he's inspired, directly helping Bloch and Fritz Leiber, and setting models for Ramsey Campbell and Fred Chappell, and then T. E. D. Klein and Thomas Ligotti to all Do Better...and other writers of note, such as Joyce Carol Oates, love his work more than I do...so...