Ellison, Harlan. "Jeffty Is Five." The Magazine of Science Fiction, July 1977.
This article is part of my attempt to read all the 155 stories currently (as of 1 November 2022) on the ISFdb's Top Short Fiction list. Please see the introduction and list of stories here. I am encouraging readers to rate the stories and books they have read on the ISFdb.
ISFdb Rating:   9.18/10
My Rating:        7/10
"When I was five years old, there was a little kid I played with: Jeffty." 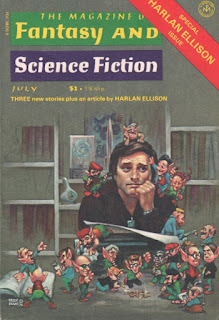 At the age of five, Donald H. Horton had a friend named Jeff Kinzer, or "Jeffty," as the kids called him. Donny grew and experienced life, from school to the army, and during these years Jeffty remained five. In his twenties, Donny settles down in his hometown and opens up an electronics shop, whereas Jeffty is still five. He rekindles his friendship with Jeffty, and soon learns that the five year-old has an odd relationship with the past. Namely, in his world radio stations broadcast old-time shows with new episodes, the movie theatre features new films starring actors who had died years ago, and comic books continue to publish the comics of yesteryear.
I often like Ellison's premises more than I like the execution. This story is about nostalgia, about a more technological-minded society that does not necessarily return a better way of life. Ellison states this, but he does not prove the point. The narrator is charmed by the nostalgia, but it is being five years of age that he wants. He wants the innocence, the freedom from responsibility. He is unhappy with his job, which he shirks off whenever he can in order to hang out with a five year-old, unhappy with the women he dates, and simply unhappy with the idea of responsibility. He immerses himself in Jeffty's old-time world as a source of recapturing his youth, but he does nothing to help Jeffty in his predicament. This is a forever five year-old with aging parents; what will become of him when he is orphaned? With no medical experiments, who can know of Jeffty's health or his life expectancy? Donny criticizes the Kinzers for showing a lack of interest in their son, but he instead takes advantage of Jeffty's gifts for his own entertainment and access to youthful emotions, but gives nothing to the boy which may help him progress through life as a five year-old. It is also Donny's world that eventually shatters Jeffty's, so that the boy is left with nothing.
Finally, one would expect that if a child does not age beyond five years, there would be medical interest, government interest, pharmaceutical interest in that finally a source for the fountain of youth has been discovered. But Jeffty lives with his parents wholly undisturbed by such potentially interested parties. The story is a fantasy not only in Jeffty's perpetual half-decade existence, but also in the way the world functions around him.
Still, despite the annoying narrator and many loose ends the premise itself is interesting enough, and the story can be, to an extent, thought provoking.
Posted by Casual Debris at 11:34 AM

Joanna Russ, in assessing the story for an F&SF book review, suggested that the last lines of the story should be Ellison's own, "They don't die of the old diseases. They die of new ones." (Close paraphrase from memory.) Ellison, unsurprisingly, took issue. It's not his best story, by me, by any means (though I remain a staunch defender of "The Deathbird", which engages in at least as much emotionalism, and the likes of "Pretty Maggie Moneyeyes", which manages to transcend some of the blithe acceptances of the times. A large Facebook group was discussing this story not so long ago...I'll get you the address for that discussion once on an Fb-burdened machine again.

Thanks Todd. I haven't yet read "Deathbird" but it is on the horizon as I run through the ISFdb list. I did like "Pretty Maggie Moneyeyes" more than most seem to have. I've only enjoy about a quarter of what I've read of Ellison, which is likely normal since he overproduced. The thing is, as I get older & re-read his stories, I tend to like them less and less. "Repent Harlequin!" especially, for some reason, which I recall loving as a teen on my first encounter. Ellison boasted a good deal about how quick he was in writing his stories, and sometimes it really shows, like in "Jeffty" where he does not seem to know exactly what he was writing.

Well, yes, sometimes it shows, and yet I suspect he labored over the likes of "'Repent'", which is still effective in part if excessively cute. Algis Budrys noted that from early on, Ellison wanted to consistently attack the reader, something with which Ellison consistently agreed, and sometimes that attack or at least attempt at shaking things up just isn't sufficiently startling. But his best work remains moving, for me and a number of others, I suspect.