Visit The Terminal Man at Goodreads 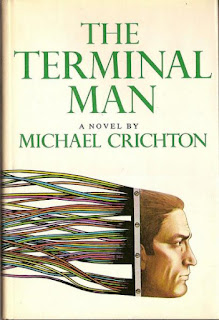 Visit The Terminal Man at ISFdb
This week's summing up of Friday's Forgotten Books can be found at Davy Crockett's Almanack.

Harry Benson, an average man suffering from violent blackout episodes following a car accident, takes part in an experimental operation that involves implanting wires in his brain in order to control his seizures. Though average, Benson is a computer programmer who has a great fear of becoming a machine, a fear that nears reality when his brain and the treatment it's receiving prove to be a dangerous combination, and he flees on a murderous rampage.

Which turns out to be not quite so murderous and perhaps a little less of a rampage.

The Terminal Man, Michael Crichton's second novel as Michael Crichton, is blurbed as being a "modern Frankenstein," when in essence it's more like a take on The Incredible Hulk. Our transformed man is not a constructed man, but instead is pushed to acts of violence which he cannot recall when in his Bruce Banner-like normal state. Unlike Dr. Frankenstein's monster Benson can be reverted to his previous self, while just like Banner he fears the monster that he can become.

Whether a Frankenstein or a Hulk or a Little Orphan Annie, the novel is downright terrible, offering us a minimal story-line with loads of filler and some of the laziest and silliest characterization I've encountered in a long while. Moreover, the dated and lengthy discussions of what the future of computers will bring is overdone and quickly tiring, likely more so in 2013 than when it was first published in 1972.

Author Crichton is a graduate of Harvard Medical School and frequently wrote about the dangers in expanding technologies. His most famous novel, the entertaining Jurassic Park, succeeds far better on all levels than this earlier and simpler work. In fact, Jurassic Park is more like Frankenstein than The Terminal Man, with near-zombie dinosaurs rather than a reanimated man (or parts of men). Jurassic Park has its own problems, but one thing Crichton managed to accomplish is rather than spout on about the dangers of this, that and the other, he let his characters do the talking while the narrator simply directed.

The blurb on the front of my Ballantine Books edition (eighth printing of the 1988 edition) reads "An absolutely riveting novel" (Life Magazine) while the back cover explodes with "A fascinating, splendidly documented thriller" (The New Yorker). These statements are likely peeled off from reviews printed in 1972, when the novel might have been more riveting and fascinating. In today's terms it is dated, silly and poorly written.

With such a minor plot-line the novel would have been a far better read at a hundred pages. At two hundred and sixty-one pages Crichton packs in details about what a future Los Angeles would face with greater subsistence on computers.

The novel is dated not only through a technical point of view, but its social stance is very much embedded in early 1970s notions of feminism. Our heroine Dr. Janet Ross is very conscious of being a woman in a man's profession, and had to deal with such tribulations as growing up with a father who was disappointed in having a girl rather than a son to follow in his surgeon footsteps. Despite Crichton's continued focus on the more basic issues related to feminism, he nonetheless has Dr. Ross putting on skirts and thinking of make-up, and the one real victim of the novel is a poor dancer (i.e. stripper) who is brutally stabbed to death with a screwdriver. 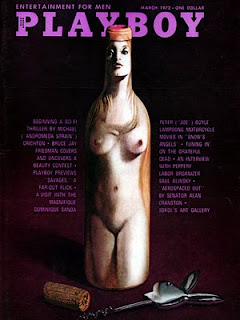 Not only are the characters badly delineated stock, they are downright silly. Surgeons head off on their own to investigate obvious leads as to Benson's whereabouts, and of course get beaten to a pulp. The most idiotic aspect is that these brilliant doctors select Harry Benson as the subject for the electrical implants, even though it is known to them that Benson's greatest phobia is that he become a machine. Crichton badly wants us to sympathize with Benson, reminding us throughout the novel that he is the victim, that his rage is the result of an overly-ambitious experiment, that he never wanted to hurt no one, that he is kind and charming (though he repeatedly stabs a dancer with a screwdriver). I could not for the life of me care about the man, and I wanted him to remain alive only long enough to kill off the other characters.

Oddly there are two computer techies who are discussed at length at the beginning of the novel, only to pretty much disappear, begging the question "What was their point?" It's as if Crichton made it up as he went along and forgot a few items along the way.

All of the lunacy that is The Terminal Man is made even worse by downright awful writing. Crichton gives us a bit of action, then rambles on about feminism or the terrifying computer-controlled future of Los Angeles, or the advances in neuro surgery, or whatever else he feels like spewing on about. Amid this tiring structure we are given such sloppy sentences such as this paragraph: "Suddenly Anders froze. She stopped and listened with him." The 'she' is technically referring to Anders, but since Anders is male the pronoun is referring to Dr. Ross, whereas Anders, the subject of the first sentence, is unexpectedly relegated to the object of the second. Aside from grammar, Crichton twice uses the simile "like a snake," first describing the Los Angeles freeway, and later Anders's arm. A little later the narrator tells us of Dr. Ross's fear of snakes, and I wonder at Crichton's anti-serpent attitude.

In other words, you might want to skip this one.

The Terminal Man was made into a movie directed by Mike Hodges, released in 1974. Benson was played by George Segal and Ross by Joan Hacket. I haven't seen it but am curious. Incidentally the movie featured two actors from John Carptenter's The Thing, Richard Dysart (Copper) and Donald Moffat (Garry). It also featured Jill Clayburgh and James Sikking, who will later rise to fame with his role on Hill Street Blues.

Posted by Casual Debris at 3:00 AM

My only experience with Crichton was Pirate Latitudes, a swashbuckler clearly inspired by Captain Blood. A lot better than this, methinks.

Thanks for the tip, but after this slop I'll be avoiding the guy for a little while.