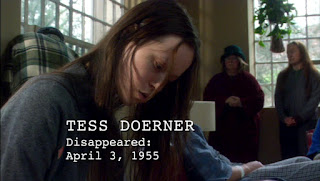 The next episode: Voices Carry.
Season One begins here: The Pilot.

Season two begins six months after the end of season one. We're told this in a clear subtitled narrative, even though at some point Shaun, and at another point Jordan Collier, seem to think it all happened a year ago. Perhaps the writers thought the show would be airing in the fall? Perhaps that little baby is warping our reality.

Much has happened this past year/six months/season and the effect is a slow-paced, extended length season opener in order to establish the present. Tom Baldwin has been taken off the 4400 investigation for putting a gun to another agent's head, but he's re-instated this episode thanks to Diana Skouris, though with conditions that he now screw up again. These conditions are put in place by Dennis Ryland's replacement Nina Jarvis (Samantha Ferris), who doesn't seem to get along with anyone. Meanwhile Diana has adopted Maia; Kyle has moved in with irresponsible dad Tom; Shawn has moved in with Jordan Collier, who has set up a cult building to house the returnees; and Lily, Richard and six month-old demon baby Isabelle are on the run.

The relationship and building trust between Diana and Tom has its consequences in that Diana helps her former partner become her new partner by having him re-instated. There is a sparring sequence between Fiana and new section head Jarvis which is a little awkward as it's quite forced (the writing I mean, not the acting). There's a nice contrast generating some fine irony as we learn that Tom is a bit of a negligent father to his biological son, while Diana is a terrific mom to her adopted girl Maia. In fact, I genuinely enjoy their relationship and actor dynamics, and there's some fine drama with Maia's wanting to fit in, so much so that she's lied about no longer having premonitions. 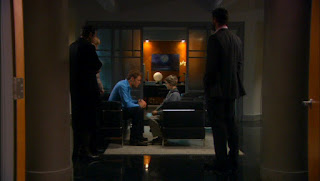 Shawn continues to be gullible, enjoying the high life at Jordan Collier's 4400 cult centre while healing people of their terminal illnesses, but only those willing to donate big bucks to JC's centre. Kyle is tossed out while trying to visit, as JC is keeping close watch on his prize returnee. Meanwhile, JC has written and published a book on the 4400, revealing all the truths about how the returnees have been burped up from the future to yada yada yada, and the unfortunate 4400 are still being persecuted, as some view this book as heresy. 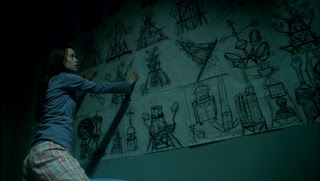 What saves this episode is the subplot. Schizophrenic patient Tess Doerner (Summer Glau, River Tam of Firefly) is compulsively sketching out some kind of tower, while the other asylum patients, and even the staff, are beginning to build it. Reminded me of Close Encounters of the Third Kind (you know, with the product placement for mashed potatoes). The purpose of the tower is a mystery, and there's some humour thrown in when a couple of agents are touched by the strange compulsive fever and join in the building. What I don't get is why Homeland Security is trying to prevent the erection of this tower since we've learned that the 4400 have been returned in order to help save humanity. Perhaps Homeland Security have other things in mind for us.

The episode features the nice addition of Jeffrey Combs, the Re-Animator himself, as patient Kevin Burkhoff who is taking good care of returnee Tess Doerner. 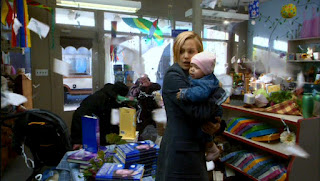 Meanwhile, back in the middle of nowhere, Lily and Richard along with devil spawn Isabelle are wreaking havoc across somewhere USA. Baby Isabelle can generate storms, open cash tills and get people to shoot each other and even themselves (a scene which recalls that disturbing sequence in John Carpenter's Village of the Damned). Tensions are generated as Lily is in tune with Isabelle while Richard seems to be getting a little creeped out, not to mention that his conscience is being affected while Lily's okay with all the baby weirdness. Moreover, Lily might be pregnant again, leaving us with the impression that if this continues she could end up mothering a brood of powerful and creepy baby soldiers for the future cause of mankind.

There's also a brief appearance by actor Hiro Kanagawa, who after appearing so effectively in Best in Show I'd recognize anywhere. 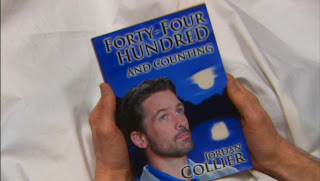