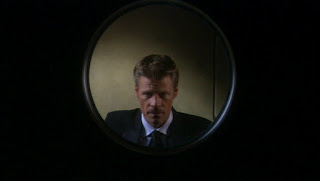 Previous episode: "As Fate Would Have It"
Following episode: "Carrier"

Tom Baldwin awakens one grey morning to discover that his life is suddenly and unexpectedly altered. His son Kyle is strangely affectionate, cultist Jordan Collier is Washington governor, and the 4400 phenomenon doesn't exist. While Kyle is preparing for med school, Shawn is a rising musician and his younger brother Danny is engaged to Nikki (you know, that chick who inexplicably disappeared after season one). The clincher occurs when Tom discovers he remarried two years ago to hottie Alana Mareva (Karina Lombard).

The back story in this new reality is that Tom suffered three weeks imprisonment by some bad people, would have died had he not managed to escape, and has spent the last two months rehabilitating. Those around him, including Diana, believe he is not ready to return, and that these stories of four thousand four hundred missing people is a concoction resulting from physical and mental stress. Yet Tom knows this reality isn't his, and helping spur that belief is a mysterious black door only he can see at the former 4400 Centre, which, in this reality, is the Jordan Collier Museum of Contemporary Art. It turns out that this reality is also new for Alana. She is a member of the 4400 whose previous life has been completely washed away. She was an art buyer and gallery owner, disappeared fours years ago, and lost her husband and son in a car accident a few years back. At first neither Tom nor the audience knows if Alana is telling the truth, and though we grow to trust her it is obvious she is somehow linked to the mystery. Yet time goes by, eight years and counting, during which Tom and Alana get married, or in this reality renew their vows. Meanwhile Kyle becomes a resident aiming to be a surgeon, Shawn is on tour with some band, and Diana gets a really nice new hairdo with some colouring as though she's discovered Dana Scully's hairdresser.

But Tom keeps seeing that door. 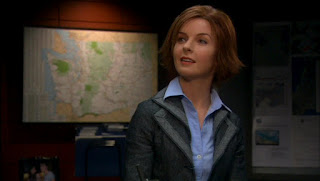 Spoiler. The idea is that the people of the future, in their seemingly limitless wisdom, planned all this in advance, and sent Alana back with the ability to create false realities. Being good and truly in love with Tom, Alana is unaware that she is the architect of this reality, having been pre-programmed to unleash the structure. The reason behind this plot is to give Tom strength in the form of Alana and their eight years of bliss together so that he can manage to successfully get through a period of serious crisis that is looming ahead. The viewer suspects that this crisis has to do with Kyle's assassination of Jordan Collier.

This idea is not a new one. The various Star Trek series have produced their own variations, yet the show that comes prominently to mind is that excellent Odyssey 5 episode, "The Choices We Make" (episode 1.6), which first aired July 27th, 2002, almost exactly three years prior to "Life Interrupted" and likely an inspiration. The idea itself is a great one to explore character, and while in Odyssey 5 we were offered the opportunity to observe different sides of five characters, here we get a variation of Tom Baldwin, an introspection of his character outside of the immediate 4400 scenario. We see him struggling with his duties toward family and career, his love of family and dedication to truth that threatens to tear apart the ideal family Alana has constructed in this world. We even get to see him cry.

Yet there is another important purpose to this episode, and that is the introduction to a new major player. Alana is now among the 4400 that we will be following during our search for the truth. She is not a replacement for Collier since the cult leader will surely return, yet I wouldn't be surprised to see another character untethered from the show's moors, namely Lily Moore Tyler who is, unlike hubby Richard, not even referenced in this episode. I say this because her character has lost her edge since giving birth to Isabelle, though I can't imagine her being sent off while Richard, still a strong character due his powerful conscience, is still around. 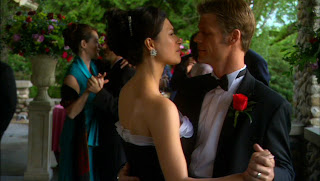 "Life Interrupted" was written by notable science fiction television writer Ira Steven Behr (oddly not credited on IMDb, so I had to fix that). Behr has written for a number of different series and faithfully for Star Trek: Deep Space Nine and The 4400. It is well made in several respects, and not just in a strong plot. The point of view is almost consistently with Tom, the audience following along as though by his side, and never is information withheld from the viewer; Tom learns just as we learn. Of course we are not in his shoes, but somewhat removed, and watch as he makes his own decisions, struggling to accept this new wonderful life with Alana, or to walk through that dark door and go back to the complications of a world that is on the verge of collapse. Notice I write "almost consistently." There are a few brief moments when we glimpse Tom through the eyes of others, most notably through Diana's eyes earlier on in the episode. When Tom first tells her of the returnees she is making faces, her back to him, so that her concerned scepticism is clear to the viewer but kept from Tom. This might have been the director's decision in order to confound the viewer, or to let us know that Diana is truly unaware of the 4400.

The only thing I am left to wonder at is that the people of the future have taken a great risk here. Sure Tom has a hot new wife by his side with a remarkable ability that essentially gives Tom his own personal holodeck, but spending eight years watching loving son Kyle grow and develop, along with the other people around him, and every aspect of that life, would lead to quite a bit of confusion. Though it all played out in only minutes, Tom did experience eight years, which is a helluva long time. This was not addressed in the episode and I doubt it will come up later, which is unfortunate, since not acknowledging this reality somewhat weakens the concept. 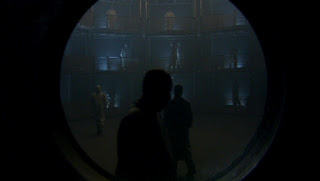