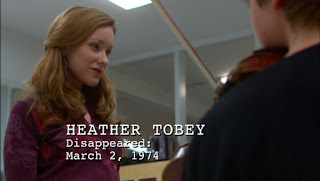 In an unusual and effective opening sequence, Jordan Collier is having one of those fits generated by Lily's bulging belly at the end of season one. This particular fit is occurring over an energetic violin solo, in the lobby of the 4400 centre with healer Shawn zapping Collier with life. The scene is effective partly because of the great music, but mostly because it's a distinctive contrast with the series conventions. More violin music accompanies the next scene, and I'm actually wondering if the music is coming from outside (you hear anything at all hours where I live) or if the dvd busted. It turns out that the music is (obviously) intentional, and it comes from this episode's subplot, featuring all manner of something I enjoy: art. 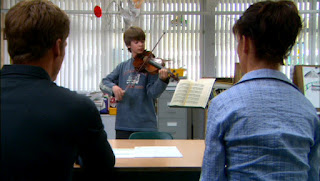 Junior high school teacher Heather Tobey (Kathryn Gordon) disappeared in 1973, and was lucky to get her job back at Van Buren Junior High School in Fairview, Washington, in 2005. In return she is bringing gifts to her new class, as she's able to channel the "light" in their eyes and bring out the inner artist. She's helped create violinists, painters and sculptors in a matter of weeks, and not the barrel bottom kind, but those potentially striking stardom. In fact I'd like to meet Ms. Tobey so she can help me bekome a gooder writter. In the meantime... The problem with this method of creating beauty is that, with all this 4400 hating, parents want Tobey removed from the school, and have gone as far as claiming she has abused their children. Exciting certainly, but unfortunately late in the episode the subplot moves away from the potentially interesting to the conventionally dramatic, dropping ideas for weapons as one boy who did not gain any special talents pulls a gun on Tobey and demands that she change him so he doesn't end up like his deadbeat dad. Sentimental, predictable, and not that touching. 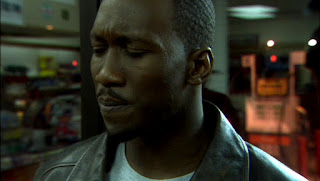 To balance this weaker subplot, the Richard/Lily scenario just got interesting with Richard's arrest at a gas station. Who comes to the rescue? None other than Jordan Collier. It appears that JC has changed for the good, and is even willing to have a little reunion with baby Isabelle, risking death to prove himself worthy. These moments are genuinely tense as JC's intentions are nonetheless ambiguous, and Billy Campbell shows that he can do well in portraying the fearful and anxious just as well as he does with the stolid and arrogant. 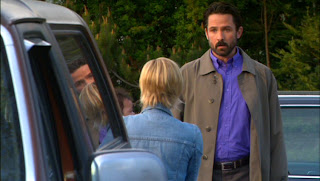 Meanwhile, Collier's right hand Shawn falls for pretty homeless girl Liv (Lindy Booth, below, who you just might recognize from the 2004 remake of Mall of the Dead). Unfortunately this provides us with a less than interesting scenario. The overarching idea is that healer Shawn, as Collier warned earlier, cannot expect to help everyone. Shawn is being naive, boyish, yet necessarily secretive of his powers. He tries to "save" Liv, helping her and by association her homeless homies, buying them food, jackets and a guitar for Liv. Things are getting nice and cozy but soon become complicated when his power is revealed. It appears that Shawn is not just Collier's successor, but also taking over the allegorical role of Jesus Christ. How far will the series take the analogy? I only hope they improve Shawn's story lines. 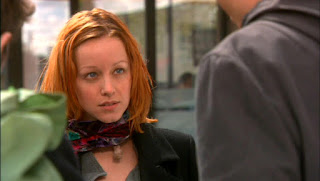 Finally, someone seems to be sharing Kyle's body, and I suppose that is the earlier reference to Joseph Conrad's novella The Secret Sharer. Kyle/Sharer is obviously doing something sinister during his lost time episodes. I do wonder if the writers are keeping in mind that Kyle was supposed to be Shawn, in that cousin Shawn was accidentally abducted in place of Kyle, so that the lost time kid was the one supposed to be healing others. Would he have joined up with Collier and saved him from Isabella's fits? Possibly, since Tom is less than a responsible father.

This final shot of Diana and Tom at the high school watching the violinist is reminiscent of American Idol. While Diana looks utterly impressed, Tom is looking at someone behind the camera, perhaps at us, wondering when those strings will break. 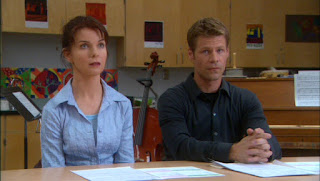