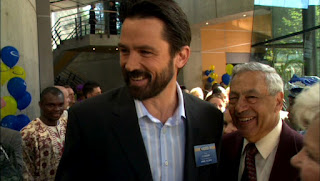 As Fate Would Have It (Episode 2.5)
Directed by Nick Gomez
Written by Craig Sweeny
Co-starring Robert Clarke
First aired 10 July 2005

As fate would have it, this is the first truly impressive episode of The 4400. Plot points converge, shocking details are revealed, and we're knocked over by a surprising cliffhanger. A few questions are answered, yet additional mysteries are generated. More surprising is that the episode is not a season closer, but only number five in a set of twelve. Also notable is that there is no episode subplot; the entire forty-five or so minutes are devoted to our returnee regulars. This helps to focus the episode as we don't need to waste minutes getting to know new characters or establishing new scenarios. 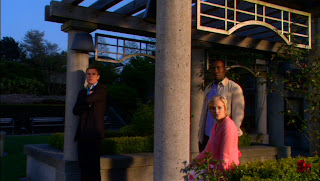 The episode centres primarily around Jordan Collier and exploits the Jesus Christ analogies. It opens with Maia's tearful claim that JC will die at the upcoming 4400 reunion. Though NTAC is willing to give Collier ample security, he shrugs it off, claiming he must continue with his purpose, and besides, he has his own security. The episode features a couple of red herrings, such as Miles Quinlan (Robert Clarke, who had a bit part in episode two of Harper's Island), a disgruntled former recipient of the 4400 centre key. We learn through Quinlan that the centre operated kind of like the Church of Scientology, which also sells different levels of information, making big bucks by telling members of their extraterrestrial roots. Another red herring is a professional assassin who has just flown into town, but unlike Quinlan this plot line reveals nothing of interest and is a mere distraction. This assassin herring does, however, contribute to plot in that it makes HC aware that the threat is real, and allows Tom and Diane to be in the climactic scene.

Meanwhile Lily, Richard and Isabelle are doing well at the centre. Their story line finally became interesting in the previous episode, and here becomes even more so with the drama of Lily's daughter Heidi (Genevieve Buechner) figuring out that Lily is her true biological mother. (Perhaps I'm just a soap opera lover at heart.) Heidi gets to meet Richard as well as Isabelle, who seems not to like the competition, bawling at the site of daughter number one. We later learn that Heidi is deathly ill, and Lily and the viewers wonder if demon baby Isabelle is up to no good. 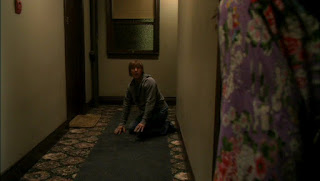 Kyle is still losing time, yet now has hazy images of digging and getting his hands dirty. Is he burying a body? Digging one up? He is zapped at a concert (some band called The Killers) and awakens after at professor Wendy Paulson's apartment, on the carpeted hallway outside her door. Paulson is understandably freaked out. Who is Kyle's secret sharer? What is the purpose of Paulson's role? Surely she must play into the main plot somewhere down the line.

Finally, in the episode's least interesting scenario, Shawn and cute homeless girl Liv are still a potential item, as Shawn "saves" her by taking her into the fold of the 4400 centre. Though she's certainly nice to look at, Liv is preachy and can be annoying, and it'll be interesting to see if this new life within the centre will change her. Does she have a larger part in the main plot? Are she and Paulson merely requisite love interests to bring in female viewers? 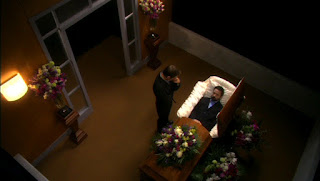 Despite the presence of Tom and Diane, Collier is assassinated. Baby Isabelle is no help; consulting her by touch, Collier earlier receives a vision that he must go on with the reunion. Even Shawn can't bring him back to life him. Briefly reviving Collier, Shawn has revealed his healing powers to the public, and Collier gives a great death line, speaking of Isabelle he says: "She lies." It's not Quinlan (who is at the reunion) nor the assassin (who has already been caught); it's a shady figure all in black who manages to get away from Tom's pursuit. At his funeral Collier's body goes missing, just as Christ's body went missing after his death. Will there be a second coming? Probably. Collier is too interesting a character to drop from the show. Finally, in a shocking finish, the assassin is revealed as Kyle, which I must admit I did not see coming. What a fantastic twist. So the people of the future sent Kyle back to kill Collier so the latter can have that second coming. One reason the writers managed to keep this from me (and possibly others) is that of all the characters in season two, Kyle does not mix with the others, so we don't immediately thing of him when thinking of Collier.

The episode finishes on a clear rip-off/homage to the ending of The Godfather, with Shawn in the role of Al Pacino and Liv in the role of Diane Keaton, the door shutting in her face. Like Michael Corleone, Shawn must take over from the family head to ensure the success of the business.

"As Fate Would Have It" is by far not a perfect episode; there are a few weak points. Aside from the less-than-interesting Liv scenes, the out-of-town assassin subplot was pointless and not very exciting. He can't be a very good assassin if everyone immediately knows he's just flown in and within minutes break into his motel. He could have flown into another city and taken a train or bus over. When Tom and Diane break into his motel room Diane discovers his identity too quickly by simply tossing an armchair over and finding some fake passports strapped underneath. Now we have a face. Moreover, when they first barge in a painting is knocked onto one nail so that it acts like a pendulum, but a minute later the painting is back on two nails, acting as a painting. (A small detail, I know, but sometimes these details are distracting.) 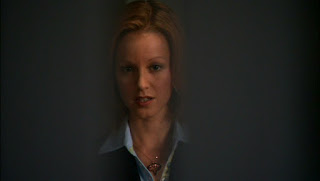