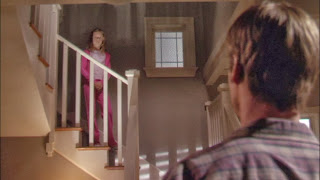 
Though a different director and a different writer on the follow-up to "Gone (Part 1)," the intensity in plot build-up as well as camera work keeps the story consistent. Often second parters act as little more than the climax of a strong hour-long build-up episode (The X-Files was often guilty of this). The let-down in this follow-up is not the level of suspense and mystery, but the idiocies revealed in the plot and its play with time travel.

Most time travel tales contain inherent flaws, and this episode from a time travel series focusing on its own self-contained time travel element, has many. For one, Maia's erasure from the present would result in alterations in the lives of other 4400s and in investigations of the 4400, yet none of that appears evident. A major question is that if her removal causes too much stress on others, forcing them to remember her, why not remove her from an earlier time, before the relationships were built, and avoid these difficulties? And why place them in the far past with their same names so that the present can easily find them through historical documents? For more complex flaws, we learn that the desperate people of the future are returning Maia and the four other kidnapped kids to an earlier time where they can help future humans survive their catastrophe, directly implying that they immediately witness the results of returning the 4400 to the present, which itself implies they can constantly tweak the timeline, adjusting any point in the past to accommodate the future events. Therefore why should we worry about any future catastrophe? I wonder also why return the entire 4400 members to the same moment in time? Would it be beneficial to send some even further depending on their roles? The implication in other episodes is that Tom Baldwin is the unifying factor, but I find this difficult to grasp since he is ordinary rather than übermensch. Baldwin is perhaps a good investigator and a good man, but his character and even judgement is generic, and there must be hundreds of other Baldwins out there who can be a unifying element.

Another moment in the two-part episode I found baffling was that mysterious glass of milk, the one linked to the false lobotomy. The fact that the kids can be taken to that sleep chamber for extraction makes me wonder why the complex scenario of creating a sister in order to kidnap then hole up and terrorize when simply placing them in that chamber is all our future counterparts needed to do? Future humans can extract people from any point in time, so why send one in commando-style? Why rely on the risks of a foot-soldier when an air strike is more dependable and accurate? It's these details that prove prime time television is not a thinking tool.

Yet the most blatant discrepancy is that if you remove five people from their timeline the series should really be called The 4395!

The enveloping idea is that the kids are being extracted from the present timeline because a great evil was let loose in that time, and the kids need to be sent further back to combat that evil. And another bit of idiocy sets in: in exchange for the children Tom must now destroy that evil, which turns out to be Isabelle. A great plot twist, certainly, but if it's that easy, and people from the future can return to physically interact with those of the present, why not simply bring in a more reliable Terminator to inject Isabelle? Why rely on the ordinary and unreliable Tom Baldwin?

There are some nice directorial touches. For instance the episode opens with the same photo of Diana beside a tree that Part 1 closes with, a photo that once included the now gone Maia. (Though I'm surprised no one comments on the fact that Diana keeps by her entrance a framed photo of herself beside a generic tree.) When Diana and Tom are in Nina Jarvis's (Samantha Ferris) office, the camera pans around the glass and we receive a glimpse of Marco (Richard Kahan) standing facing the door. Later he enters and we are left wondering if the character was waiting for an opportune time to interrupt, or if the actor had simply been placed there to wait for his cue. 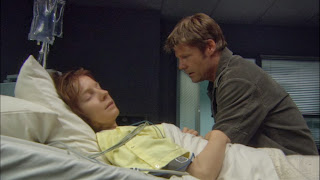 Much of the episode focuses on Diana losing the will to live after having lost the daughter she was not supposed to remember having. Her ties and relationship with Maia is a strong part of the series, and a positive outlook on adoption, particularly the unpopular adoption of older children. Diana wants to be with Maia so badly that she takes advantage of Alana's architectural gifts and locks herself up in a false reality with a false Maia, aware that the act is suicide. Rather than weaken the episode with potential sentimentality, I found this element worked well.

4400 Christopher Dubov's (disappeared 29 June 1999) only purpose in the episode is to aggravate the intense feelings of loss Diana is experiencing following Maia's extraction. Though the idea of smelling pheromones is pretty intriguing. But to what purpose? I ask. How can that help future earthlings to survive the impending catastrophe?

Shawn and Richard partner up in wake of their tensions, thanks to egging by Matthew. I question only Matthew's interest in the partnership since Shawn is likely more easy for him to manipulate than Richard. Like many actions and events of late, character motivation is often fuzzy. Isabelle is nonetheless in the picture, though Shawn tries to dump her: "I don't want this relationship to end. So it won't." A nice creepy touch. (Reminds me a couple of women I've dated.) 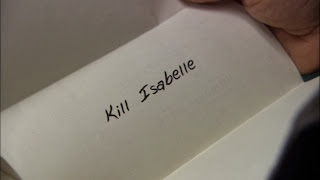 In short, "Gone" proved to be entertaining and even intense at times, but a little thinking can unravel the ultra loose time threads and plot points.