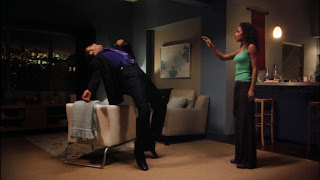 Previous episode: Being Tom Baldwin
Next episode: (you guessed it!) Gone (Part II)

For some other articles on film or television of the past, please visit Todd Mason's links on this week's Tuesday's Overlooked Films, etc.

The third episode of season three follows a triad of main threads: the disappearance of some 4400 children, including Maia, the escalating tensions at the 4400 Centre centering around Shawn, and Tom Baldwin's revealing insecurities in his relationship with Alana. Analysis will be limited since it's fair to see how these threads are resolved in Part 2.

A far superior episode to "Being Tom Baldwin," there are some potential flaws in the time travel aspects played upon here, and the direction of Part II might very well reveal some nonsensical elements. Some nice camera work, rotating shots to escalate tension and anxiety as well some good distance shots. There is good humour and a fine performance by Alice Krige as Maia's sister Sarah. Director Morgan Beggs has been an Assistant Director for film and television for over twenty years, and worked as AD on several episodes of The 4400 beginning with season two. He will return as Director in the final season for the episode "Ghost in the Machine" (4.11). "Gone" was written by third season Co-Executive Producer Bruce Miller, who penned several episodes of Eureka. 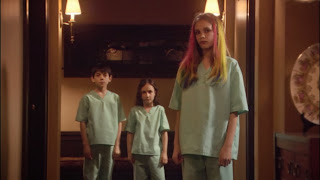 The main plot stream in "Gone" is the disappearance of Maia along with four other young 4400s. Creepily, Maia announces to mom Diana: "You will forget me," and while initially we are led to believe the forgetfulness is related to her kidnapping, we learn later that it is more literal. Indeed, the multiple twist ending here is quite strong and surprising. There is good humour thrown in with Diana quipping about missing teen Lindsey Hammond's on-screen photo: "Just once I wish a 4400 could smile for their picture," and later Marco discussing his study of Maia's journals: "I did find out how I was gonna die... Yeah, that was interesting. No, no, don't worry, it's actually kinda cool." A potential anachronism features Maia in her old 1946 bedroom listening to the wonderful Ella Fitzgerald singing Irving Berlin's "Cheek to Cheek," which I believe is her 1956 recording. (Please correct me if I'm wrong.)

There is brewing tension and conflict between arguably the show's two most morally conscious men: Richard and Shawn, as they are both being manipulated by the less than moral Matthew and Isabelle. Shawn is forced to fess up of his dealings with the Nova group when he learns how easily they can get to him. Yet more disconcerting is how dangerous Isabelle is, who is already closer to him than anyone else, as she exhibits her powers by levitating Matthew, so that actor Garret Dillahunt can practice for his future curled over hovering moment in that other time travel project, the entertaining Looper (see screen shot at top right). 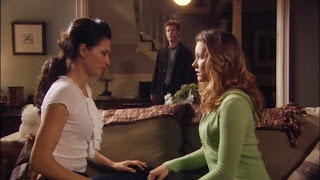 Finally, as Tom Baldwin feels more antagonized by members of the 4400, Alana is alternately becoming more tied to the centre. Heather Toby returns (the teacher from "Suffer the Children" 2.4) to inform us that Alana has been offered a teaching post at the centre, one in which she can utilize her gifts to help others. Tom's jealousy is interesting, a weakness from a tough guy main character. He walks in on Alana and Heather on the couch as they practice the former's holodeck abilities, while the latter, coming out of her trance, says: "That was incredible!" As though Tom had walked in on some other kind of intimate, yet naughtier, act. Appearances seem to indicate it is merely sharing her ability with others that he objects to, as though he is sharing her with others, though perhaps we will learn something new down the line? (Somehow I doubt it; Tom Baldwin is not that deep a character.) 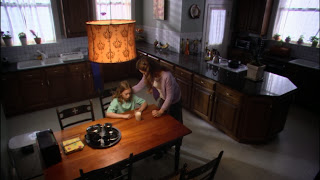 Posted by Casual Debris at 9:24 PM