Joyce Carol Oates, The Corn Maiden and Other Nightmares (2011)


The Corn Maiden at Goodreads 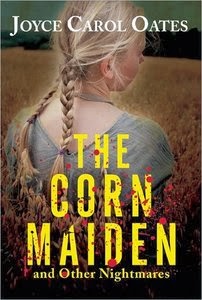 The Corn Maiden at IBList

I'm familiar only with Joyce Carol Oates's earlier short stories, and with the exception of the excellent "Family" (Omni, December 1989) and an early aborted attempt at The Mysteries of Winterthurn (aborted not because I did not like it, but because it was not what I was looking for at the time), have not read any of her work in some time. I was largely impressed with this collection, primarily by the incredible amount of energy displayed by long-time author Oates, who manages to read like an ambitious new author, taking stabs at making topical allusions and being aware of contemporary youth attitudes (though likely her researchers, should she have any, helped her in these regards). Or perhaps I'm being ageist.

There is a cold, calculated efficiency to her writing, making it feel at times clinical, yet it is well balanced by touches of humanity and sympathy, particularly when dealing with issues close to home, such as widowhood. The recent stories, dating back to 1996 though most published since 2010, come across as fresh, vibrant and filled with genuine suspense. The idea of "nightmares" (as per the subtitle) is not always evident, though there is consistently a sense of threat and desperation; in fact the desperation is so pronounced, from the intertwined characters amid a kidnapping in "The Corn Maiden" to the goody-goody twin in "Death-Cup" and the recent widow in "Helping Hands," that a more appropriate collective title might have been The Corn Maiden and Other Desperations.

Stories are consistent in tone and approach, and even varying elements or minor allusions are referred to in more than one story, from two stories (appropriately two) being about twins (though vastly different), to references to international crises and national economic difficulties. With its quieter tone and toned-down level of energy, "Helping Hands" stands out as being the stylistic oddball, though its quietness lends it a greater sense of desperation. "The Corn Maiden," though as intense as the bulk, shares multiple points of view (despite its limited third person approach), and is structurally divided into titled sections. The similarities, however, did not bother me one iota, and I felt an unintentional interwoven quality at the recurring elements which I quite enjoyed. The book, as a result, receives a sense of unity that is often lacking in single-author collections.

The Corn Maiden and Other Nightmares is a definite recommended read.


The Corn Maiden     7/10     (Transgressions 4, Ed McBain, editor, Forge Books, 2005)
Sociopath high schooler Judith "Jude" leads her cronies to kidnap a quiet, friendless Marissa on whom she'd like to perform the sacrificial ceremony of the corn maiden. The story is told through several points of view, indeed all points of view and experiences, from Jude, her collective followers, Marissa's mother, the implicated teacher Mikal Zallman. Only the Corn Maiden receives no voice. A powerful and completely engaging novella that manages to generate tension not only in whether the kidnapped girl will be rescued but also in the immediate lives and consequences on those closely affected by the incident. I particularly liked the mother's stream of consciousness as she tries to muster up the courage to phone 9-1-1.


Beersheba     6/10     (Ellery Queen's Mystery Magazine, October 2010)
Resentful diabetic Brad Shiftke receives a call from his estranged stepdaughter. Friendly at first, Shiftke soon realizes she is unstable and dangerous. The word "Beersheba" can refer to a number of events related to the city, and most likely to Elijah's refuge after Jezebel ordered that he be killed. The idea is possibly that Shiftke's former wife, also unstable, ordered (or trained) daughter Stacy Lynn to eliminate him, since daughter at least is convinced he was responsible for mother's death. It's Shiftke's ex-wife rather than Stacy Lynn who is here associated with the evil Jezebel. A good, tense story, though not as tight as the others in the collection, and though interesting, the characters are not as well delineated. I do like that we learn little of Shiftke and that his innocence in his ex's death is questionable, though I would have liked a little more emphasis on that particular point. Told in third person rather than first, there is no unreliable narrator, though the third person is limited to Shiftke.

The most ordinary of the stories in the collection, it is nonetheless well written and suits the overall mood of the book. Perhaps placed in the middle as a kind of intermission story would have worked better.


Nobody Knows My Name     7/10     (Twists of the Tale, Ellen Datlow, editor, New York: Dell Books, 1996)
Nine year-old Jessica is threatened by the affection bestowed on her new baby sister. Even at the summer cottage at Lake St. Cloud, previously a wonderful refuge for the family, the baby's needs and cries are overwhelming. It is only in the grey-haired cat that Jassica can find solace, as the feline appears to understand her predicament, and to know her name. A great psychological horror story, where a passive, unbalanced little girl finds her new reality suffocating. With the ending Oates manages to create a final image that is horribly tragic.


Fossil-Figures     7/10     (Stories, Neil Gaiman & Al Sarrantonio, editors, HarperCollins, June 2010)
Twins Edgar and Edward Waldman are distinct opposites. Edgar is the "demon" brother, wishing to suck the life from the other that shares the womb, resentful that there is even another when there should be only him. Edgar is born healthy and develops into a healthy and successful man, while frail Edward becomes a reclusive artist. Perhaps my favourite story of the collection, and evidence that Oates, despite her aggressive energy and not too likeable characters, can transform a tale of unsympathetic opposing twins into something quite touching.


Death-Cup     7/10     (Ellery Queen's Mystery Magazine, August 1997)
Another tale of opposite twins. Here it is Lyle, the simple book binder who resents the manipulative Alastar, the prodigal son who has obviously returned following a lengthy absence for some conniving plot centred around the passing of their wealthy, philanthropist uncle. Thinking it a duty to society, Lyle plans uncharacteristically to murder his brother with the wild death-cup mushroom.

Another effective tale, "Death-Cup" focused primarily on character. Automatically the reader sympathizes with Lyle, as Alastar is the obvious bad guy and the third person narration is limited to Lyle's point of view. Lyle is nonetheless not a terribly sympathetic character. He is too simple-minded and dull, and we can only wonder at his envy, as he focuses on his brothers birth advantages.


Helping Hands     7/10     (The Corn Maiden and Other Nightmares, New York: Mysterious Press, November 2011; Boulevard, Fall 2011)
Recent young widow Helene Haidt visits Helping Hands in Trenton, New Jersey, to drop off some of her late husband's clothes, and there meets Nicolas, veteran of a recent war in the Middle East. Grieving, alone and lost, Helene takes to Nicolas, hoping they can be friends.

There is less of the overtly horrific here, and the titular nightmare in "Helping Hands" is the unexpected abandonment of one's long-time spouse, something Oates herself suffered in 2008 following more than half a century of marriage. Helene is lost on many levels, in her finances, in a part of New Jersey she is unfamiliar with, among people with whom she is not used to sharing company, and in her own sense of self as her life was for many years associated with that of her husband's. She seeks companionship with a man from an entirely different world, from Trenton in contrast to her affluent Quaker Heights, whose experiences are nothing she can ever imagine, to the point that she convinces herself he is someone other than whom he obviously is. He is gruff and rude and self-interested, whereas she is overly sensitive and genuinely sympathetic. This need for companionship brings about a kind of tragedy we experience as greater than that of her husband's death, since as the reader we watch helplessly as she sets herself up for defeat. Oates succeeded tremendously in making me feel for this victimized woman. That desolate family room at the end reflects the barren desolation in Helene's life.

Helene's widowhood gives her a different point of a view, a completely skewed sense of reality. She sees not who Nicolas is, but projects upon him a personality and situation she would like to save him from. She believes he has been injured in battle, and though he appears to confirm this with descriptions of rehabilitation, her vision of a "damaged" person is a projection of her own damaged self. His scars might be evident, whereas hers are internal. She makes excuses for his behaviour and his station in life from a need for companionship alongside a naturally well-meaning and sensitive self. She is not naturally attracted to him, but subtly hopes for something to eventually develop, once he is no longer as damaged and has his life on the right track. She is attracted to an idea of Nicolas that she has herself defined, brought on by the belief that he is "damaged." His damage is more psychological than Helene is willing to admit, and Oates does well in never fully revealing his state.


A Hole in the Head     6/10     (Kenyon Review, Fall 2010)
Plastic surgeon Dr. Lucas Brede is puzzled that so many of his regular affluent New York patients are requesting that he perform on them the medieval operation of trepanning, which involves drilling some holes in one's skull. Shocked and offended, Brede adamantly refuses request after request, thinking that the world has gone mad. Yet as a result he is losing patients, and the period of national economic hardship forces him to eventually be convinced by a quieter client who swears to secrecy and offers the doc a large sum. He is horrified and anxious at the prospect of the operation, having encountered unresolved difficulties while a med student drilling skulls for routine procedures.

There is a shift in the tale from the existential and somewhat absurd to the tale of suspense. The suspense element leaves the incomplete plot unsatisfactory, thought the lack of a resolution works well with the existential elements. Similar in several ways to the previous story, "Helping Hands," as it deals with the affluent amid an international crisis, and how the effects of international crisis manages to seep into the otherwise isolated privileged world. Written (published, at least) not too far apart, an idea from one might have triggered the idea for the other, or perhaps Oates has been reflecting on international crises and the U.S. economy.

Posted by Casual Debris at 1:30 AM

Email ThisBlogThis!Share to TwitterShare to FacebookShare to Pinterest
Casual Labels: Corn Maiden and Other Nightmares The, Oates Joyce Carol