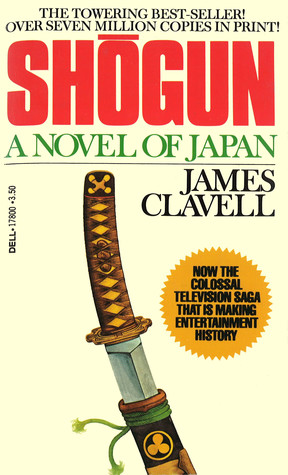 Like a feudal lord of old, Clavell manipulates this pawn of a book into the coffers of mainstream western society.

The historical romance that is Shogun, features English sailor John Blackthorn infiltrating the culture of imperial Japan, intermingling with the nation’s trade, religion, internal politics and international affairs. A kind of super man, Blackthorn is described as the greatest of sailors, able to commit to the complex internal politics of the country, alter its impression of western religion, and win the heart (and body) of its loveliest and most intelligent & respected interpreters. Seemingly, this sailor’s only fault is his temper, since even his ability to love (and the size of his “manhood”) is also described as unique. What grounds this character, other than the typhoon he encounters, is his ability to adapt to Japanese culture, and reject many of his former, European habits and thinking, which essentially tells us he is a mere mortal striving to become a better person. Clavell’s respect for eastern culture is evident, and we are reminded that this Englishman, though he is made samurai and does embrace Japanese customs, will always be lacking for his being European. The final sequence of Toranaga’s internal monologue proves this, as it turns out (no real spoiler here) that Blackthorn has always been a part of the plotting of Japan’s future landscape. He is essentially one among many instruments used by Toranaga in navigating the political landscape, and his destiny is pretty much settled by the Japanese lord even before the war of Crimson Sky takes place. The novel finishes with Toranaga, and the last vision of Blackthorn is him hopping away like an obedient puppy, clearly unaware of the scope of Toranaga's thinking.

Historically, Toranaga is based on Lord Tokugawa Ieyasu, who became the military leader (shogun) of Japan--a difficult feat, rarely achieved. This achievement was made possible not only through his political guile and military prowess, but by his being open to Japan's involvement in international affairs. At the time, Japan was sought out and visited by European nations, who were seeking religious converts and economic trade, and while most of Japan was reluctant to open up to the world, Lord Tokugawa used these outsiders to best position himself internally.

Similarly, Clavell uses the outsider John Blackthorn (based on British sailor Will Adams) to position his novel in the American marketplace. Japan was a nation steeped in mystery, and Clavell's exaggerated depiction of feudal Japan, largely through the eyes of the westerner, awakened interest of Japan in the general public. This, of course, was helped by the widely successful TV miniseries phenomenon of 1980, in which Clavell himself was very much involved. And so, like a feudal lord of old, Clavell manipulates this pawn of a book into the coffers of mainstream western society.

Certainly, like the scheming Toranaga, Clavell worked hard on attaining grandeur. Shogun was the ninth best-selling novel in the US of 1975, according to Publisher's Weekly, and the highest rated American miniseries of 1980, according to the Neilsen TV Ratings (it was the second highest rated miniseries at the time, following the 1977 production of Alex Hailey's Roots). The popularity of the miniseries no doubt helped Clavell's 1981 novel, Noble House, to attain the top spot on PW's list of best-selling novels of that year. Apparently, following the airing of the miniseries, Shogun's paperback reprint attained stratospheric sales at the time, though I don't have specific stats or sources.

Despite its mainstream popularity, I enjoyed the book immensely. It was engaging and highly entertaining, written in a straightforward and linear narrative, bogged down only occasionally by the political dealings as the reader tries to keep track of the impressive cast of characters. Sex and violence were piled throughout, which all added to the entertainment. Though a hefty book, it does little dragging.

The initial draft of Clavell's novel is reported to have been well over two thousand (about 2,300) pages. At 1,210 printed small font pages in its initial paperback print, I doubt that an uncut version will be released (yet in this age of re-visiting the past for profit, it is improbable without being impossible). It is difficult not to discuss the novel without mentioning its length, as length alone has become as embedded in the novel as its setting or main characters. This single book has more printed words of fiction than the entire printed oeuvre of the likes of J.D. Salinger. And yet, the length is only daunting in appearance and not in fact, as the work is nonetheless a quick read. Therefore, I cannot pride myself in reading these twelve hundred-plus yellowed pages of small print, a copy of the 1976 paperback so used before I even opened it up that it quickly lost its cover, since many smaller books have proven to be a far greater time commitment.

Posted by Casual Debris at 3:29 PM

"Despite its mainstream popularity, I enjoyed the book immensely."

I hope you were joking with that line.