Mark Haddon, The Curious Incident of the Dog in the Night-Time (2003) 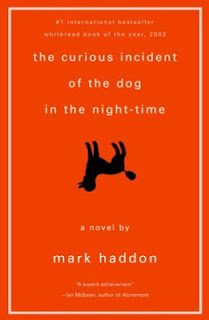 
A popular book when released, The Curious Incident of the Dog in the Night-Time appears to receive an extremist range of reactions, from those lauding its emotional power and sensitivity, to those declaring it to be trite, dry and emotionally manipulative. My response it completely middle ground, and what I found problematic had little to do with its actual subject matter.

While I did enjoy the novel overall, it is strictly mainstream and appealing to a general public. Haddon does well with his portrayal of how a boy with Asperger's Syndrome experiences the world around him, though I've been pointed to other, "better" and "more accurate" works on the subject. The humour, character portrayals and tensions are real enough and believable enough, and I did like the narrow-minded interests that narrator Christopher Boone is filling his manuscript with (by "narrow-minded" I simply mean that he sticks to topics that interest him, as a boy with his condition would). 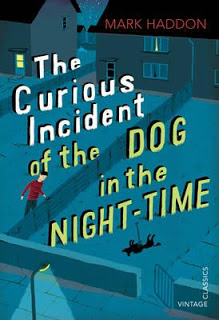 Unfortunately one of the most appealing aspects of the work as a novel of fiction is deceiving. Essentially, the story sets itself up to be an unconventional murder mystery (Who killed the neighbour dog Wellington?), when in reality it is not a murder mystery at all. The novel fails as a mystery in that its early focus only pretends to be the mystery and Christopher's investigation of it, when it's clearly a trope to later build upon family drama, the real focus of the novel. Now there is nothing wrong with family drama; this is not the issue, but there is something wrong with making a book into something other than what it initially pretends to be. Christopher (Haddon, really) consciously focuses on classic mystery conventions, deconstructs Sir Arthur Conan Doyle's The Hound of the Baskervilles and even contrasts itself to that classic tale. Baskervilles is a murder mystery involving a dog and set in the Devonshire moors, and collects a group of interesting neighbours as suspects, some with startling family secrets. Night-Time spends nearly its first half as a murder mystery collecting a group of neighbours as suspects, including one with a startling family secret. Yet Night-Time's murderer is obvious early on, and the book diverges to become part family drama and part young adult runaway tale. To emphasis the idea that Night-Time is a play on the classic murder mystery, it was given that excellent title. I sincerely like the attempt that Haddon made in using classic mystery conventions to build his story, but I am less than impressed that the concept is applied heavily at the outset, only be entirely dropped. Though the mystery is somewhat built around Doyle's Baskervilles, it is lacking in a concise resolution. The murderer confesses (by this time the reader has figured out the identity of the murderer), and yet not in any way as a kind of parody or examination of the convention. At that point the novel is no longer interested in its own premise, and I am left to wonder if I too should be so disinterested. 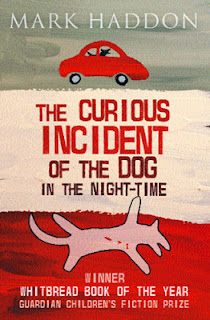 I like mixing genres but not when there is pretense. I have the impression that Haddon emphasized the murder mystery elements in order to grasp the interest of potential readers, and what I ended up hoping for was an unconventional mystery, a murder mystery that plays with convention but is really dealing with something entirely different (Alain Robbe Grillet's The Erasers comes to mind) yet what I receive is a half mystery, soon forgotten and entirely unsatisfying.

The teenage runaway sequence is itself a runaway sequence, dragging on for too long. Later Christopher says there is no need for such detail, and I wonder he didn't realize that a little earlier. The family drama element works because the characters are completely imperfect, not terribly likeable but not unliked, and it does not overstay its welcome. There are just enough pages to make it interesting, and the lack of total resolution was a great choice on the author's part.

Though I am being critical of the novel I enjoyed it quite a bit. The lagging in the middle is truly unfortunate, and concepts of mystery fiction and the unconventional mystery are my own and need not trouble other readers.

Posted by Casual Debris at 1:04 PM

Email ThisBlogThis!Share to TwitterShare to FacebookShare to Pinterest
Casual Labels: Curious Incident of the Dog in the Night-Time the, Haddon Mark