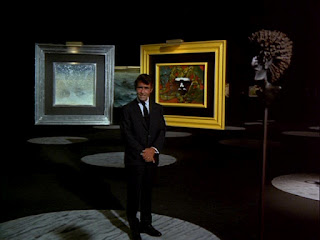 It appears to be a requisite for anthology series to include at least one episode featuring a witch and one featuring a devil. Night Gallery meets those two requisites in this single episode. Perhaps it's because the setting for both stories is familiar, the episode was overall quite disappointing. It is also the first episode of season two that features no teleplays either written or adapted by Rod Serling.

Thankfully this episode has only a single comedic sketch, but one is plenty since it's downright awful, and features yet another embarrassing moment in the career of Adam West.

Notable in Serling's introduction is that he refers to himself as "an undernourished Alfred Hitchcock." 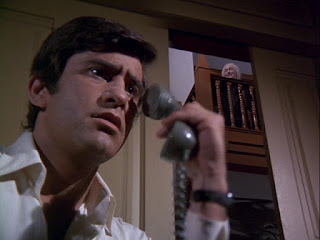 This witchin' tale with the cozy title is a standard story of a centuries-old witch who, in the guise of one Aunt Ada, is attempting to take over the body of her young niece Joanna Lowell in order to maintain her longevity. Husband Craig senses some kind of evil plot from the start, and investigates this Ada person. Though he's a staunch disbeliever without the proper social graces to even feign interest in colleague Nicholas Porteus's studies of the occult, he quickly learns to believe in witchcraft. Only problem is, his flaky wife just dotes on the old hag.

Standard fare indeed, but it is well pieced together and manages to be entertaining. Sure there is some silliness with those flowers and the spells and pentagrams, but the sets are nice as is the 1970s tv quality cinematography with some nice framing and camera angles. Witch sounds seem to be borrowed from Doctor Who which transforms drama into comedy, and that multiplicity sequence comes across as a bit of a joke rather than a form of dramatic tension. Helping to rescue the episode is none other than Jeanette Nolan in the role of the Aunt Ada imposter, who is simultaneously charming and yet clearly a witch. 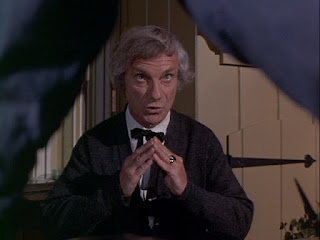 The ending, which I won't and don't need to reveal, is obvious from the start. Whether the witch succeeds or not, however, can go either way, but by then we stop caring. One problem is the role of niece Joanna Lowell, who is so simple and agreeable while not believing a word of husband Craig's outlandish accusations. Simple-headed indeed, she is written as a trope rather than a character, and though not actress Michele Lee's fault, she is quite annoying. James Farentino as Craig Lowell, who pieces together what this witchy woman wants, is pretty good, even though he spends much of the segment dripping with water, whether it be sweat or rain. Convenient isn't it how every day is a gorgeous example of summer in the suburbs, but that one day when the witch's plans are to come to fruition we are inundated with torrential showers. Moreover, the fact that a university physics class is held at midnight is just a little hard to accept, for of course that is the witching hour and television must conform to the wants of their spells. 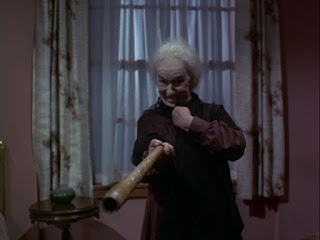 The wonderful Jeanette Nolan has appeared in countless projects in both film and television, and her roles in anthology series include many 1950s dramas, as well as four episodes of Alfred Hitchcock Presents, two for the original The Twilight Zone, and one each for Naked City and Climax! She was also the wonderful Miss Wattle in Night Gallery's first episode segment "The Housekeeper." Moreover, she was the voice of Norman Bate's mother in the fabulous Psycho. James Farentino has also had a long enduring career, including two appearances on The Alfred Hitchcock Hour and one on Naked City. He will reappear in a season three episode of Night Gallery, "The Girl with the Hungry Eyes." Michele Lee is best known for her role in Knots Landing, while Jonathan Harris who plays Lowell's helpful occultist colleague is best known for the series Lost in Space and The Third Man, and has also appeared in two episodes of The Twilight Zone. 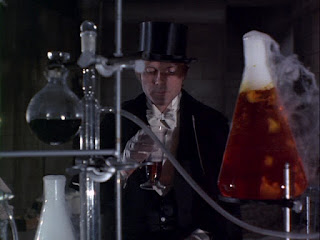 Another terrible sketch brought to you by the pen of show's producer Jack Laird. Having already pillaged the works of Bram Stoker, Gaston Leroux and Edgar Allen Poe, he is now ransacking the oeuvre of Robert Louis Stevenson. A well-dressed man (could this be Dr. Jekyll?) is tasting a potion while a shrunken and filthy man named Igor watches on. The good doctor makes faces, growls a bit, then looking really angry and slightly deformed, complains about the amount of vermouth. The End.

Not only is the skit not funny, former Bruce Wayne and Batman actor Adam West is pretty bad, as is everything else about the two minute interlude. It makes no sense that there is another person mixing Jekyll's potion since he always worked alone, and naming the little helper Igor, that generic name for a mad scientist's aide, comes across as lacking invention. "Apologies to Mr. Hyde" indeed, and apologies to Mr. Serling, Mr. Stevenson, and everyone in the audience. 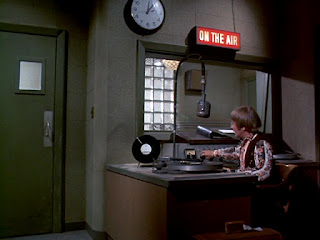 The Flip Side of Satan
Directed by Jerrold Freedman
Written by Malcolm Marmorstein and Gerald Sanford, from a story by Hal Dresner
Starring Arte Johnson

Sleazy disc jockey J. J. Wilson arrives at an isolated broadcast station for a new gig. Too hip for 1971, Wilson is puzzled by the funeral-like music he is forced to play, and by the fact that this station broadcasts only from midnight to six in the morning. In the studio he makes some calls and we learn he is a sleaze, which is not surprising. Indeed the situation is much too clear to the viewer within minutes: he is broadcasting from hell. Being an amoral dude as well as a disc jockey, you know.

Unexciting and not too creative. It also doesn't make sense that when Wilson arrives at the station it is broad daylight, yet he tells us minutes later that it's midnight. Tales from the Darkside did a better, similar effort with the episode "The Devil's Advocate" (episode 2.7) with Jerry Stiller. Comedian Arte Johnson is fine in the role of J. J. Wilson; it's the lack of creativity that drags this one down. Johnson has also appeared in both The Twilight Zone and Alfred Hitchcock Presents. 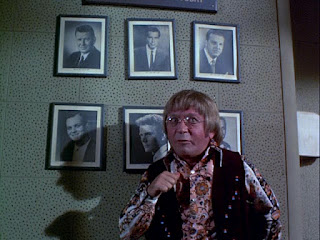 ... James Farentino and Michele Lee were married in real life at the time they made this Gallery appearance.


Oh, and "shrunken and filthy" Igor?
That was Jack Laird himself, showing that he had faith in his own dumb gags (even if no one else did).

Thanks for the great additional trivia. It seems Night Gallery often recruited friends & relations for their projects.