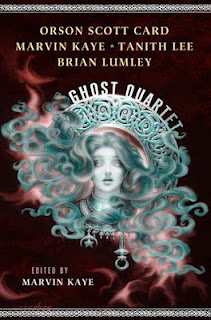 
The Ghost Quartet is latter part of a series of novella or longer short fiction anthologies that include The Vampire Sextet and The Dragon Quintet edited by Marvin Kaye and published by the Science Fiction Book Club and Tor Books. The anthology was not very well received, and copies quickly made their way to bargain bins and discount shelves (which is where i found mine). Having read it through I pretty much join the general consensus that the collection is forgettable, with the notable exception of Orson Scott Card's contribution.

The Place of Waiting by Brian Lumley. 4/10

The publication of "The Place of Waiting" marks Brian Lumley's fortieth year in publishing genre fiction. He's produced all forms of fiction, from novels, series to many stories for the Cthulhu Mythos, as well as poetry. For a list of his publications, visit the ISFdb. Like any veteran author he has produced good fiction, adequate fiction and not so good fiction. Despite being included in Stephen Jones's The Mammoth Book of Best New Horror 20, "The Place of Waiting," in my opinion, is not among his more memorable efforts.

The story is told through the point of view of Paul Stanard, a recently divorced painter who has even more recently lost his painter mother. He is at a crossroads, unfocused and vulnerable, and easily the target of phantom spirits. The vulnerable grieving loner is the perfect character to be unduly influenced by any sort of spiritual force.

In the misty moors Stanard is attempting to paint a piece of rock called the Tumble Tor, and while waiting meets three characters, one friendly and another babbling, and the third he sees upon Tumble Tor, a strange and nasty-looking figure. Which are of these are ghosts and what do they want with him? Can we figure out what's going on amid Old Joe's gibberish and those nightmares Stanard is experiencing night after night? Of course we can, and not because we're particularly smart, but rather because the mystery is a little too familiar. Lumley offers us a ghost tale featuring many of the classic supernatural tropes. The narrative is replete with haunted dreams, strange gibbering characters, and even squeezes in an unnecessary love plot, so incidental I'd term it a sub-sub-love-plot. And all this is handed over to us in some flat prose. The problem with the prose is that it's over-articulate and dry, lacking the desperation and anguish which Stanard must be feeling. It reads as though it were told by a man in a cozy chair with a lighted pipe sharing a long-winded tale he once heard, rather than by someone in the thick of the excitement. Moreover, frightening characters are less than frightening, and dialogue such as "I don't understand!" // "Ah! But you will understand!" along with a ghossst who ssspeaksss in hisssesss are more comical than tense.

As for the anticlimactic ending... well, Lumley has written better stories.

[Spoilers; difficult to avoid them with this one.]

I have no intention in entering the controversy dispute as it is exaggerated and ridiculous. Besides, like much silliness it's been over-discussed in the web community. If you're interested in the controversy Google can help you better than Casual Debris. The idea is (and here's the spoiler for you) that the story is homophobic because Hamlet's father is a pedophile. Honestly, it's the accusation that is homophobic as it assumes that Hamlet's father is homosexual on the basis that he is a pedophile. The story is not concerned with any kind of sexuality, nor even with pedophilia, but is concerned largely with Hamlet's misconceptions of the world around him, and the dangers within that misconception, which is one of its strongest links to Shakespeare's play. Both works deal with existential, with a man's attempt to locate his place in the world, a world which has suddenly been flipped upside down.

So much for the preamble.

"Hamlet's Father" is a well-written re-telling of Shakespeare's excellent play. I admire Shakespeare, have read much of his work and have encountered all form of adaptations and interpretations, some better than others. Prince Hamlet is among Shakespeare's most interesting characters, and Card does a great job in his portrayal, as well as in his approach to many of the play's sequences. The does well in capturing the gloomy mood at Elsinore and also in settling on a great level of language that bridges bard and the modern mainstream reader. Wisely, not every detail is included (there are so many), so we don't learn about the death of Rosencrantz and Guildenstern. Since this is prose, the ideas delivered to the audience through soliloquies are captured in thought.

My favourite aspect of Card's re-telling is Hamlet's characterization. Renowned for being introspective yet much too cautionary, Card brings these traits to the fore, and Hamlet comes across as less than a heroic figure. He is not likeable in this version, yet he is nonetheless fascinating. As for the tragedy, the ending on "Hamlet's Father" is utterly tragic, horrific even, as in death the conniving king manages to trap his conflicted son under truly horrible circumstances.

In an Edinburgh pub a group called the Jamesians gathers once a month to tell ghost stories. On this particular night the four regular members are joined by a British couple and a man from Connecticut named Hugh, who tells of the haunted single malt.

The story is entertaining enough, but perhaps a little too long for what it is, though it is the shortest piece among the group. Structurally it is broken up into narratives featuring the minor ghost stories, each one very much what you'd expect a tourist to be treated to. Nothing gory or too horrifying. There is a narrator holding it all together, and an overarching tale involving Hugh and the single malt from Connecticut. The story's weakness lies in the narrator, "Doc," who is a little overly talkative and a know-it-all of the annoying rather than the interesting kind, which gets in the way of the novella's supernatural narratives. Unfortunately there are no remarkable ghost stories here, nothing to awe or make one shiver, and the single malt comes across a little anti-climactic. Not a bad story, but very average and imminently forgettable.

I'm not familiar with August Strindberg's play, and can only analyze Lee's interpretation/re-telling (whatever it is) as though it were its own single unit.

When young Blya Sovinen is on the verge of committing suicide, a group of strangers come to his rescue. They take the beautiful young man to a tenement building, and keep him trapped there, though they treat him well. The building is a kind of co-op, and the hundred or so inhabitants share the space with a three hundred year-old ghost. This spirit was once a slave girl who fell under the spell of a magician named Nezchai who was captivated by her incredible beauty. When she died at the age of twenty-five he preserved her body and managed to keep her spirit alive. The people in the tenement remain in order to give the fading ghost more life, and need Blya and his beauty for the same.

This story is normally considered the weakest of the quartet, evidently incomprehensible and dull. I actually found the first part riveting and fascinating, but unfortunately the second part, which tells of the experiences of the slave girl, sometimes called The Swan, other times Webbed, is overly long and far less interesting. The first part is filled with mystery and gloom on par with the castle in Elsinore, with interesting characters and a situation reminiscent of modern Eastern European writing. It is a real shame Lee chose to veer the narrative along a divergent path, as I was more interested in the living and the culture they established around the ghost than the ghost itself.

Posted by Casual Debris at 2:13 AM