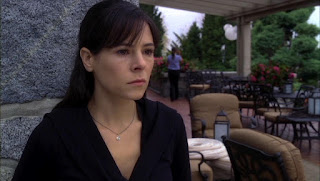 You'd think with a triple-word title that "Thrack, Splat, Sizzle" there'd be at least three bodies, but it turns out the title is the most exciting portion of this somewhat lackluster episode.

The wedding party is getting ready to return to the mainland, the sheriff interviews suspects, J.D. runs and runs, and Malcolm can't figure out what to do about the money. The lack of energy is partly a result of some poor writing, particularly during the sheriff's interrogations and the laughable flashback scenes of Abby, Jimmy and the seven year-old Wakefield murders. The Abby and Trish bonding is sappy and also devoid of oomph. J.D.'s running has become such a trademark for the show that it's almost comical, which leaves us with Malcolm's money troubles the only entertaining subplot of episode seven. 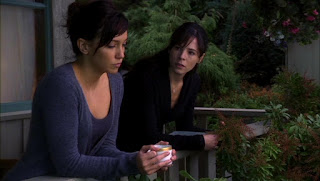 I will begin with the flashback scenes. We learn a few things: Abby saw the killer hacking somebody and was nearly caught when Jimmy showed up, saving her life. Jimmy should know who the killer was but, as expected the face was hidden from us viewers. Seems like Jimmy may have falsely accused Wakefield since he should have been able to recognize them later. Maybe Abby repressed some memory and it was Jimmy she saw doing the killings. (Yes, I still think Jimmy's our killer.) We learn also that Charlie turned to the bottle and some nastily crafted phrases, along with exiling Abby, which is the cause of her resentment. We also discover that a thirty year-old shouldn't be playing a seventeen year-old, despite her youthful looks. Abby is certainly nice to look at, and Elaine Cassidy is the best thing about Harper's Island, but she isn't seventeen. Moreover, the glaringly over-exposed filming for the flashbacks (because the past is so much brighter?) is painful to watch. The combination of a thirty year-old high schooler and this awful lighting made me wonder if the sequences were supposed to be spoofs. 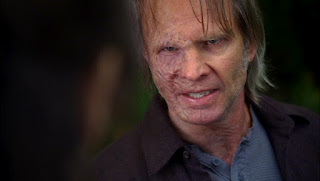 We also learn that the man with the burned face, the guy who unleashed those dogs and set up at least some of the island traps, is a victim of a Wakefield fire on the docks. He is also not a friend of Charlie Mills, telling Abby he is a liar. Moreover we discover that Wakefiled used to stalk Abby's mom, and that Charlie sent him away for seventeen years on some trumped up charges, so daddy is feeling a wee bit guilty.

Guilty enough to be pursuing J.D.? See J.D. persecuted. See J.D. run. See the ignorant characters perpetuating stereotypes. There's been so much focus on J.D.'s tattoos, obsession with death and other goth-like elements that the characters, from Sheriff Charlie Mills to J.D.'s own brother Henry, are holding these against them. I never care when television, such an impressionable medium, perpetuates such opinions. I'm hoping J.D. gets some redemption, though I'm pretty sure he'll be on the chopping block. 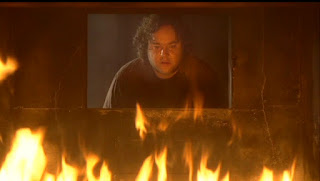 Finally we have the only entertaining portion of the episode: Malcolm and the Money. It's almost amusing though not very suspenseful to watch Malcolm trying to hide the loot. The police are searching rooms so he's rushing up to pack the money away and, with a knock at the door he drops it out of the window. Turns out it's only expendable bridesmaid Beth Barrington (Amber Borycki) who's just dropping in to thank Malcolm for his kindness the previous day. Seems she might have a crush on him, whereas Malcolm is thinking only of the dough. The subplot ends with Malcolm, having been found out by best man Sully and expendable groomsman token black dude Danny Brooks (Brandon Jay McLaren), burning up the money in the hotel incinerator. Why burn the cash? I have no idea since he's fessed up and evidently no need to destroy evidence. I suppose since the writers figured an incinerator was still lacking in the script. Malcolm gets pulled off-screen and chopped up. (In the DVD extras the scene is expanded to show body parts being tossed into the incinerator. Good thing these scenes were excluded since the cgi is pretty poor.) I suppose this was the "Sizzle" from the title, which just leaves me wondering about the "Thrack" and the "Splat."

The episode ending and twist is also good, with little girl Madison receiving a mysterious note and disappearing into a room where, evidently, someone is waiting for her. Final shot is of the door closing with a ghostly hand. (Ok, there's no ghostly hand, but it does close on its own.)

This episode also gets an additional screen shot, this time of Abby on her way to see Trish and doing her best to put on a smile. No particular reason, only that Elaine Cassidy is nice to look at. 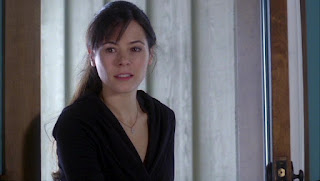 Posted by Casual Debris at 1:35 PM