The 4400: The New and Improved Carl Morrissey

The first episode of The 4400 solidifies the series convention: we discover more about our main cast while their stories are interspersed with a subplot unique to the particular episode. There doesn't seem to be an overarching thematic link between the separate threads, though the unique stories do shed a bit of light on the mystery of the 4400 and their special abilities. 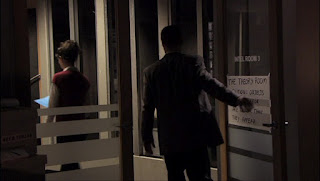 We are also introduced to the Theory Room, a concept that actually made me laugh: "It's a theory," says agent Diana Skouris to partner Tom Baldwin. "That's why they call it The Theory Room." And sure enough, as they exit we see the scrawled sign on the glass door designating it THE THEORY ROOM, in case we had any doubts. The theory they've been expounding is that the 4400 were returned for a specific purpose, and while their own actions may not be directly relevant to their purpose, the "ripple effects" are indicative of something potentially greater. What has led them to this theory is that the man Orson Bailey inadvertently killed in the Pilot episode was involved in dealings that were on the verge of generating economic chaos. Interesting.

We discover little else of the main characters, except that Lily's talent has surfaced and as expected it appears to be linked to the baby she is carrying. She describes it as knowing what the baby is thinking. Some sort of heightened maternal instinct. Interesting. 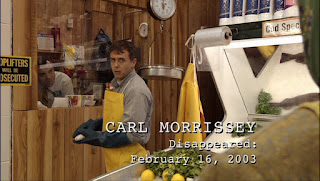 The episode's featured one-off subplot is less than interesting. While our heroes listen to babies, discuss divorce, wait for the comatose to awaken and theorize, something is astir in little Brooklyn. (Really it's Seattle, I think. Only it should be Brooklyn, what with the accents, vigilantism and reference to the great Charles Bronson.) Grocery clerk at the fish aisle, Carl Morrissey (David Eigenberg), disappeared a little over a year ago, back in 2003, and was hence able to pick up where his life left off. He's happily married to wife Gracie (Kathleen Wilhoite) and living in his childhood neighbourhood, where he knows everybody and everyone knows him. Unfortunately the neighbourhood's been on the downswing, with violence taking over the local park and graffiti appearing everywhere. It just isn't safe anymore. Naive and idealistic, Morrissey believes he can restore the neighbourhood to what it once was, and this belief is brought on by his new ability, which is incredible strength and dexterity. "This is what I was meant to do!" he spouts at his worried wife. "This is my destiny!" Poor Morrissey is killed, but as the police are removing the yellow tape, community members amid cheesy music begin scrubbing the graffiti from the park's stone monument.

The story is familiar and rendered dull. There is no investment in character or attempt at making the familiar interesting. It also doesn't help that David Eigenberg is a little sloppy in the role. A wavering accent, inconsistent energy and a certain dumb look are all distracting. As is the paint-by-numbers script. Not to mention that hilarious scene when Carl twists his boss's hand when he seems to be getting a little power hungry (a character element that is not followed through). The purpose here is to progress plot and progress The 4400 mythos by tossing in a few bits of necessary information. 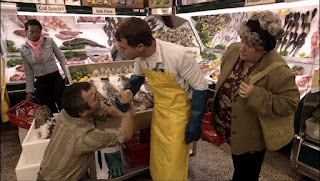 And we do learn a bit about the abductions through Morrissey, so that his purpose moves beyond the neighbourhood setting, and potentially out into the vast universe. The story reveals that the returnees are not invulnerable, and since Morrissey's death brought a community together, it adds padding to the ripple effect theory. With actual rippling, Morrissey's death should result in the series being re-titled: The 4399.

Finally, I'm anticipating that final episode, when they learn what the abductions were all about, and reveal it to the viewer in THE EXPLANATION ROOM. In the meantime thank you for reading, and as it's late I'll be popping over to THE SLEEPING ROOM. As the sign on the door designates.

I saw this pilot and a few episodes I think but something must have happened because I don't remember much after it.

I don't know too much about the show. It seems to have a strong following, an active website & it did survive four seasons. I've tried doing some research but articles I've found are series overviews & contain spoilers; I'd rather just watch & allow myself to get surprised (or not).