(Once again, some spoilers.) 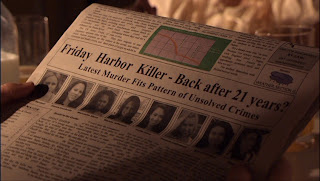 "The time I lost is gone. I'll never get it back. But my years in the dark didn't kill me and my work remains. And even though I might not understand what's happening to me, I have faith in the final outcome."

This creepy opening, spelled out in both block letters and voice-over narration, opens up what will likely prove to be the strongest first season episode. The episode works as it not only features an excellent subplot, but it introduces a mysterious regular character, and heightens tensions within the other subplots. 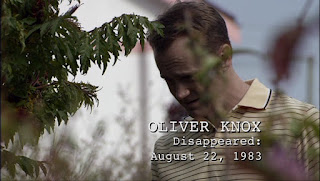 The episode's one-off deals with the possibility of a serial killer having been among the 4400. The killings of young women in Friday Harbor ended back in 1983, just when Oliver Knox disappeared. Now that Knox has returned, so has the killing. "I know how tempting the math is on this murder," Knox (Lee Tergesen) tells interviewing agents Skouris and Baldwin, maintaining he is not, and never was the Friday Harbor Killer. Soon afterwards, a written confession to all the Friday Harbor murders as well as hard evidence links someone else to the crime. Yet another body appears, followed by another man confessing to all these crimes. Certainly Knox is guilty, but how is he managing to get others to confess? Reminiscent of the popular X-Files episode "The Pusher."

Actor Tergesen is best known for his excellent performance as the naive prisoner Tobias Beecher in the fantastic series Oz, and does a great job here as the merciless, conscience-lacking Knox. Despite his arrogance he is charming, friendly and easily likeable. This of course adds to his creepiness, and Tergesen does well with the creepy. He is also recognizable for roles in Desperate Housewives and Weird Science.

Yet the episode is not content to limit itself to a strong subplot, and seems to be complicating the series with additional foggy elements. Beginning with the introduction of Jordan Collier (Billy Campbell). 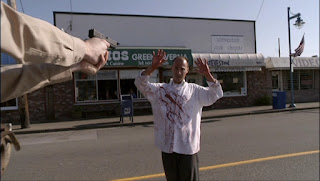 Collier first appears on a television screen in Skouris's apartment as part of the Barbara Yates Show, volunteering himself as the face to the 4400. A wealthy and successful real estate developer, Collier disappeared in 2002 and yet has been re-appointed by his company's board. He is acting not only as "the face" of the 4400, but is helping out particular members as well, hosting a gathering and inviting any member who wishes to attend. He seems particularly interested in Richard and Lily, even offering the former a job as head of security when no one else considers him employable.

Introducing Jordan Collier in an episode alongside Oliver Knox is ingenious. Both men are charming, naturally flirtatious and well-spoken. Knox is physically bright, blonde and smiling, while Collier is dark and brooding. The greatest contrast is in their roles. While Knox is a cold killer, merrily taking lives with his unusual new talent, Collier is a kind of saviour. He appears genuine in his aid to "returnees," a kind of Jesus Christ figure (as his initials suggest) attempting to unite a lost flock. It is likely there is an ulterior motive, a combination of good and evil. Friendly to the 4400, but not necessarily to others. Or vice versa. Personally, I'm getting a feeling of cultishness from JC. 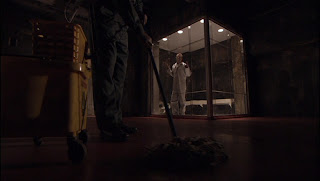 To add additional complications to the mounting tensions, popular television personality Barbara Yates is taking on the 4400, arguing they are a threat and should be returned to quarantine. Evidently she has a history with Seattle's Office of National Security, particularly its chief man Dennis Ryland, who is planning for a counter-attack. Pseudo journalist Yates is here played by Helen Shaver, who directed the series second episode. The character appeared briefly in the pilot, as Orson and Maia watched her show while in quarantine, though was played by Patti Allan. (I remember Shaver well in her role as Dr. Kress's wife, Cathy Kress, in the excellent pilot episode of The Outer Limits, "Sandkings," based on the also excellent short story by George R. R. Martin that featured no Mrs. Kress.) Nice to see some early plot planning by the creators.

Another effective contrast is that in an episode that features so much death, we also receive a wakening with Kyle Baldwin coming out of his coma. Secrets about his accident and Shawn's abduction are surprising, since it turns out Kyle was the intended abductee. This implies much, including that the abductors are fallible, and opens up the possibility that they could have made other errors, such as the abduction of a serial killer. Hopefully the series will toy around with these possibilities, the writers hopefully aware of the multitude of potential. 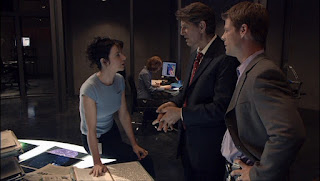 And amid all these tensions the episode still manages to push the notion of the ripple effect introduced in the previous episode's Theory Room. "The incidents themselves are just catalysts for change," Diana Skouris says. Yet we can all wonder, as the agents do, what kind of positive change the recent victims of the Friday Harbor Killer ripple into?

Though the show continues to lack great writing, it has managed here to create its own agreeable mythology. Setting down so many players, generating great contrast and promising mystery and perhaps even moral challenges, episode three knock number two aside and is better linked with the promising pilot.