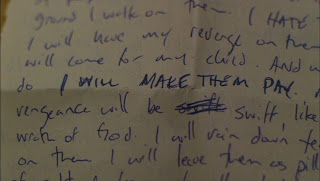 For the previous episode, please "Gurgle."
For the following one, please wait.

Not much unity in episode nine, as we're focusing on Abby's paternity and Shane's idiocy. Two deaths, yet neither are spectacular. Some tunnels and perfectly applied make-up. 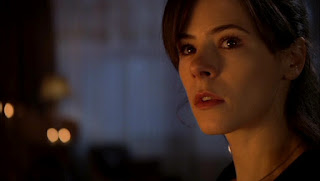 Now that the writers are focusing on the possibility that Charlie Mills might not be Abby's father, and she might instead be Abby Wakefield, I don't buy it anymore despite my suspicions during episode eight. Wakefield, however, did have a child with Abby's mom, so Abby's half sibling, and I suspect Jimmy. First of all, his name is too nice, like Tommy or Billy, which could be a ruse to throw us off. His parentage is mysteriously kept out of the story, and he's mobile, knows the island well, knows boats and fish, how to use knives and harpoons. I'm also thinking also of the incestuous possibilities between he and Abby. They both have dark hair. The similarities are seemingly endless. 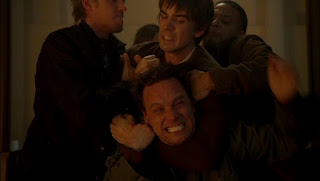 This episode's first death (Beth) differs from others in that we don't see her die, and the group realizes she's missing before we do. (This doesn't mean much since she's nearly a non-character.) Her death leads our people to discover an underground series of tunnels built during prohibition that our killer obviously uses getting from area to area. Like our motley crew of expendables, these tunnels also appear a little too neat and clean. Evidently Wakefield has already disposed of all the island rats. It's also sociologically fascinating that these women, under the stress of being hunted down, continue to ensure that their lipstick is freshly applied.

Aside from the death the episode's central tension is our heroic gang growing a little stir crazy, especially as Shane eggs them on. He'll likely be around for a couple more episodes just to generate anger and mischief. If we're following expected convention he'll make one heroic leap just before his demise.

There's more silliness abounding in Harper's Island. When Abby is leading Madison up from the tunnels, Madison looks up from the sewer grate and says she sees lights, must be a car. The camera is then above ground, panning from the sewer up the road where eventually Shane's truck appears. There's no way Madison could've seen the light from there, or recognize it. Sticking her little hand up through grate, Shea sees it in the rear view mirror, another unlikely event. The convenience here is jut too much, and the truck's appearance at the nick of time is also too much, since I'm using the phrase "nick of time" too frequently when describing series events.

The second death is that of Katherine Wellington (Claudette Mink). Not spectacular but a little surprising. I do like the fact that the show will eliminate key players such as J.D. while keeping seemingly expendable ones for a while, such as Danny. We're also down to an even number of bridesmaids and groomsmen, with two apiece. As for Katherine, I had predicted she was Trish's betrayer/saviour as per the medium, but while she did some naughty betraying she hasn't come around to any saving.

The title of this weaker entry seems to be missing an "L." The ending is good though, with Madison telling Abby it was her dad who kidnapped her, yet it had better pay off. 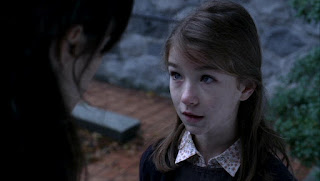