Arthur, Robert, "The Aggravation of Elmer" 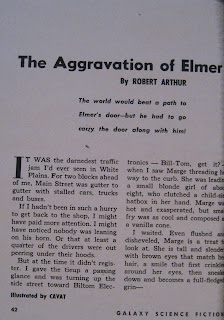 Yet Robert Arthur was actually quite a prolific genre short story writer. While he write mysteries and science fiction shorts, his works were primarily fantastic in nature, involving witches, ghosts, genies and inexplicable scientific inventions. His stories are generally short and humourous in tone, and have often been reprinted in fantastic anthologies for younger readers, including many of his own for Random House. Since he was so prolific and since only two full-fledged Robert Arthur collections were ever published (Ghosts and More Ghosts in 1963, and Mystery and More Mystery in 1966), many of his stories have never been reprinted, and this includes his 1955 science fiction comedy "The Aggravation of Elmer." 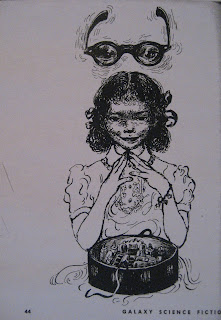 On a hot day amid unbelievable traffic Bill takes his wife Marge and their neighbours' daughter Doreen to his electronics shop, which is thankfully air-conditioned. And where Bill can watch the first ever baseball game televised in colour ("the Giants versus the Dodgers"). Doreen carries with her a hatbox, claiming that inside it is "an unhappy genie." It turns out that Doreen's thirteen year-old cousin from South America is a fantastic inventor, having built for himself a colour television set larger than Bill's. Moreover, Elmer believes grown-ups are stupid and that "silly-zation" is doomed.

The story is overall quite enjoyable, and while genre humour of the 1950s is more often irritating than actually humourous, it works well here. The play on words and particularly Bill's unsympathetic attitude make for a good read: "I gave [Doreen] a foolish grin. I wanted Marge to get the idea I was really a family man at heart." The ending is a play on words with the title, and is unpredictable. What makes the story work well is that the setting and situations are all linked closely with the main idea, unlike with "Killerbot!" (the article I posted earlier this morning).

The illustration is by CAVAT, and I find Doreen is a little too devilish for the purely innocent character that she is. Perhaps this is just as Bill sees her?

Ah, I think you have to choose your audience before saying what Arthur's best-remembered for, but his fiction is underappreciated, aside from, as you note, the rather minor (by me) AH & 3I books, except among those who love the ranges of short fiction he gamboled in...or who are fans of dramatic radio (and film adaptation), as he was behind THE WHISTLER as well as THE MYSTERIOUS TRAVELER (and edited the TMT magazine). More collections from RA...yes.

Duly noted, but in an age when even the concept of radio is sadly being forgotten (aside from popular music), I can't imagine anyone aside from Garrison Keillor best being remembered for radio work.

Ah...but THE WHISTLER was also a film series. And, sadly, the 3 INVESTIGATORS will probably get you a pretty blank look from most people much younger than we.