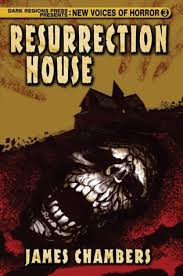 
I purchased a copy of James Chambers's Resurrection House alongside many other books directly from Dark Regions Press, a specialty horror press that produces attractive books. It was bought on a whim--I'd never even heard of James Chambers--but taking risks with reading is important, not just to potentially help discover new pleasures, but also to be more aware of what is available. In a market saturated by familiar names, many worthy reads are left overlooked.

Resurrection House is Chambers's first collection, and followed only by The Engines of Sacrifice in 2011. It is the third installment of DRP's series New Voices in Horror, which also includes collections by Michael Kelly, Angeline Hawkes and Steve Vernon. The volume is illustrated by Jason Whitley, with an introduction by C.J. Henderson.

I didn't care for the introduction, an excessively exalting piece that, rather than reflect on the work itself, astounds at how a normal middle-class person can write such dark fiction. The style of humour just isn't my thing.

The fiction itself is a good mix, selecting nine very different stories, to help showcase the author's versatility. Overall I enjoyed the collection. The two strongest stories are, without a doubt, "Mooncat Jack" and "Resurrection House," which provide a good execution for interesting premises. I also quite enjoyed "The Last Stand of Black Danny O'Barry" and "Refugees." My only issue with Chambers's writing in general, is the focus on abstractions, particularly in "Gray Gulls Gyre," which would otherwise have been a stronger piece.


Mooncat Jack     7/10
Mooncat Jack. MD: Die, Monster, Die! Books, 2002
Following the disappearance of some neighborhood children, a twelve year-old boy grows increasingly aware of rumours of "Mooncat Jack," a figure who takes unwanted children away. I tend to enjoy coming-of-age stories that employ an element of the supernatural, since the world is a strange and fascinating place to a kid. A good story that is even touching by the end. Though I anticipated the ending, it nonetheless had an affect on me.


Trick     6/10
No Longer Dreams, edited by Danielle Ackley-McPhail, Lee Hillman, L. Jagi Lamplighter and Jeff Lyman. Life Circle Books, 2005
An elderly widower is preparing to hand out treats for Halloween. He had lost his wife the Halloween before, and blames the children, believing them to be vessels of evil. This Halloween he is preparing his revenge. A quiet tale, not entirely original but satisfying in its briefness. The story in its entirety is available right here, on the author's website.


Gray Gulls Gyre     5/10
Dark Furies: Weird Tales of Beauties and Beasts, edited by Vincent Sneed. MD: Die, Monster, Die! Books, 2005
New Age healer Jennifer Truth returns to her childhood town at the request of an old friend's dying father. He believes she can save him from the spirit that has manifested itself in the gulls keeping vigil on his house. A good story overall, marred by some abstractions, and dry, expository dialogue. A little tidying would make it a far better read. The gulls themselves make for strong imagery. The dying man's departed wife's name, Marion, hearkens back to Robert Bloch and Hitchcock, Marion Crane from Psycho, a character named after a bird who awakens the passions of a man who performs taxidermy on our avian friends.


Refugees     7/10
Allen K’s Inhuman Magazine #1, July 2004
(Originally published as "by James Chambers and Vince Sneed," the latter is not mentioned in this printing, as sole authorship is given to Chambers.)

A small town high school outcast befriends the strange new girl who has recently moved to the sea-side town, bonding over their common interest in marine life. Despite the predictable nature of such a story, the emotional investment is present throughout, making it among the better reads in the collection.

The opening sentence is an example of a troublesome abstraction: "The odor of the bundle laid out across the back seat comes in waves that wrap me like the scent of guilt." (p. 53) I suppose this means the narrator is feeling guilty as a result of that bundle, but this is not what the sentence actually says. I like the image of the odor coming in waves, as we assume a moving vehicle, perhaps with windows open, and the scent strikes from time to time depending on movement or speed or whatnot. That's a good opening image, but here it is unfortunately tainted by a purple simile.


Resurrection House     7/10
The Dead Walk. Vincent Sneed, ed. Baltimore, MD: Die, Monster, Die! Books, 2004
An aimless young man purchases Resurrection House, a property where the dead become animated. The story is patient with its premise, presenting us character and mystery before revealing much about what Resurrection House actually is. Well constructed, the details fall nicely into place. Though the story relies on some pre-climax expository dialogue to tie up loose ends, this does not harm an overall good short story.


The Feeding Things     5/10
Cthulhu Sex, Vol. 2 #23, 2006
Womanizer Malcolm is gifted the power to seduce any woman he desires. In return, his seed destroys his lover and gives immediate birth to a creature that settles dormant in the sky. Not a bad story, but among the weaker ones.

The tale of Black Danny O'Barry, a rough and tough cowboy with a hidden fortune in gold who spends his nights drinking and whoring. Local bartender tells of the evening O'Barry visited the celebrated mysterious prostitute known as Ling. One of the stronger stories in the collection, with good detail and grounded writing.


The Tale of the Spanish Prisoner     7/10
WarFear. Bruce Gehweiller, ed. Marietta, GA: Marietta Publishing, 2002
Learning the strange tale of his his great-grandfather, a boy becomes a renowned composer and tries to re-create the strange events in his compositions, alienating the music community as the music becomes dark and terrifying. Another solid story.


Vicious Swimmers     6/10
Resurrection House. CA: Dark Regions Press, 2009
A group of soldiers infiltrates a marine research centre following an odd occurrence. An interesting concept but a familiar plot; not among the better stories.


Five Points     6/10
Resurrection House. CA: Dark Regions Press, 2009
A pair of New York City police officers investigate the odd occurrences in a dingy bar, and soon find that patrons have become possessed. The longest story in the collection, this one I found to be average, and overly long. Like "Vicious Swimmer," it was not previously published.

For more of this week's Friday's Forgotten Books, please visit Todd Mason's blog.
Posted by Casual Debris at 12:21 AM