For Part One of the series: The Doll 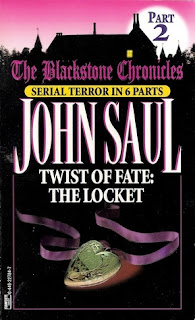 "The Locket" is the second novella in John Saul's Blackstone Chronicles. It is weaker than it's fairly average predecessor, "The Doll," but the broader story is made more interesting as characters peripheral to the main plot are further developed, generating expectations for their own stories in later chapters of the series. In addition, the focus on the peripherals helps crystallize the community and develop readers' interest in the over-arching tale.

We saw in the first part of the Blackstone Chronicles that a doll stashed away at the local derelict asylum was reclaimed by a mysterious figure and planted at the home of the McGuires in an act of unspecified vengeance. The goal was to destroy family harmony, which was successfully achieved. In the second part a locket is obtained from the same closed off stores of the asylum by the same mysterious figure, and delivered to another happy home, that of banker Jules Hartwick and family. Clutching this locket leads Jules to develop an outwardly aggressive persecution complex, which escalates in a straight line until the expected climax.

Saul makes sure to set up his victim as an all-around likable rich guy. The family members, parents and one grown-up daughter, Celeste, love each other undeniably. Daughter is about to marry a super cool dude who works at dad's bank and daddy dotes on him. They are good, community-oriented bankers who do good for their fellow townsfolk and, despite being top dog, daddy wishes good morning to all them common folk, like the tellers and what-not. He never even asks his female secretary to get him coffee! A true modern male role model. (Arguably, Saul could have created a female manager and a male secretary, but perhaps that was too modern for the bygone days of 1997. Alas, despite the date of publication and setting, the community presented in the series is an old fashioned one that hearkens back to Bedford Falls.) The streak of good people we have so mat in Blackstone is unevenly balanced by the few (I count two so far) "bad" characters, both dissatisfied middle-aged women who lack a man in their lives. Character depth is certainly not something this series boasts.

The fall of good people is tied to heritage, as we learn there are familial ties between the asylum of the past, where treatment of patients was less than ideal, to the happy families of today. What we do not yet know is the source of the vengeance, who is conspiring against the good folk of Blackstone, and from where doth ye olde magic manifest itself from. We also know that the local journalist has a supernatural connection with the asylum's past, and receives visions and headaches whenever something is up. As his pa was once curator or director or some such at the asylum, we can suspect that he will likely uncover the plot of vengeance that is a-brewing, using his reporter skills and advice from the kindly uncle. Uncle aside, he has no family so perhaps will not be the object of an asylum trinket, or perhaps kindly uncle will meet an awful demise in Book Six.

Overarching story aside, the plot of locket is a straightforward tale of paranoia. It escalates in a straight line, without twist or any deviation whatsoever, and the trigger is the locket that its victim Jules clutches. At least with "The Doll" there was a tie-in with the object, while the locket is incidental; might as well have been a crown or a ring or a hot dog. Without the greater story riding astride this plot, as a piece of fiction it would be unnecessary and un-publishable.

Posted by Casual Debris at 5:10 PM