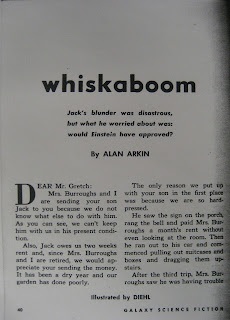 In the 1950s Galaxy Science Fiction, then edited by H. L. Gold, devoted space in nearly each issue to short, comedic science fiction stories, including prolific authors such as Robert Arthur, and less than prolific writers such as iconic actor Alan Arkin. It was under the editorship of Gold that Galaxy published Arkin's two short comedic science fiction/fantasy stories, "Whiskaboom" (August 1955) and "People Soup" (November 1958).

"Whiskaboom" is about a young scientific inventor trying to harness the fourth dimension, while "People Soup" deals with two children concocting a stew using all sorts of household ingredients. Both are genuinely amusing, well written and quite original, though of the two I prefer "Whiskaboom." The story does not appear to have been reprinted since its first appearance, though "People Soup" was included in Groff Conklin's inventive though unfortunately average anthology Science-Ficton Oddities (1966), and in the Galaxy collection Galaxy: Thiry Years of Innovative Science Fiction (edited by Frederik Pohl, Martin H. Greenberg and Joseph D. Olander, Playboy Press, 1980). Both anthologies were reprinted in two volumes, and "People Soup" was included in Science-Fiction Oddities (the first volume, 1969), and in the paperback Galaxy Volume I, 1981.

Arkin's first published science fiction story works well both as a humourous and inventive science fiction fantasy along the lines of R. A. Lafferty, but also works well as a parody of the outcast madly genius scientific inventor. The story is written as a letter from a Mr. Burroughs to a Mr. Gretch, explaining the events following the day he and his wife, Mrs. Burroughs, took on as a lodger Gretch's twenty-six year-old son Jack. The young man moves in, proving to be both dedicated to his work and rather moody, while the Burroughs's are concerned both about the incessant noise, that incessantly repeating "whiskaboom," and Jack's evidently declining health. 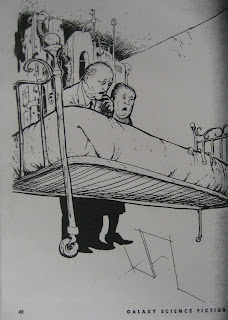 Spoiler: Well, rather than harnessing the fourth dimension as he had planned, Jack has "chopped off" the third, so that everything in the Burroughs home becomes two-dimensionally flat--including Jack. Being good upstanding churchgoers, Mr. and Mrs. Burroughs do their best to help the young man, pinning him to the bed so he won't blow away in the breeze, pouring tea and food into him in hopes of creating some lumps in his thin form, until finally they decide to send him back to his father via US post in one of those long document tubes.

As I mentioned, genuinely amusing and inventive. Though Mr. Arkin has gone on to perform wonders both on stage and on screen, it would be quite a treat to some day have a third inventive story from the multi-talented man.

(And just think of the lesson, of the many dangers of scientific investigation. Makes me glad to be a lowly writer.)

The artwork by Diehl is a little odd, though I'm assuming he (assuming he is a he) is attempting to capture a skewed dimension. Notice Jack's flat tri-fingered hand, reminiscent of The War of the Worlds, at the top of the bed, right of the drawing.

The story is signed at the end W. Burroughs, though certainly not a nod to the author of The Naked Lunch whose only book by then was published under pseudonym William Lee.

Mr. Arkin has also published, along with his recent memoir An Improvised Life, a number of books for children, most famously The Clearing (1986).

I hadn't realized that "Whiskaboom" hadn't been reprinted...I'll have to see if I have that GALAXY. Yes, "People Soup" is sf by no reasonable definition, but is a charming fantasy that Gold probably would've been happy to include in BEYOND if he'd been able to sustain that magazine.

Around 2000, Arkin published at least two stories in The Magazine of Fantasy And Science Fiction.

Thanks Jeff. I'm aware only of "The Amazing Grandy" in 2001. Can you tell me what the other story is?