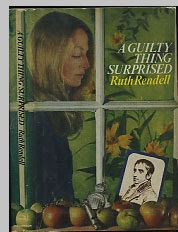 View A Guilty Thing Surprised:
at Goodreads.
at IBList.

My mom used to love these British cozy mysteries, Agatha Christie, Midsomer Murders and all the rest. In fact, she loved pretty much all forms of mystery, and it was through her influence that, as a highly impressionable pre-teen, I went through a mystery phase which included film and novels, though primarily short stories via those "Hitchcock"-edited anthologies. Over the years my mystery reading has become minimal, and having recently read and thoroughly enjoying Alain-Robbe Grillet's The Erasers, his post-modern murder mystery published in 1953, I decided to expand my experience of the more standard examples of the genre in novel form. I decided first off to acquaint myself with the most popular authors, everyone including Rendell, P.D. James, Patricia Highsmith, Jim Thompson and so forth.

I happened to have Ruth Rendell's 1970 Inspector Wexford novel A Guilty Thing Surprised lying nearby, so I picked it up and quickly read through the first chapter. It's the fifth of a series and my first. In fact I hadn't read any Rendell whatsoever, as popular and prolific as she is, and having now completed it I'm thinking the post-modern mystery is more my cup of tea. Not to say the novel is bad, in fact it's pretty good: well written, great dialogue, suspenseful and a super fast read. It is a little uneven though, its pacing shifting from slow character monologues to speedier sparring dialogues and a few moments of discovery tossed into the mix. It isn't as much as a novel of investigation but more a novel of hearsay, as Wexford ignores police procedure to pursue gossip. The novel's saving grace is really the additional thematic dimension that I feel necessary to genre fiction, and Rendell touches here on notions of sibling rivalry and the question of morality in terms of sexual freedom. 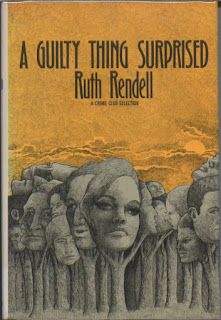 Briefly, the plot consists of the murder of the much-liked beautiful socialite Elizabeth Nightingale, a vain woman wealthy by marriage. She was struck repeatedly with a blunt instrument in the forest by her estate. Suspects include her husband Quentin Nightingale, her moody brother and Wordsworth scholar Denys Villers and his wife Georgina, the au pair girl Katje, the young pop-star-aspiring gardener Sean Lovell, his mother Mrs. Lovell, and the faithful Mrs. Cantrip (who really isn't much of a suspect but I was sort of hoping she'd be the unsuspecting murderess).

The somewhat older than middle-aged Chief Inspector Wexford appears fairly liberal, whereas his thirty-something year-old partner Inspector Burden is flat-out conservative, so their opinions on sexual behaviour differ greatly, as does their impressions of the sexual aspects of their current case. Among the suspects in Mrs. Nightingale's murder is her au pair girl, the young, sexually vibrant Dutch girl Katje, who in standard comedic practice even flirts with the married morally adroit Burden. Half-way through the book Wexford appears very human despite being the novel's, and the series's, chief hero. More than human actually, since at point he appears frail, a man with perhaps a few regrets tucked away with his years. The issue at hand is related to the revelation that the attractive seductress Katje has had relations with the much older Quentin, and Katje, rather than seeing Wexford in a sexual light, refers to him as old and tells him he reminds her of an uncle. This revelation and a brief interview with Katje awakens some hidden longings and even regrets. Sure the scene is brief and has nothing to do with the plot nor the investigation, but the added very real character dimension amid the sexual escapades is a great addition to the text. Not the usual thoughts that course through the mind of the standard series detective.

As per Mrs. Cantrip: "For, like the Bible  says, sir, woman is a temptation to man and no two ways about it." 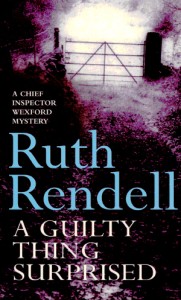 As for the denouement, I certainly won't be revealing anything more than Rendell had me guessing, thinking, and rightfully on the track of sexual delinquency.

Interestingly enough, my edition (not pictured), a 1980 mass market paperback from Arrow, has quite the cover, revealing both the murder weapon and the killer (to be honest that figure can represent two characters). Possibly a trend, so I'll avoid other Arrow publications of the period.

The title is from Wordsworth's 1804 poem (published in 1807) "Ode: Intimations of Immortality from Recollections of Early Childhood," also known simply as "Ode to Immortality."

Posted by Casual Debris at 1:43 PM