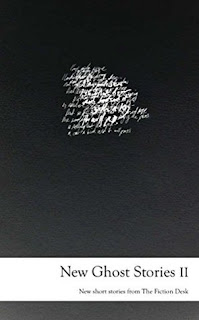 I have fallen behind in my reading of The Fiction Desk and other periodicals. Partly it's because I'm behind on all reviews, having been away, busy, and reading more contemporary fiction that I don't frequently review for this site. Partly it's because I haven't been reading periodicals as much lately, or short stories in general. Partly because my two and-a-half year-old is entertainment enough. And my reading lately has evolved toward picture books.

New Ghost Stories II includes eleven original short stories and a reprint of a medieval poem. Overall I did not enjoy it as much as previous issues, nor as much as their first ghost stories anthology, but there are some good tales included. Though many stories have a fantastical element, and those that don't have the suggestion of one, there aren't too many actual ghosts in the book. This of course is not a bad thing, since it offers a nice variety of subjects, from traditional ghosts to none at all, and some nice ambiguity in between.


Incomers by Amanda Mason     7/10
Emma and Jamie spend the New Year weekend at a port-side retreat where they've rented an old house. Soon Emma is troubled by feelings of a presence in the house, and of Jamie's seeming disinterest in her. The point of view is third person but limited to Emma, and we learn of her insecurities toward Jamie's bond with his former partner and of her feelings of inadequacy in relation to what are, essentially, Jamie's hobbies and interests. Meanwhile, through some acquaintances we discover the history of the house they are staying in, and of a certain scorned woman who once lived there.

"Incomers" is among the ambiguous ghost tales of the bunch. The existence of a ghost depends on the reader's interpretations, since there is no direct explanation offered. Personally I like the ambiguity, and my own rational leanings will conclude that the feelings of a ghost are the result of Emma's own heightened anxieties. Her suspicions that Jamie does not love her are founded on emotionally wrought, though likely accurate readings, evoke the sense of a ghost, and the eventual guilt for something clearly not her fault, despite her having secretly hoped for it. Ghost or no ghost this is among my favourites of the group.

Ms. Mason's other contribution to The Fiction Desk was also a ghost story and also quite good: "No Good Deeds" from the first ghost story collection.


The Bear Got Me by Matthew Licht     4/10
A government worker driving to a base in Alaska is chased by a ghost bear. Again closely limited to a single point of view, though here we have only one character and hence nothing external to interpret. The humour is not my thing and I rushed through the story as quickly as Garson rushed from that bear. Again, there is no evidence that the bear was there, ghostly or otherwise, and in the case of this story with its less than reliable narrator, I am left to believe it was a figment of the driver's overwrought imagination.

This is Licht's fourth appearance in The Fiction Desk, following "Dave Tough's Luck" (Various Authors), "Across the Kinderhook" (Crying Just Like Anybody) and "Washout" (New Ghost Stories).


Next to Godliness by Matt Plass     7/10
Strange occurrences in the home of a young couple lead them to suspect that their deceased little girl has returned home. Told through the father's point of view, it is the mother who wants to welcome the ghostly girl home, while the father is reticent. A strong story steeped in tragedy, well written and quite moving. Ghost or no ghost, the story's plot hinges on the possibility of a ghost and in that regard it is a ghost story.


The Table by Tamsin Hopkins     6/10
The death of the family matriarch reunites her husband and their three children. Told through one of the daughters' point of view, we learn that the mother had a vision of two girls seated perpetually at the titular table, a vision shared at one time by the children. A good and unique little read, it is also surprisingly touching, not just in its final moment, but with the notion of all we let go of as we grow up. "The Table" is most certainly a ghost story.


The Armies by Miha Mazzini     5/10 (Translated by Lenart Pogacnik)
A child's escapism from the unhealthy influence of his mother and grandmother's relationship. Not at all a ghost story since the visions are intentional figments of the boy's imagination, a form of escapism within the self. "The Armies" is, however, potentially more unsettling than many a tale of spectres, and can be included in the psychological horror category (if one were inclined to seek a seb-genre). This is Mazzini's second story for The Fiction Desk, following "I'm the One" from TFD4: Crying Just Like Anybody, and "In the Walls" from TFD6: New Ghost Stories.


The Time of Your Life by Lucinda Bromfield     5/10
After the sudden death of his father, a young lawyer inherits his father's position as well as his watch. The wearing of the watch leads to changes in our hero, and gives meaning to memories of his father's visits to a certain mysterious old man. The fantastical element is present, but not spectral, and though not a bad story it is somewhat lacking.


End of the Rope by Melanie Whipman     6/10
At school our young narrator is buddied up with the strange new girl in class, and the two outcasts soon become friends. Escapism and implications of abuse propel the narrative and the bond between the two girls. The title serves a dual purpose: escaping off the ground as well as from reality. The ending is reminiscent of some the original Twilight Zone stories of escapism. The ghost element depends once again on interpretation, as the narrator's vision at the end is not supported externally, and can hence be a creation of her own over-wrought imagination. Granted she is a trustworthy narrator, but recent knowledge and experience is helping shape her outlook on things.

According to her website, Melanie Whipman's first short story collection, titled Llama Sutra, is to be released later this year by Ink Tears Press, and based on this well written story, it's a collection to look out for.


Hell for Leather by Bernie Deehan     5/10
Technician Terry is called up to install a security system at a bar that is soon to re-open. The same bar that, in its initial incarnation, served as the launching pad for a tragic event in Terry's youth. "Hell for Leather" is a fairly standard ghost story and hence predictable. I don't mind the coincidence of Terry being the one to be called to the bar, but I am suspicious that an establishment that's about to have its grand opening orders a security system at the last minute. You'd think it would be one of the first things the owners would get organized, rather than leaving the place un-secure while the renovations and preparations are being done, especially when we learn the place is already fully stocked with booze.


Twice a Day with Water by Die Booth     5/10
In this one, loner druggie Bren hallucinates the existence of a "spirit" that enters his body whenever he consumes pretty much anything. An interesting idea with a strong ending, I just could not care for the character who is never quite fleshed out, but presented as an agoraphobic user and seeks sympathy from that fact alone. The ghost element is a figment in the mind of Bren, particularly in light of the fact that as she is presented, she would not be able to bake a cake or pour a glass of vodka. This is Booth's third appearance in The Fiction Desk.


Watching Kate & Gustav by Alice Adams     6/10
Trapped in the apartment in which she was murdered, a woman's ghost watches the new tenants and their gloomy cat, and attempts to reach out to them. A good story with an unfortunately flat ending. Something a great deal more tragic could have been achieved with the circumstances at hand, and while the implication of tragedy is there, it comes across as passive as its narrator. Despite this, I genuinely liked the narrator, our ghost, and new tenant Kate, and would have enjoyed reading more of their exploits.


In Yon Green Hill to Dwell by Jane Alexander     7/10
A woman is troubled by her husband's lethargy and the memory of his former lover. Well written with a strong ending, I was strangely not as engaged in this one as in some of the others. Alexander's story received the prize for best ghost story and despite my lack of connection with it, I agree with the decision. The story is not only well written, but its thematic elements are well presented. It was inspired by the Scottish traditional tale in verse, "Tam Lin," which is reprinted after the story.

Posted by Casual Debris at 3:26 PM