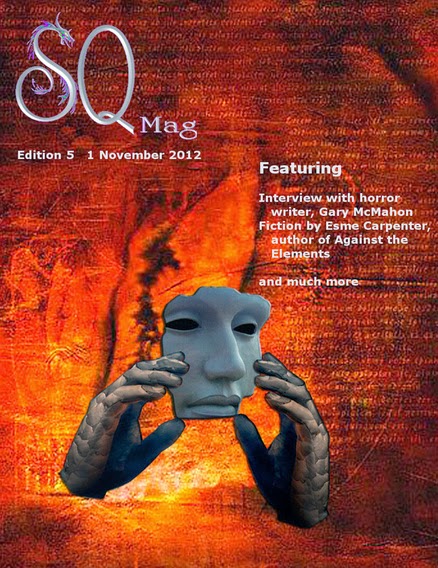 
SQ Mag is a free e-magazine from Australia which requires only an email for subscription, or you can simply read it online. Though I've been subscribing since the November 2012 issue, I've only now, seven issues later, finally gotten around to reading it. A speculative fiction and non-fiction magazine, it publishes science fiction, horror and fantasy, and the different intermingling subgenres of each. In fact, it promises to offer at least one story in each of these primary genres. Edition 5 contains five short stories as well as the fifth and final part of a serial, "The Searchers," by M.F. Burbaugh. Non-fiction is offered in various forms. There is an interview with author Garry McMahon, (by editor Sophie Yorkston), book reviews of two series installments, Deborah Harkness's Shadow of Night (by Mysti Parker) and Mark Walden's Earthfall: The Battle Starts Here (by Damien Smith), and a review of Rian Johnson's highly entertaining and sometimes loopy, loop-hole filled film, Looper (also by editor Yorkston).

It's the Holly Day story that makes this issue worth a read, though I have no comment on the Burbaugh serial, having missed the first four installments. (Yes, I know, I can check them out online, but I prefer my electronic reading on my ereader.) While the issue certainly maintains its commitment in offering genre variety, giving us space stations, vampires, and the post-apocalyptic, not to mention dolphins and horse-drawn carriages, overall the stories are flat and conventional, and even Day's stronger piece can use a little polishing. Though disappointed I will nonetheless read more issues since the mag does show promise. In addition, I read the issue in a day, almost entirely on bus and metro rides, so it makes for the often needful less concentrated quick reading.


The Memory Machine by Holly Day     7/10
At a house party something is greatly amiss. The adults are preoccupied with the well-being of little boy Bobby, whose vast knowledge lies in contrast with adult forgetfulness. With its near surreal opening, its sense of a fractured reality and the references to drowning, "The Memory Machine" is a story that slowly reveals itself, only half-way through allowing the reader to know what is actually going on. A tragic story in both its apocalyptic implications and in the more accessible aspect of parenthood. Somewhat reminiscent of the R.A. Lafferty short story, "What's the Name of that Town?" (Galaxy, October 1964). There is less quirky humour in this one, but the implications of mass memory loss in both are severe.


Azurewrath by Esme Carpenter     4/10
First person present tense tale of a werewolf dining among vampires. While invitations from one are often sent to the other, and hospitality is maintained, there is a mystery behind this particular evening's visit. Vampire's are equated here with stereotypical evil British nineteenth century landowners, while werewolves dote over their servants and children. Wonder who the good guys are? Not badly written, the story just isn't my cup of blood. I have a hard time taking vampire tales seriously, or stories where people say things along the lines of, "Good evening, my good man."


CSS by Warren Goodwin     4/10
Science fiction murder mystery/serial killer story. Our no-nonsense cop on a space station is investigating a series of gruesome murders of women in their twenties. Not a very good mystery or even science fiction story, it nonetheless has some atmosphere. Characters are flat and there is no real investigative process, with our stock anti-hero detective only accidentally finding and capturing the killer. Moreover, only late in the story do we learn that our bachelor cop has a lady friend, and guess whose in trouble? It lacks in the science fiction aspect since it tosses out some neat futuristic terms like insta-gloves, it does not delve deeply into the implications of its futurism. As mentioned there is some good atmosphere and the killer holograph has potential. With more fleshed out characters, patience, an investigative approach and twice the length, there might be a decent story here.


A Debt Called In by Michael B. Fletcher     4/10
After killing some thugs in a semi-self-defensive maneuver, a man flees from police and comes across a horse and cart. Desperate, he accepts a ride from the cabbie, but by then the reader has figured everything out. Reminiscent of some early television, including some Twilight Zone stories.


Bottlenose by Larry Lefkoqitz     4/10
Just when you thought it was safe to visit Sea World. At a US military dolphin training facility, Captain Sullivan has gathered his men (yes, they're all men) in order to piece together three recent deaths at sea. It appears quite possible that dolphins have killed these men. This is an idea story, so there is not much in the way of character or plot, just a lot of discussion on dolphin military involvement, alongside the movie Day of the Dolphin (which I actually enjoyed). Oddly, a critical comment on the film can also be aimed at this story. Another mystery whose reveal is conveniently tossed in:

Character: Who committed this awful deed?
Other Character: Must've been Bob, since he was there.
Bob: Drat! You found me out! My motive is I thought I was doing something good, but it turns out I am MAD! MWAHAHAHA!
THE END

Posted by Casual Debris at 4:45 PM